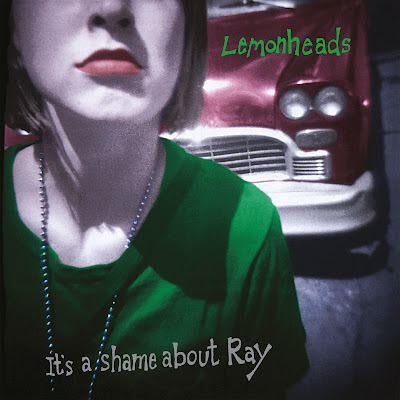 It's A Shame About Ray, one of my all-time favourite albums, is 30 years old!

And it's 30-minutes of joyous guitar pop! Always has been, always will be. Sometimes it's guitar pop with a punky edge, sometimes with real melancholy, others with a country tinge to it. Sun-kissed, but naturally warm anyway, this is a real gem of an album that has aged beautifully.

The combination of acoustic and electric guitars is one that still wows me all the years down the line. Evan's vocals tug on heart strings. The storytelling is exceptional and Juliana Hatfield (bass and backing vocals) and David Ryan (drums) gel with him superbly.  Nic Dalton played bass on Mrs Robinson (added on as a bonus on the initial reissue only months after the album had been released) and would go on to replace Hatfield.

The friendship/romance with Juliana and the link to the Australian music scene where Dalton was central thanks to his Half A Cow label, band Sneeze and friend Tom Morgan of Smudge, brought out the very best in Dando.

It was arguably the most stable and supportive period of his life and career. Everything came together, before it very publicly fell apart. 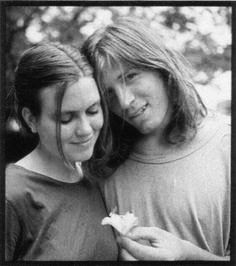 Now reissued with loads of bonus tracks (on vinyl for the first time; it's time to revisit It's A Shame About Ray and all the added extras in feature length blog taking in Evan and The Lemonheads celebratory show at Glasgow's QMU and then a look at the album track by track. 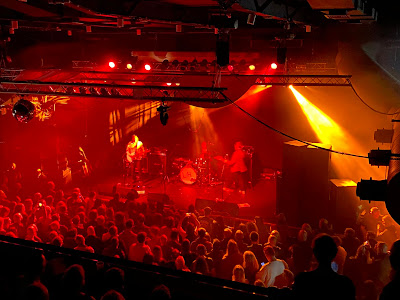 The QMU was sold out and absolutely rammed. Fortunately we (me, my sister Carla and friend Paul) got a great position standing upstairs with an excellent view.
Evan ambled on stage to a huge roar and started with Being Around before going straight into The Outdoor Type, two of my favourite Lemonheads songs. Dando was in fine form throughout, joking with the crowd and enjoying an early heckle of play a fast yin. The crowd were in fine voice from the start, singing along tenderly. Hard Drive from his Baby I'm Bored album was gorgeous, leaving me all fuzzy inside, as did All My Life. And Evan's version of Into Your Arms could thaw the coldest heart.
Before long he was joined on stage by the latest incarnation of The Lemonheads for a romp through the classic album.
The band barely paused between songs, sometimes they just went straight into the next. Evan's guitar screeched, soared, stunned and went straight into my heart. His latest rhythm section kept things tight and allowed him to play.
After the ... Ray album the band were off, on, Evan was off and on and behind drums and we were treated to 45-50 minutes of fun via Evan's back catalogue and some of his favourite songs. There was a setlist taped to the stage but I'm not sure how often it was referred to!
Hospital, Break Me, Tenderfoot, a euphoric romp through If I Could Talk I'd Tell You (joined by friend and co-writer Eugene Kelly on stage), Big Gay Heart oozed with humour and soul, Different Drum, Stove ... brilliant stuff.
Taking requests during his acoustic session, Evan played a beautiful Favourite T and hearts melted. Then Evan clambered behind the drums and sang along to his own beats; Al Stewart's Time Passages and the Jackson 5's I Want You Back. Great fun.
Closing with another request, the incredible Ride With Me, Evan unplugged his acoustic and stepped to the front of the stage for the final section, before jumping down to high five some of the crowd.
What a show. What a guy. What a band.
My friend Bobby Motherwell on Facebook was also at the show and posted this when he got home;
Magnificently shambolic, mistake strewn poignancy, emotionally stark, raw and funny. But those songs ... those songs.
Bobby captures the show perfectly. 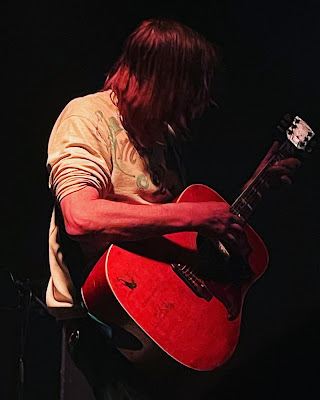 Now for the album; track by track.

Opening with the 1 minute 45 second blast of Rockin' Stroll, you're immediately into the world of Dando's Lemonheads. A little riff and then a flowing, tumbling rhythm with Dando telling the tale of life through the eyes of a kid in a buggy people's knees and trunks of trees, smile at me.

Yet Dando could be singing about life through his own eyes as he sings;

Rockin' Stroll oozes warmth, the riffs and the way the band hurtle through it is just joyful.

Another flowing rhythm riff ushers in Confetti, words spilling out of Dando in a ridiculously hooky manner. The whole song is like a big chorus, there is a little guitar break at 56 seconds and then a guitar solo for 30-seconds at 1-minute 46. And I love the little scrape along the fretboard at 2 minutes 22.

He kinda shoulda sorta woulda loved her if he could've

The story's getting closer to the end

He kinda shoulda sorta woulda loved her if he could've

He'd rather be alone than pretend

Promo around the 30th anniversary highlights that Evan wrote the song about his parents divorce. Hiding dark and deep thoughts within bubblegum guitar pop. Dando looks super fresh and cool in the video. 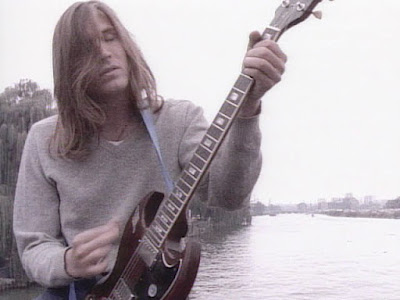 I remember an old school friend called Craig Richardson showing me the chords to It's A Shame About Ray. They were so simple that even I could play them. Although the little riff before the start remains beyond me! A co-write with Tom Morgan, Ray flows along in dreamy, sunshine-y kind of way. I used to drive about the back road of Carluke down to the Clyde Valley, or to Lanark with this on the car stereo.

If I make it through today

I'll know tomorrow not to leave my feelings out on display

I love the feeling to Rudderless, it's really reflective, almost tinged with sadness. Even the chords Evan plays at the start sound a little sad, but beautifully so. 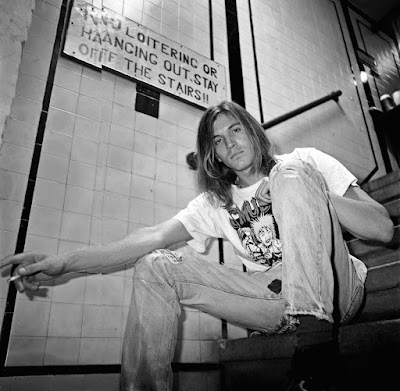 My Drug Buddy is, at least for me, one of the most beautiful songs in Evan Dando's locker. Telling the story of his friend/lover coming over to go a walk to  score drugs, My Drug Buddy is sung with real feeling, it sounds beautifully melancholy. The way Evan and Juliana harmonise on I'm too much with myself, I wanna be someone else is so dreamy it hurts.

She's in the phone booth

And I'm looking in

There comes a smile on her face

There's still some of the same stuff they had yesterday

There's still some of the same stuff they had yesterday

The organ adds to the lazy feel of the song, this is peak Dando and Hatfield together.

The Turnpike Down is a short song, kind of country punk, repeated twice. I love the line between a want and a need to.

The Turnpike Down, Evan Dando in Sydney

I'm a sucker for the Dando and Morgan co-writes. They are so simple yet so clever. Bit Part is only 1 minute and 51 seconds long. Acoustic and electric guitars collide, the lyrics are brilliant, the solo is fizzing, Juliana compliments Evan perfectly and it builds to a brilliant climax with Dando hollering the final verse/chorus - it's all one in this song. 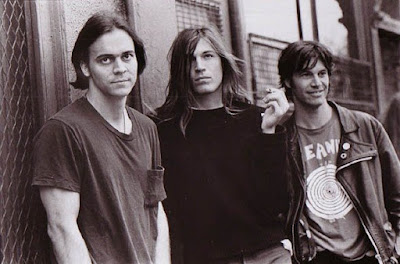 There is a line in Alison's Starting To Happen that is one of my all-time favourite lyrics.

She's the puzzle piece behind the couch

Made the sky complete

2-minutes of perfection. A pop punk romp about Alison Galloway from Tom Morgan's band Smudge. Dando and Galloway were on ecstasy and he came up with the line Alison's Starting To Happen.

All these years (decades!) later, this song still sounds like the band are having so much fun. The Lemonheads were really in the zone on this album.

Jeff 'Skunk' Baxter joins the band on slide guitar for the sublime Hannah & Gabi. It's a beautiful song, the guitar playing is so inventive and melodic. I would often think of this song when I was on the train to Glasgow as a teenager, watching a girl who got on from Lanark. I'd try to catch her eye in the reflections of the windows. This and Norman 3 by Teenage Fanclub were my songs for her. I had a major teenage crush. We eventually talked, but no more than that. Really up there with the most gorgeous Lemonheads songs.

Nic Dalton wrote Kitchen and it really emphasises how effortlessly he fitted in with Evan and the ethos of The Lemonheads around this time. Further cementing Evan's bond with Australia. The bassline practically bounds out of the speakers, the vocal melody is deliciously fast and again Dando & Hatfield harmonise with ease. I love the closing 42-seconds - the sound of a band having fun jamming along.

Ceiling Fan In My Spoon is 1 minutes 47 seconds of psychedelic melodic babble, it has a harder and punkier edge to it than anything else on the album. 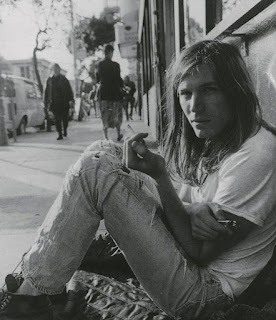 Evan's cover of Frank Mills is just perfect. It fits so well with Dando's move towards telling more stories through his own songs and also with the way he continued to highlight his taste in music through acoustic covers. And with the whole sunshine-y, stoned vibe to the album.
He was last seen with his friend, a drummer
He resembles George Harrison of The Beatles
But he wears his hair, tied in a small bow at the back

Of course, It's A Shame About Ray has been re-released several times, including once not long after the original release date to include The Lemonheads cover version of Mrs Robinson. A pop punk bubbledum performance that introduced the band to many. Would the album still have broken without that addition? Who knows, who cares, it's a f**king brilliant album and I'm sure it would have found its way.

In terms of 30th anniversary bonus tracks, we have songs from Evan's trip to Australia; covers of Divan by Smudge and Shaky Ground by Sneeze. The latter featured in my Trust Me series of blogs.

Check my 10 songs by Smudge here.

We also have a KCRW radio session of My Drug Buddy, an acoustic cover of ABBA's Knowing Me, Knowing You and demo versions of songs on the album. It's interesting to hear Ceiling Fan In My Spoon in that form.

It's A Shame About Ray is sun kissed, warm, melodic, romantic, funny and the sound of a songwriter not only finding himself, but friends. 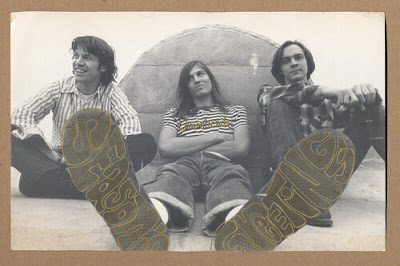