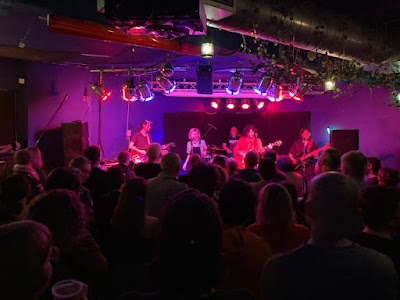 Poster Paints released their self titled debut album earlier this month, following it up with a joyful launch party at The Glad Cafe in the Southside of Glasgow.

Support was from Flinch, a 4 piece outfit who have self released their album Enough Is Enough on vinyl. They display a punk indie pop energy on stage and off. Fanzines, pin badges (support your local girl band) and stickers, harmonies, fuzzy & reverb laden guitars, hooks and harmonies.  Expect a separate blog on Flinch in the near future.

Poster Paints played all 12 songs released to date. Their 10-song album, plus Blood Orange and their loving cover of The Lemonheads Into Your Arms. It was the best I've seen them play. Simon Liddell creates wonderful sounds from his guitar, little riffs and chord progressions that just sound sublime, whether gentle and fragile, or dreamy, shimmering and bursting with sunshine energy.

My sister Carla sang beautifully. I honestly think it was the best I have seen and heard her sing. Her voice could be sweet and tender, or it could rise and soar, sometimes to dramatic effect.

Backed by Calum Muir on drums, Suse Bear on bass and Kim Grant on ryhthm guitar, with Lomond Campbell duetting on Ribbons, Poster Paints created beautiful music that left everyone in the audience beaming.

On to the album. 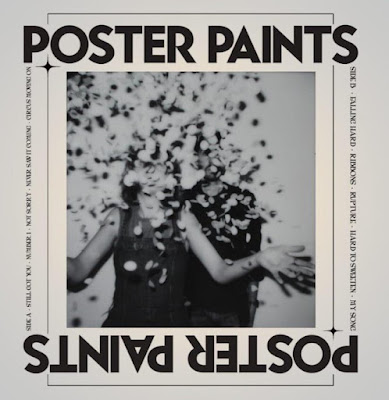 As summer becomes a distant memory and autumn unfurls in its uncertain, bittersweet glory Poster Paints are here to provide the perfect soundtrack - all hail the unique undimmed beauty of Scottish pop.

I still remember the first time I heard Poster Paints. I was out at our Mums house in Carluke and Carla messaged me asking if I'd like to hear some demos. The answer, of course, was yes.

It was October 2020 (I just checked my old emails). With the kids happily playing with their Gran, I decamped to our Mums wee summer house in her garden, sat in a chair with my headphones on and pressed play on a song called Circus Moving On. Within a few minutes I pressed play again. Then I moved on to the other song titled Not Sorry. Also playing it again immediately afterwards.

Both songs moved me. The slowness of Circus Moving On, the gentle keys, the ache in Carla's voice, then the strings and Simon's guitar coming in ... the flow of Not Sorry .... they didn't sound like demos.... I messaged Carla to say they were the best songs she had done. They felt more wordly, more mature, but still with the vivid imagery through the lyrics and tumbling and catchy melodies that are Carla's key strengths.

Simon's arrangements were sublime. There seemed to be so much space in the music, yet there was also still so much to appreciate with each listen.

Later in lockdown Carla had tweeted out a message asking for band names as she and Simon now had enough songs for an album. She phoned me up and I was in our back room (formerly my music room, meant to be a playroom, but essentially a dumping room for toys/washing etc) having just finished a #timslisteningparty with a few beers. I looked at the mess around me and suggested names like Blue Crayons, a few others that Carla meh'd at and then Poster Paints, which she seemed to like.

And that was that. I named a band!

Two years down the line and the album is out on Olive Grove Records & Ernest Jenning Record Co.

Proceeded by a string of singles that built momentum, the eponynmous album is gathering a lot of love from those who discover it. 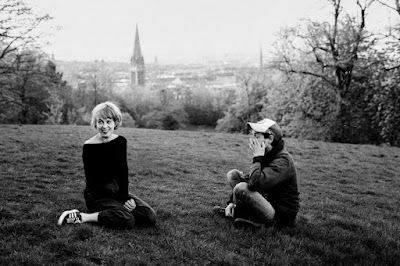 And it's easy to hear why.
The album floats gently and dreamily into life with Still Got You. At 1-minute 19 seconds the song drifts beautifully, everything cutting out as Carla sings
I've still got that taste
In the back of my throat
The swallowed secret
That makes me choke
Liddell's subtle, shining and shimmering guitar sounds hazily gorgeous over lazily funky beats in the closing minute. It's an absolutely stunning opening.
The pace changes and quickens with debut single Number 1. It's chiming guitar pop with Spector-esque beats. Kids are so naive, I wear my heart on my sleeve, cause baby you're my number 1, baby you're my number 1 is a brilliant chorus. There is a sublime instrumental that takes us to a final refrain.
Not Sorry slows things down again, the verses have so much space for the reflective lyrics, building to the chorus where Liddell's guitar bursts to life to back Carla singing.
My favourite memory of you will be of you in the morning
Never Saw It Coming was the second single that Poster Paints released back in August 2021. The flowing melody and guitar riff are beautifully entwined through the verse, leading to the chorus and the realisation of love lost.
I can't believe you're gone
I never saw it coming
Reflection and realisation come across in the lyrics throughout the album. I think they are the best that my sister has written. Equalled by the flowing melodies that deliver them. Her voice has matured beautifully and just seems to fit perfectly with Liddell's arrangements.
A splash of psychedelia/dream pop in the middle section is just lovely. 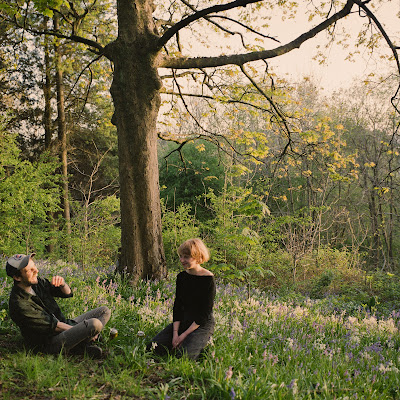 Circus Moving On is one of the best songs I've heard this year. Floating and gliding beautifully through the verses, it's mellow, tender and dreamy. Then ... at 48 seconds ... the slow burning star becomes a shooting star lighting up the night sky at pace. A double chorus is delivered with strings, beginning with the lines;
You say I need to walk before I float
But I'm already flying every day
Falling Hard is a pure pop sugary jangly rush, with Easton singing defiantly giving up is not on the cards, when I fall, I'm falling hard. Liddell's guitar jangles, chimes and fuzzes through an instrumental that takes us back to the chorus, one that you may well  find yourself singing after one or two listens.
Lomond Campbell is someone my sister has known for a while and I know that she was absolutely delighted to get the opportunity to work with him on a song. Ribbons aches beautifully, vocals and music are just sublime. Liddell's guitar in harmony with his friend Jonny Scott on drums.
There is plenty of space in the arrangement, playing and production. Everything seems to beautifully unrushed and dreamy.
Campbell & Scott are just a couple of the guests that the duo roped in. Both have declared that it was easier than normal to ask friends (from across the world - see below) to contribute to songs during lockdown restrictions. Ambitions helped by Creative Scotland which ensured that all musicians were paid. 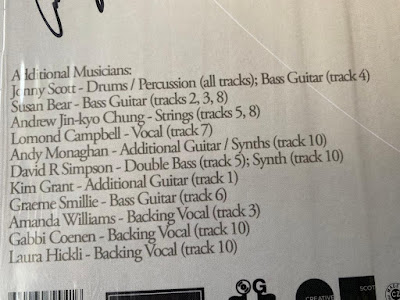 Poster Paints started when Simon sent Carla a piece of music and asked her to contribute some ideas. Easton wrote lyrics and a melody and returned a completed song. That song was Rupture, so it's only apt that it is included on the album. Liddell's guitar has a dirty jangle to it, taking an abrupt turn at 1 minute 25 seconds to chime. Easton's voice rises in the second half of the song as again she reminisces about a lost love, reminded of this every time she smokes cigarettes, I guess that's why I smoke them as much as I do.
Hard to Sweeten is a real favourite. It's like a lullaby, a truly special song. Guitar and keys/synth, draped with the most gorgeous vocal my sister might have sung to date. The closing instrumental section is just sublime.
I was warned of love like yours, that's hard to sweeten
I adore a fire that burns, that scars me deeper
Another favourite is album closer My Song. This song builds slowly, surely and sublimely with Carla singing to a lost love I have you the chance to, have and to hold me. At 2 minutes 27-seconds the song begins to soar and glide on a gorgeous guitar riff, New Order-esque bass and synth. You get 2-minutes of this, but I would love an extended 12-inch remix stretched to at least 8.
Poster Paints album is out now. Order online (can be delivered from the UK or the USA) or check your local record shop. Check a track by track run through by Carla HERE
What next for the band?
Well they have been offered the chance to go to SXSW in spring 2023. Exciting ... but ridiculously expensive. Personally, I just hope they keep writing and recording. Simon and Carla have conjoured a collection of magical songs and have an amazing pool of friends they can call upon to create the sounds in their heads. With this album, they've brought out the best in each other. 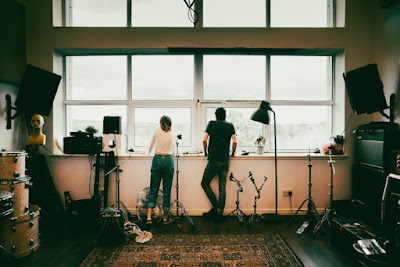