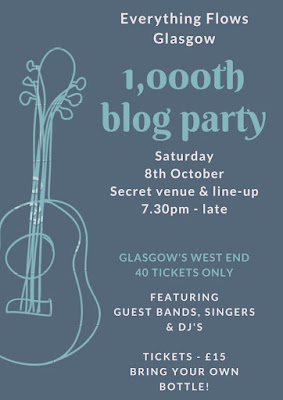 On Saturday night I put on a wee night at La Chunky Studio in The Hidden Lane, just off Argyle Street in Glasgow. In hip happening Finnieston.

I put 40 tickets on sale and within a couple of social media posts, all were bought in just a few days, even though the line-up was a secret.

There were a couple of changes to the line-up in the weeks leading up to the event and unfortunately a train strike meant a few people couldn't attend, but everything came together on the night.

I first came across La Chunky through my sister Carla's first band Futuristic Retro Champions. They recorded an EP in the studio and also played a very memorable gig outside on a glorious sunshine day for the old Hidden Lane Festival way back in 2010. I've stayed in touch with Ronan, one of the owners and was delighted when he said he'd be up for hosting a small night.

My friend Phil DJ'd before, between and after the live acts, wowing us all early on with an edit of Bowie's Young Americans. The lights were dimmed and friends started to stream in to the back room of La Chunky which had been turned into an intimate venue for the night.

Jenna always used to generate a reaction in the Futuristic Retro Champions days and it did again on Saturday night, but in a different way. The tale of friends forgetting worries for nights out sounded beautiful, stripped back to just Carla and her trusty Juno keyboard.

New song Sugar Honey Ice Tea hit a mark. Carla told of how she wrote it after being afraid to walk home alone in the dark and a few people in the crowd told me how the lyrics resonated with them. The demo is on a Fanclub CD that we've been playing in our car and the girls sing along with it as it's super catchy. Thankfully, they don't know that the lyrics have a darker edge. Sadly, one day they will. There is still so much to be done to help make women feel safer when walking alone at night.

Closing with Poster Paints Number 1 ahead of the album being released next week, Carla's voice sounded as crystal clear as I have heard it. I'm so glad Carla could play and open the night. 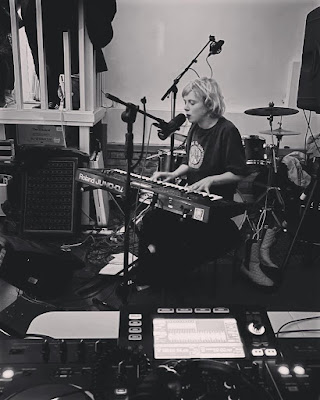 Then next up was my band Starboard Hazes. I think we just about passed the audition! Raw n fun indie pop. It's been such a rewarding experience to form a band. Initially it was just my friend James and I working on old songs I had written many years ago. Then, after recording an EP, we decided we wanted to play and recruited James' friends Andy on bass and Jamie on drums. We only got together for the first time on 1st September and we immediately gelled.

We played; 1. Out Of My Mind 2. Yeah! 3. Keep On Dreaming 4. Beta Band Blues (with Ronan on trombone) 5. Kicking Our Heels 6. Reflected Sunlight

I think we'd had 6 practice sessions. Maybe just 5. But we played well (a few mistakes but nothing major). We only had one very quick practice with Ronan on trombone for our song Beta Band Blues, but he was great, playing on the balcony section and jamming brilliantly (video below). We loved it and it was nice to receive some positive feedback on the EP and show. 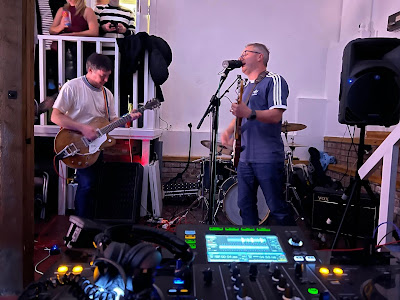 Stephen Farrell AKA Stephen Solo has featured heavily over the course of this blog. With his band Sonny Marvello and then under his solo guise, releasing majestic DIY pop recorded on his iPhone/iPad - in his car, in his bathroom, behind his sofa, under bed sheets ... sublime dreamy melodies, heartfelt lyrics, insane imagination, all kinds of sounds and ideas.

In typical Stephen fashion, he'd spent ages working on backing tracks, beginning with him recording his worries about playing live for the first time since 2019. It broke the ice beautifully. Humour and honesty.

Suddenly Heaven soared with ease, new song Losing It Over You was super catchy and I'd forgotten how good Plastic Heart from the Pii album is. The way Stephen switched from vocal effects to the purity of his voice sounding super dreamy reminded me of Damon Albarn's work with Gorillaz.

Behind Your Eyes was one of the first iPhone recordings that Stephen sent me a number of years ago (must have been 2015) and I urged him to do more. The Albarn reference above was one that first came to me on the beautiful refrain.

Behind your eyes, I'll be waiting

It's so dreamy, you could float away with the melody. The little synth riff in the background is gorgeous. Then you have the crazy but clever verses.

Sonny Marvello's Whispering Song was utterly magical. The way Stephen pulled back from his microphone to sing from the bottom of his heart was spine tingling.

Who are you, who are you to hold me in your arms?

Crying Because, backed only by a blue ukulele was fragile and beautiful, interrupted slightly by someone having a sneezing fit.

And then we had some audience participation for Sonny Marvello's hit that never was - Made of Magic. The super catchy pop had everyone singing the chorus M - A - G - I - C what you're made of, is magic. 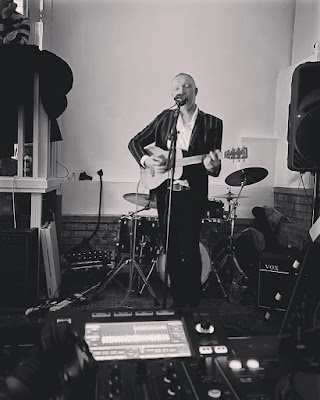 It was then time to dance the night away with DJ Phil Redfearn on the decks. Phil immediately kicked off with Come Together by Primal Scream. The Weatherall mix from the classic Screamadelica album. You'll see from the video below that he really got the party started!

People did come together for live music and to dance. And it was brilliant. The night ended with an encore, after shouts of one more tune, of Phil playing Neneh Cherry's Buffalo Stance followed by everyone getting together to hug in groups to The Beatles All You Need Is Love.

We must do it again.