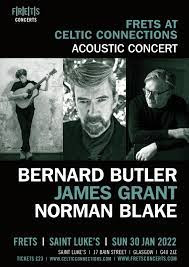 I'm still basking in the warm glow generated by Sunday night's Celtic Connections show in the wonderful setting of Saint Luke's in Glasgow. Everyone attending was especially glad of the warm glow when they left the venue into howling wind and pouring rain!

Three incredible songwriters and musicians are behind my good feelings. James Grant, Norman Blake and Bernard Butler were brought together by the FRETS team in a kind of songwriting circle environment.

The trio lined up across the stage, each taking it in turn to tell the story behind the song they were about to play, before all 3 would then play the song. Their banter was genuinely hilarious. James Grant - total deadpan, Norman Blake - surreal comedy stories and Bernard Butler - just about keeping up with it all.

Picture by Neil MacAllister
Brilliant banter and stunning songwriting. Grant kicked it all off, discussing how they wanted to be billed, rhyming off their names in various orders before declaring his personal favourite - Grant, Blake & Butler.
Looking resplendent in cowboy shirt and with super sleek hair, Grant started with State Of Art, laying down a marker to his friends. Norman followed with I Don't Want Control Of You, although he couldn't remember what album it was on. I particularly love this song when it is stripped back, the heartfelt meaning of the lyrics shines that little brighter. Butler then played Although, demonstrating a strong and soulful voice along with his impeccable guitar playing.
Butler's hair was impeccable too. Thick and long, he continually flicked it from his eyes, only for it to fall immediately back again. My wife and friend Lorna swooned.
Yes, the euphoric single that Bernard wrote and released with David McAlmont in 1995 was my highlight of the night. Butler highlighted his friends incredible vocal, going on to say there was no chance he was even going to try and replicate it. The trio went on to deliver a rich and soulful version, with Blake and Grant providing excellent backing vocals at the end.
Thanks to Derek Kirwan for capturing it HERE but please check this rip roaring version from Later with Jools recorded back in the day - simply sensational. Whoever was on after them must have been thinking .... what the .... 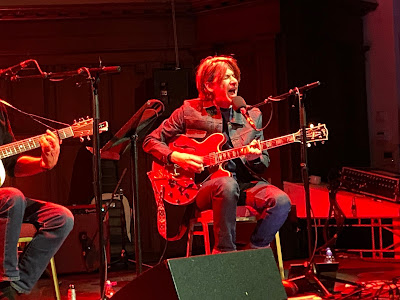 Norman introduced Teenage Fanclub's seminal debut single by saying he had recently found the test pressing up in his parents loft,  the trio played a beautiful kind of Teenage Fanclub Have Lost It version. Afterwards, Bernard spoke with genuine affection for a moment when he was invited on stage to play Everything Flows with Teenage Fanclub in London, just before he left Suede. It was his favourite song then and his favourite song now. He made a little joke about knowing the direction he wanted to go in, before playing a beautiful version of The Wild Ones. Bernard also highlighted he was still using the same guitar from that very night.
Grant oozed confidence throughout. I'm not very familiar with his work at all, but I'll be digging into it over the months ahead. His songs were first class, Last Ship On The River (with Love and Money) was really beautiful.
I didn't expect to hear Norman stripping back The Concept, but, with the help of James and Bernard, he delivered a beautiful version, complete with long outro. Butler's guitar playing was exquisite. 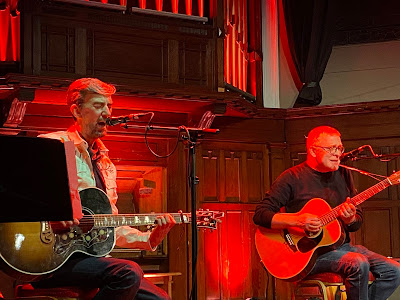 After a rapturous reception and clamour for an encore (three more tunes, three more tunes) Grant, Blake & Butler closed with their three voices and guitars gelling on Neil Young's Cinnamon Girl, with Grant highlighting Young's stance against Spotify through the week.
I do hope FRETS brings this trio together again. I do hope the sound engineer recorded the gig! Check the full setlist below. This was a real treat of a show. 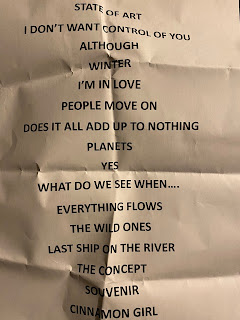