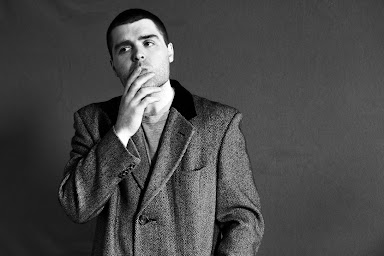 My sister had been banging on at me to check the Callum Easter album for age until I finally did, prompted by a longlisting for the SAY Award 2020.

I'm so guilty of this. In an age where it is incredibly easy to check out any artist, album or song, why do I not do it when I receive a strong recommendation from someone who knows my taste? Is it just because it is too easy? Back in the old days, when music wasn't as accessible, people would make mix tapes, copy albums on to CD or even lend a copy. So you'd go home and listen to it to check it out. I would buy both the NME and Melody Maker on a weekly basis and then enjoy hunting records down, enjoying the anticipation of a release date or a special trip into the likes of Missing Records to search for something.

Anyway, enough about the old days, the main thing is I discovered the Scottish artist Callum Easter in 2020, a year later than I should have!  I could have caught him live if I'd been on it!

Callum releases via the excellent Lost Map Records label and his debut album Here Or Nowhere is a beautifully varied affair with synths, beats, organs and anything Easter can get his hands on. I love the feel, atmosphere and vibe he creates and I do look forward to seeing him live whenever that might be! There is a bit of early Beck to Easter - that kind of need to create, lets see what happens, push record, lost in his own world, don't give a f**k about anything else. This creates a feeling of freedom in his music.

One of the songs I have really fallen for isn't on the album. Feelings Gone was originally released on a mini-album Get Don't Want Out a few years ago (pre Lost Map days from my research), then as a b-side (a live version) to the single Here or Nowhere/Back Beat, then again as the closing track on the Green Door Sessions album from earlier this year. It's clearly a song Easter himself is fond of.

The original version (video below) has a synth riff over a solid bass and beats. Easter plays on the mantra like hold me and the feelings gone. It's a song that just grabs me immediately and as soon as it is over I want to play it again. It has something pure and simple - soul.

With the live version, I love the lo-fi soul feeling Easter conjures from an accordion riff over an old drum machine beat, beginning by repeatedly singing;

Easter develops the song a little for a verse;

What we're saying is there's two kinds of people

What I'm saying is it's more like it's me and you

The whole song has (pardon the pun) a great feeling to it. This is number 18 in my Trust Me series. See below for the list of previous songs to feature. Search for Everything Flows Trust Me on Spotify for a playlist of all songs, or CLICK HERE

1. Something On Your Mind by Karen Dalton
1A. Crimson and Clover by Tommy James and the Shondells
2. I Am, I Said  by Neil Diamond
3. Where's The Playground Susie?   by Glen Campbell
4. If You Could Read My Mind by Gordon Lighfoot
5. Gimme Some Truth by John Lennon
6. Gone With The Wind Is My Love by Rita and the Tiaras
7. In The Year 2525 by Zager and Evans
8. The Music Box by Ruth Copeland
9. The Ship Song by Nick Cave
10. Sometimes by James
11. I Walk The Earth by King Biscuit Time
12. Didn't Know What I Was In For by Better Oblivion Community Centre
13. When My Boy Walks Down The Street by The Magnetic Fields
14. The Man Don't Give A F**k by Super Furry Animals
15. All Flowers In Time Bend Towards The Sun by Jeff Buckley and Liz Fraser
16. Are You Lookin' by The Tymes
17. A Real Hero by College & Electric Youth