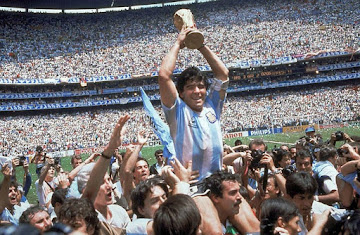 The mere mention of Maradona's name makes me smile and reminisce.

I was 10 in 1986, when Maradona inspired his team to win the World Cup in Mexico. I remember that summer being sunny and hazy. My life revolved around football. My brother and friends would play morning, noon and night on the field across the road from our house, only stopping for drinks, snacks, lunch, dinner and for a 10p mix up from the ice-cream van in the evening.

Sometimes there would be a few of us and we'd play what we called 'pass-y shoot-y' where someone would go in goals and the other 3 of us would pretend we were in a game, making up moves and skills and I would commentate.

Other times we would play 'world cup / cuppy' where there would be a keeper and he would throw or kick it out and 5 or 6 of us would justle for the ball and then attempt solo runs to get a goal, or you could poach/mooch around the goal hoping for a rebound. You had to score a goal or two to get through to the next round, someone would go out and eventually you would have 2 players in the final. Sometimes we would play 'cuppy doubles'.

And then, usually in the evening, there would be enough players for teams. Anything from 4-a-side to 8-a-side. Even kids who didn't like football would get pulled into make up the numbers. The field was where everyone in the estate would go to hang out; either playing or watching football. There are hardly any kids in the estate any more as most people who stayed there in the 80's still stay there. The kids have long left and now have kids of their own.

I always feel sad when I see new estates being thrown up with no patches of grass or playing fields for the kids to play on. Every patch of ground is used for housing, it's  shame. 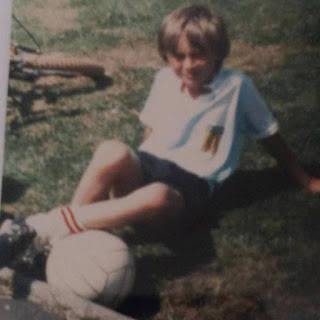 For the summer of 1986 I wanted to be called 'Muradona'
It didn't catch on!

Back in 1986 there wasn't a great deal of football on TV. Scottish football was really highlights on Sportscene on a Saturday night and then Scotsport on STV on a Sunday. There would be the occasional live match, I always seem to remember the Skol (League) Cup Final being live on TV with a couple of thrillers between Aberdeen and Rangers.

So when the World Cup came around it was like a feast of football! Maradona was just sensational. He would set off on solo runs regularly, either winning fouls, or creating space for his team mates. And then of course there were the goals.

Maradona scored 5 goals and created 5 goals during Argentina's run to winning the World Cup. Despite all kinds of attempts to stop him, by fair means or (largely by)) foul, he was simply unplayable.

Watching Maradona was as exciting as anything I can remember. You were willing him to get the ball to see what he would do with it. His low centre of gravity (5ft 4), stocky legs, insatiable desire to run forwards through walls of defenders, riding high tackles, waltzing round people with a dink of the shoulder, lifted not only his team, but his country and football fans around the world. 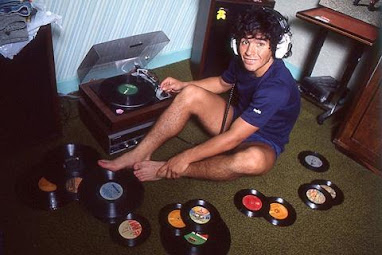 A young Diego checking some records in 1980

After his breathtaking solo run against England everyone wanted to 'do a Maradona' out on the park across from our parents. There was a distinct lack of passing and crossing for a while as everyone set about trying to beat the entire team on their own.

Post World Cup football fans set about trying to get footage of Maradona. I remember we bought a VHS documentary on the world cup as well as VHS cassettes of Italian goals of the season and things like that. 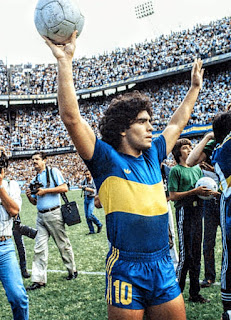 Maradona carried his World Cup form into the 1986/87 season with Napoli, leading them to their first ever Serie A title. It should be noted that no team from the south of Italy had ever won, the league had been dominated by northern teams like AC Milan, Inter, Roma and Juventus.

The streets of Napoli erupted, murals were painted, mock funerals were held for AC Milan and Juventus and 9-months later a whole host of little Diego's were named in Maradona's honour.

The club were runners up for the next two seasons before regaining the title in 1989/90, also winning the UEFA Cup in 1989.

In short, Maradona transformed Napoli, he lifted a club and a city. The effects of his time there are still rippling today, as evidenced by the outpouring of grief in the form of a celebration of his life when news of his death broke. 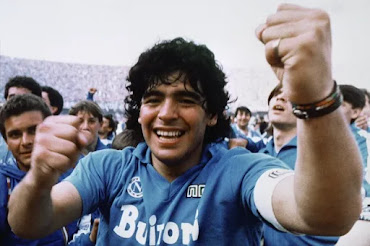 Maradona was struggled through the 1990 World Cup with an injury, but he still captained his country to another final, his will to win almost as important as his skills.

Maradona's career and life was eccentric and erratic post 1990. It had been for a while, but his talent and achievements masked what was going on off the field. He seemed hell bent on destruction, determined to live life at 100 mph. A couple of years ago a video of Maradona out his tree dancing with his eyes shut ended up becoming a Facebook account - the same video every day over dubbed with all kinds of songs. It was briefly amusing yet it became painfully sad, too much of his life became sad. You just wanted to see him fit and healthy, using his influence and skills within the game.

Depending on what you are using to read this blog (phone /tablet/laptop) here are a couple films that highlight the genius of Maradona. There are many more on YouTube

Maradona is a great footballer in the world

Michelle Suzanne Dockery is an English actress. She is most popular for her driving exhibition as Lady Mary Crawley in the ITV TV period show arrangement Downton Abbey (2010–2015), for which she was assigned for a Golden Globe Award and three back-to-back Primetime Emmy Awards for Outstanding Lead Actress in a Drama Series. Dockery was conceived at Rush Green Hospital in Rush Green, East London. She is the little girl of Lorraine and Michael Dockery.

He was brought into the world in 1985 in the United Kingdom, the child of entertainer Lucy Appleby (A Stitch in Time - 1963) and Timothy Lloyd-Hughes, a long-term senior leader with Deutsche Bank. He has two more youthful siblings, record leader Theo Lloyd-Hughes and entertainer Ben Lloyd-Hughes. Both Henry and Ben acted in Miliband of Brothers. Fred Macpherson, lead vocalist of the band Spector, and previously of Les Incompétents and Ox.Eagle.Lion.Man is his cousin.
Hughes and his family are altogether allies of West London football club Queens Park Rangers.

Matthew Bomer is an American entertainer. He is the beneficiary of gestures of recognition, for example, a Golden Globe Award, a Critics' Choice Television Award, and a Primetime Emmy Award decision. In 2005 Bomer made his film debut in the secretive exciting ride Flightplan, by then in 2007 got assertion with his repetitive part in the NBC TV game-plan Chuck.

Kelly Michelle Stables was brought into the world in St. Louis, Missouri where she performed at The Muny Opera. She graduated cum laude from The University of Missouri, Columbia with a BA in Communications and Theater. After moving to Los Angeles she immediately engaged in theater expressions, acting and arranging in more than 2 dozen plays and melodic creations including The Little Foxes, Brady Bunch: The Musical, Peter Pan at the Thousand Oaks Civic Light Opera, and 7 lead spots in LA's honor winning Storybook Theater. While proceeding to contemplate spontaneous creation at The Groundlings and turning into an organization individual from Theater West, Kelly likewise began landing parts on TV and in film. Her extraordinary voice and modest height have permitted her to take on a wide assortment of vivid characters.

Melanie Zanetti Early life:
Melanie Zanetti was brought into the world in Australia. Subsequently, she holds an Australian character. The rising entertainer has not shared anything about her kin through online media paying little mind to how she is dynamic on her Instagram. The entertainer generally shares her photos on her profile which makes us incapable to close anything about her family. She is likewise striking for her lead appearance as Mum in the 2018 TV show, Bluey.

Kyle M. Chandler is an American entertainer who was brought into the world dressed in Buffalo, New York in 1965. He lives in the United States with his significant other, Kathryn Chandler, and their two youngsters, Sawyer and Sydney. A portion of his most remarkable credits incorporates "Friday Night Lights" (Friday Night Lights, "Bloodline", The Wolf of Wall Street, Argo, and Zero Dark Thirty, to give some examples. Starting at 2017 has showed up in four movies that were named for the Best Picture Oscar: Argo, Zero Dark Thirty, The Wolf of Wall Street, and Manchester by the Sea. Argo won in the classification


Joe Buck is an American sportscaster who has a total assets of $15 million. Joe Buck was conceived April 25, 1969, in St. Petersburg, Florida. He is the child of unbelievable sportscaster Jack Buck. Joe Buck has been the beneficiary of various Sports Emmy Awards for his work with Fox Sports, including his parts as lead in depth broadcaster for the organization's National Football League and Major League Baseball inclusion. Joe started his telecom vocation in 1989 while he was an undergrad at Indiana University.

The beginning stage of Amita in Nepal. She appeared on the scene on nineteenth July 1997. Her present age is 23 years of age. There are not a lot of subtleties of her family and gatekeepers open. The zodiac indication of Amita is Cancer. She perseveres through cardiovascular disappointment; a senior sister. Amita nearby her family moved to Brighton. Amita was just seven years of age during that time. The character of Amita is Nepalese. Her nationality is Nepali.

Tarik Skubal is an American expert baseball player who plays as a pitcher for Detroit Tigers in the Major League Baseball (MLB). He misuses the boon to bat through his correct side and likes to toss from his left side. He has held an expert record of 1 win and 4 disasters in his MLB calling and has 37 strikeouts to his name. As of the year 2020, he has held a gotten run common record of 5.63 hustles in his possession. The year 2020 was the showtime of his lord calling, and he has been playing for the Detroit Tigers beginning there forward.