Cover of the month #28   Sonic Youth cover The Carpenters 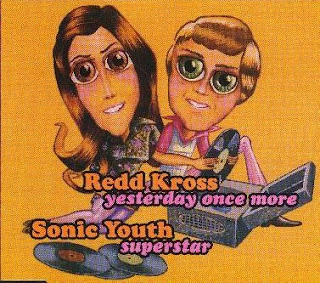 Superstar and Yesterday Once More are songs I discovered when a split single by Sonic Youth and Redd Kross was released back in 1994, taken from The Carpenters tribute album If I Were A Carpenter.

Superstar is yet another cover of the month where I found that the original version of the song wasn't recorded by who I thought it was. The original version was released as Groupie (Superstar) by Delaney and Bonnie and I had never heard their version until I started researching and writing this blog.


The original title gives a lot away. This is a love song from a groupie to a superstar and it is pretty heartbreaking. She has been used, told that it was love, promised he would be back and reality and loneliness are kicking in. It is a beautifully written and performed song with gorgeous vocals. The chorus soars with great harmonies and horns kicking in.


Your guitar, it sounds so sweet and clear
But you're not really here, it's just the radio

The Carpenters version still has a soaring chorus, but you feel the heartbreak so much more, especially on the kiss off line; I love you, I really do. The strings that follow also bring a real sombre mood leading into Karen singing loneliness is such a sad affair.

It's beautiful, it is stunning and it is heartbreaking. There seems to be an extra oomph behind the second chorus and it is immediately repeated


On to Sonic Youth with Thurston Moore really sounding heartbroken. There is an effect on his voice that makes it sound a little psychedelic and the feedback used in the instrumental between the first chorus and the second verse definitely stamps Sonic Youth's mark on the song.

They (rightly) don't rip the song up and try to do anything outrageous, which, being Sonic Youth in 1994, is probably something you would have expected. They respect the song and it is interesting to hear it sung by a male - more of a fan boy than a groupie?

I'm going to include a second cover version of the month seeing as I discovered both of them at the same time. The Carpenters Yesterday Once More is a beautiful song, but it's a bit more MOR than Superstar. Karen Carpenter still pulls on the heart strings, but (at least for me) it doesn't have the raw feeling that Superstar delivers, it's a bit too clean cut. Even the live version below is just a bit too contained/restrained - if you get my meaning.

Redd Kross do a kind of punky karaoke version and just about get away with it. They also remain pretty faithful to the original and scuzz and fuzz it up a little, adding a little rawness to the mix.

So Sonic Youth win this duel of Carpenters cover version for me. They really get into the song, they become part of it. For a full list of artists that featured on If I Were A Carpenter CLICK HERE