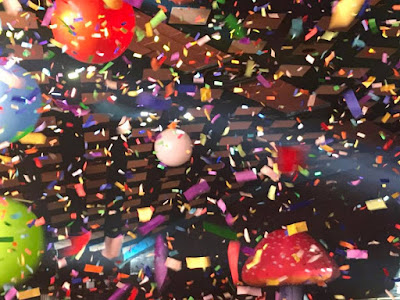 Ah the Barrowland roar, I don't hear it as often as I once did as corporate venues like the Academy and the ABC have infiltrated the Glasgow gig scene. The ABC isn't a bad venue....but the Academy is a soulless, shi**hole of a venue on the southern side of Glasgow that I only venture to when absolutely necessary. The fact that I haven't bought a ticket for The Charlatans, one of my all-time fave bands, in December speaks volumes. I hate the Academy, any band that books it over the Barrowland has a soulless or greedy booking agent.....or one that has never experienced the best venue in the world. Mix that with the best crowd and you have something unique.

Of course bands need to make money, but I think of the bands that have broken through over the last decade or so that haven't experienced the Barrowland Ballroom.... it is their loss.

On to Tuesday 15th August 2017, an incredible 13-years since The Flaming Lips had last played our fair city. Oh how they made up for lost time.

Opening with Race For The Prize in a blaze of technicolour glory, confetti cannons, lights and smoke, they poured their heart and soul into song and performance and they were matched by the crowd. 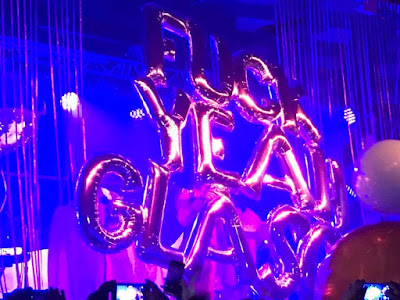 Yoshimi was next, singer Wayne Coyne stretched for the high notes, willed on by the Barras crowd who were behind him from the off. This 56-year old was riding a unicorn round the legendary ballroom by the third song in, his lysergic pop and vision for a show was being lapped up, audience and band were one.

There is nothing like a Barrowland roar. Any band lucky enough to experience it will never forget it, there were several tonight and The Flaming Lips were quick to acknowledge it, stating that this would go down as a legendary show. 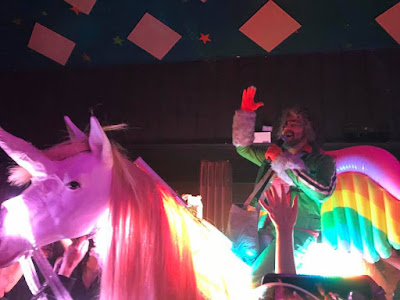 There were plenty of reasons for the Glasgow crowd to be responding in voice; Coyne is a frontman who wears his heart on his sleeve and songs from the seminal Soft Bulletin and Yoshimi albums have melted hearts worldwide. Throw in acidic pop like the Yeah Yeah Yeah Song and new song How? amongst others with a light and stage show like no other then you had something truly remarkable and special taking place on a Tuesday night in Glasgow. This was no show, it was a happening, a celebration; punk, pop, acid....these freaks were out to party.

Their cover of Bowie's Space Oddity was one of many highlights with Coyne encased in an inflatable bubble for the start of the song before climbing out over the audience to a small stage in the middle. It was memorable and euphoric. The crowd were already on Coyne's side, now they were ready to go to war. 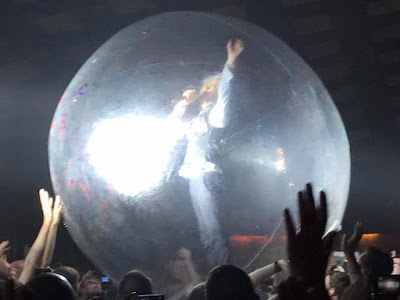 A Spoonful Weighs A Ton was nothing less than mesmerising but the encore was something else. A piano rendition of personal fave Waitin' For A Superman was heart wrenching but the closer of Do You Realize? brought tears to many eyes as people hugged friends and punched the air in life affirming delight.

What a special f**ked up band. You don't get 'em like that these days. 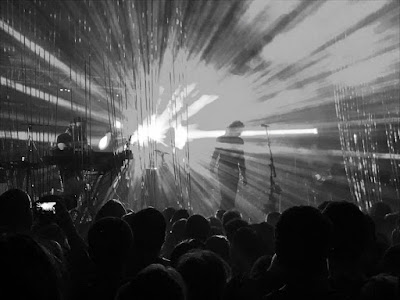 Nice review but.... Flips played Glasgow in 2009 although you may have missed it as it was at the Academy. The show on Tuesday was excellent but not one of their best. The stage at Barrowland is too small for their show. And Wayne does tend to tell most of his audiences that they were legendary. Still the best gig I've seen this year but it could have been better at a different venue.... maybe the Academy?

Great review. Was at the gig near the front and have never experienced anything like it at the many gigs I've attended. Was an absolutely magical night. Rainbows, unicorns, Bowie, bubbles, balloons, confetti and a great crowd. I totally lost myself in the surreal party atmosphere. Every band should play the Barrowlands!