In October 2016 Last Night From Glasgow received a lovely Facebook message from a girl called Amanda McKeown with a private soundcloud link to an album's worth of demos. Amanda asked if we were seeking any new acts, said they formed in late 2015 and had played a grand total of 3 shows.

The bands name - Sister John - was interesting, their Facebook profile pic (below) looked amazing - a simple click and we were transported into their world - all warm acoustic guitars, spine tingling violin and stunning vocals. We were in. 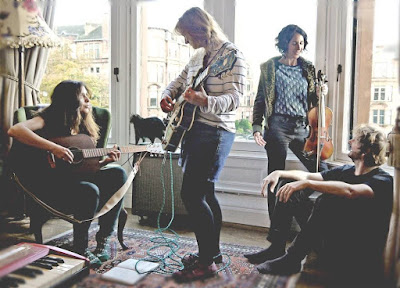 Sister John were introduced to the world at Christmas with their song He Came Down and showcased their taste, style and talent at The Christmas Effect charity show with stunning take on Winter by The Rolling Stones and Christmas Must Be Tonight by The Band.


They are 4 immensely talented musicians and singer/guitarist Amanda McKeown is writing some beautiful songs. Return From Sea, the bands stunning debut album that we were introduced to in demo form last year, will be out on limited edition gatefold vinyl in September. Some of the songs have already been picked up by BBC Radio Scotland.

Expect a review nearer the time, but read on for an interview with Amanda. If you like what you hear and read below then visit the LNFG shop to pre-order.


1. How did the band form?
I've been singing for a while and marinating in music all my life but only started writing a couple of years ago. Warren McIntyre who runs the Seven Song Club at the Tron knew I'd been writing and asked if I would do a set so I asked Jonathan, Sophie and Heather to play with me and we just clicked. They are all incredibly talented players and we have a very sympathetic musical feel between us.

2. How quickly did your find your sound?
I had quite a clear idea of how I wanted the songs to sound - really it was about the minimum needed to convey and enhance the emotion.

3. Am I right in thinking you write all the songs? Do you have a set process or do songs just arrive? The Sweetest Moment sounds so natural, did it just come out like that?
Yes. I write in notebooks a lot. Sometimes I have imagery in my head and I'll connect it to another story - perhaps a film or some experience of my own and whatever it's about will emerge, then I'll play it for the band. Sweetest Moment was written in a morning - I searched for the right first line for a couple of weeks though.


4. Did any music, events or people influence the album?
Writing for me has partly been a process of revealing to myself what is going on with my thoughts, my emotions. The album in retrospect feels like a journey - it couldn't have worked sequenced in any other way. Not to be too grandiose about it but there seems to me to be strong themes in there - navigating in a challenging world, the tangibility of the past in the present, the tension between yourself and society. And from rain to sea to tides and rivers - I didn't realise how much I used water as a metaphor.

5. How important was it to get the album out on vinyl?
I am thrilled about that. It's the perfect format for the sound. 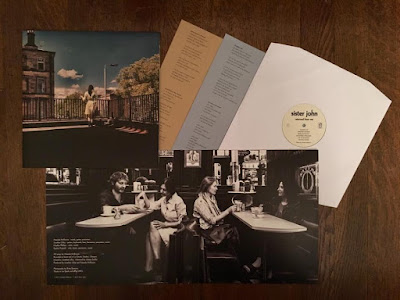 6. You've only played a handful of shows and your 2 launch party shows have sold out. Will you be adding some more soon?
We're really excited about the launch shows and hope to play Edinburgh and one or two other places around Scotland before Christmas - then perhaps back in Glasgow for Celtic Connections, fingers crossed. 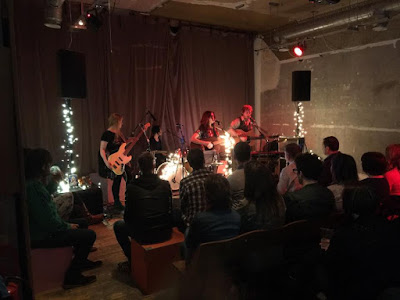 Sister John at the Old Hairdressers

7. Are you writing at present?
I've started writing number two and curious to see where it takes me and our sound.

8. Who/what are you listening to at present? Any other local bands/artists?
I love Stephen Solo - a fellow LNFGer. He writes beautiful songs.