Hearing a 70+ year old Brian Wilson sing and deliver songs he wrote and dreamt of in his early 20's brought a magical and mystical air to Kelvingrove Bandstand last night.

I don't mind admitting that there was a tear in my eye during God Only Knows and hearing lyrics like I know perfectly well you've been patient with me became all the more apt when confronted by a clearly frail and fragile author. Of course we were patient, it is not often that you are in the presence of a genuine genius.

Last night at the Kelvingrove Bandstand was magical....biblical....a religious experience. 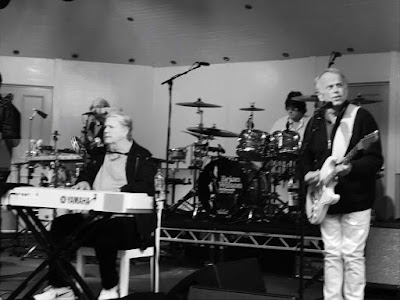 I had the pleasure of witnessing Brian and his band perform twice before. The first was on his comeback tour in 2002/3 when he played Edinburgh Playhouse. Grown men watched in tears and disbelief as their hero seemingly stepped from his sandpit onto the stage to play songs they had only dreamt of previously experiencing live - certainly from their author. The shiver that ran up my spine during Good Vibrations that night will always live with me.

The second time I caught Brian and his band was at the Royal Concert Hall in Glasgow, sitting 3 throws from the front in a central position meant that my wife and I could witness his strengths and weaknesses all to close. Brian could still sing beautifully but he also zoned out at times in mid verse and needed back up to make the songs work.

Last night was magical. The stunning setting of Kelvingrove Park and a passionate Glaswegian crowd helped - of course it did. But hearing Brian sing the majority of Pet Sounds as a 70+ year old brought a whole new meaning to the songs. And his 11 (sometimes 12) piece band were exceptional creating wonderful 9 part harmonies at times. Watching and listening to the layers of the songs being created live was very special in such a setting.

The first half of the show was a mixture of Beach Boys hits, rarities and favourites, commencing with California Girls and taking in classics like Dance, Dance, Dance alongside the likes of I Get Around ensured the crowd were on his side from the off.

Throw in gems like Let The Wind Blow, Feel Flows, Darlin' and Wild Honey then there was plenty of time for the band and audience to warm up. Personal fave Aren't You Glad also got an airing.

Beach Boys founder Al Jardine looked a million times better than Brian, lean, trim and full of beans in comparison to Brian who looked exceptionally overweight and almost incapable of walking on or off stage. His son Matt joined him on stage to sing all the high parts in the setlist and both were exceptional. But I'm not going to go into whether or not Brian should be touring in his state, I am just going to appreciate that he was.

It is worth remembering that Brian didn't take the lead on Beach Boys material in the 60's, leaving that to Carl, Dennis and other members of the band. The trouble is that in 2017 he is front and centre stage and at times this was quite heartbreaking as Brian displayed no emotion sitting behind a keyboard that I doubt was plugged in. There were some songs where he sat motionless as his exceptional band played his timeless songs. But hey, it was a brilliant show. Brian's 11/12 piece band were exceptional, Al and Matt Jardine were faultless on vocals and Blondie Chaplin won the crowd over with his vocals, guitar and tamourine playing and the fact that he looked like a cross between Keith Richards and Yoda!

It was in the second half of the show that things really took off. The band and Brian were suitably warmed up and darkness was falling as they begun Pet Sounds. It really was a delight, they played and sung beautifully.

As mentioned, Brian sang most of the songs and it just brought a whole new meaning to them. They are soulful, timeless and life affirming. The reaction to Sloop John B and God Only Knows was incredible. Brian's voice was stronger on songs like Darlin', God Only Knows and through the encore.

The additional encore was one of the best moments in my gig going history as the Bandstand rose to acclaim a genius and to dance and sing to Good Vibrations, Help Me Rhonda, Barbara Anne, Fun Fun Fun, Surfin' USA before Wilson ended with a beautiful and poignant Love and Mercy.

Was this his last show in Scotland/Glasgow? Many believed that it was. Well it was beautiful, soulful and life affirming, just as Pet Sounds was in 1966, just as it is in 2017.

Thank you Brian, thank you for the music. 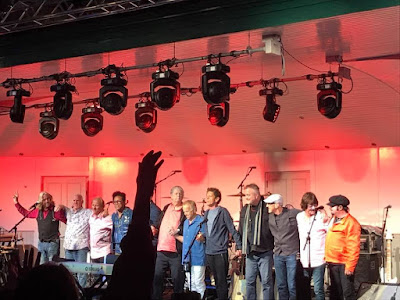 Great, detailed review of what sounds like a really terrific show. I am as jealous as hell.

I have seen Brian countless times since 2000. Yet, reading your review, I still wish I had been at the Kelvingrove Bandstand. Your thoughts on Mr. Wilson, both good and bad, ring true. When it comes to the imperfections, with me, he gets a complete pass. Just happy he's still with us. It helps when you have a band that good too. In fact, more than once, I have left a show thinking the two instrumentals from Pet Sounds were the highlights. As you know, at those points, Brian is merely a spectator.