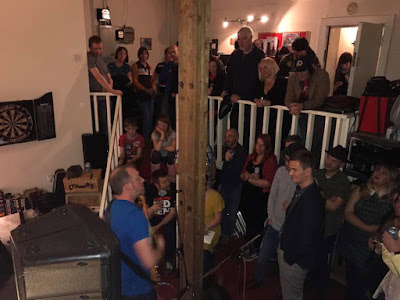 I wasn't intending to write a blog on Stephen Solo's album launch party at La Chunky Studio in the Hidden Lane. I had already waxed lyrically about Pii 2 in my previous blog. However, there was a special magic in the air of Finnieston last night and I wanted to try and capture in a blog.

The venue helped - turning off the West End of Argyle Street down a cobbled lane that leads to all kinds of independent and arty studios and offices, you go to the far left top corner and come across La Chunky Studio.

Owner Ronan Breslin has a long association with Stephen and has also worked with a number of other LNFG artists. Pii 2 is a rather unique album, so we wanted to launch it in a rather unique place, Ronan was the perfect host, La Chunky the perfect setting.

You enter through the studio control room, a huge vintage desk dominates the right hand side, a sofa, old equipment and memorabilia are on the other side. The walls are decorated with releases from all kinds of Scottish bands and artists that have worked there.

You then enter the live room, which doubled as the ticket office, cloakroom and bar (through a raffle system) and hang out area. But the coolest part of La Chunky is probably the huge back room over 2 levels. Ronan and his team had cleared amps and equipment to allow for a 50 capacity venue. So we had people sitting on stairs, watching from 2 'balconies' and people literally in front of Stephen. Old retro lamps were the stage lights, there was a nice homely and relaxed feel. 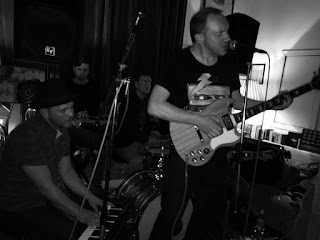 There was a mood for celebration - Stephen and LNFG had an album out - and Craig, a great friend and former band-mate of Stephen's had become a father earlier in the week.

The stage was set for a small band.....but Stephen Solo entered alone and proceeded to weave his magic over the crowd with his wonderful songs that he has recorded over the last few years.

Internet Song has been in my head all day, Freak sounded sublime, Secrets That You Keep is utterly gorgeous, Broken Record sounded insanely brilliant and made so much sense when played live. Crying Because melted hearts and Solo's between song banter ranged from In The Night Garden, to lack of sleep, to the break up of his aforementioned band and the death of David Bowie and Bruce Forsyth. 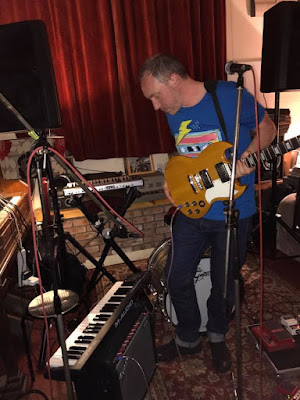 It was a mesmerising solo performance with Stephen's voice rising and soaring with ease or dropping and falling - it won hearts. Impressive.

Solo then announced that his former band (Sonny Marvello) would be joining him for the second half of the show, so there was time to buy some more raffle tickets to win some more beer. 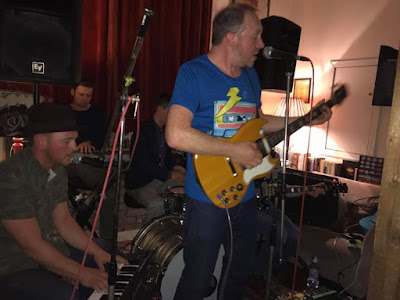 Sonny Marvello were Stephen, Mick (guitar), Craig (bass), Walker (keys) and Bryans (drums). You'll find their music on Spotify and iTunes and plenty about them in previous blogs down the years.

Last night they came together to help their friend create some of the magical songs he has created on his iPhone in a live environment. What a great job they did!

Think Strange was all lush and warm, LocoCoco was full of melodies and invention while No Pill For What I've Got was just jaw droopingly good. What a song, what a performance! It was great to hear the songs played by a band.

The band ended (at request) by rolling out an old Sonny Marvello song - unrehearsed - Fire Went Out is a real fave of mine and the closing section was truly spine tingling. It was great to see and hear the 5 friends playing together again - magical.

A special show in a special venue by a special talent.