Do you fancy discovering a band full of melodies, hook, humour, invention and a touch of psychedelia who sometimes record on an old Tascam Cassette Recorder? A band that are still evolving and haven't even played a handful of shows yet but have an EP coming out?

A band who describe themselves on Facebook as wonky pop, looney tunes and merry melodies, all swimming in nutty effects with a rich Beatleish undercurrent, clattering along like Supergrass doing Badfinger by way of an XTC Bond theme, all compressed vocals, ringing and lightly toasted guitars, stop/start riffs and a brilliant rhythm section. Extradordinary - slightly psychedelic and Super Furry super-tuneful! 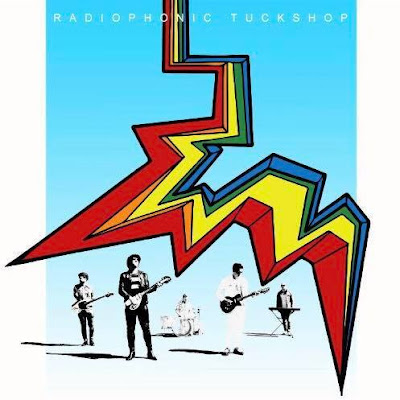 Well look no further than Radiophonic Tuckshop, the new band formed by Joe Kane, the effervescent fizzbomb who has been in (and still is in) a number of other bands including my personal favourite Dr Cosmos Tape Lab. If you haven't read any of my previous blogs on them then check them out HERE Their Beyond The Silver Sea LP was my album of 2015.

Joe has recently contributed to the latest BMX Bandits album that you can read about in last months blogs, produced the Ette Homemade Lemonade album (and played on it and co-wrote the brilliant Heaven Knows) and still travels the world playing in Beatles tribute bands, including the famous Them Beatles - not a bad way to make a living and one that indicates his talent.

That talent has transferred to his recent project - Radiophonic Tuckshop who I caught at Nice n Sleazys back in April when they supported TeenCanteen. They played brilliantly and sounded superb and from a chat with Joe it all sounded very spontaneous and exciting - so I thought I would email him some questions to find out more.

You can read the interview below and look out for their debut EP coming out via Last Night From Glasgow in July with a launch show at the Hug and Pint. Excuse the cut and paste format, something went wrong when copying Joe's answers - hope you think it looks cool! 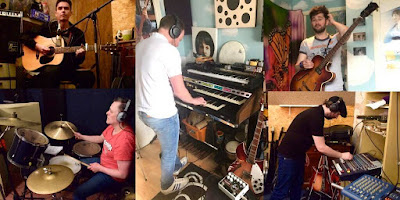 1. How did the Radiophonic Tuck Shop form?

I'd been toying with the idea of a new project for the best part of last year but wasn't keen on making it the ONLY JOE KANE solo ego-fest type thing again. I fancied more of a fake band ethos and Radiophonic Tuckshop was one of the names I had floating around that I was quite keen on. I started working on new songs and recordings at the end of last summer but was getting a bit fed up with me playing everything. It can get a bit hard to surprise yourself musically doing all the instruments.

The guys from Freckfest contacted me around March and asked if I fancied supporting BMX Bandits which I thought sounded fun but I didn't have a band and told them to leave it with me. I contacted a bunch of my longtime friends (who mostly happen to be musical) and luckily found a bands worth that were free and up for it. Sessions were easygoing and within 2-weeks we had a set. Everyone didn't hate it and seemed quite keen to carry on past the initial gig. Quite good!

2. Does this mean the end of Dr Cosmos Tape Lab, or is that a project you might return to in the future?

We're very together and in constant contact but just a bit busy with other things. I got a bit busy with being away for a long spell (or two) so we lost momentum but we have a full LP in the can awaiting release and we will record again in the near future. Side 2 is one long song suite/ghost story entitled Dead Man's Pyjamas and it's the best thing we've ever created. We recorded 4 albums plus a bunch of b-sides in two years so everyone deserves a rest!

3. You've got an EP coming out - tell us about the sounds and the songs on it

We knew we were going to do an album but had fresh arrangements of some older songs of mine that I thought had fallen by the wayside in the past so we decided to do them as their own little thing. The new live versions were all improvements so it seemed like a good idea to get them down. We decided to record the band live to the Tascam 424 mkiii 4-track cassette recorder (last used on Beyond The Silver Sea) at the room we rehearse in (Ian our drummers magical 'Bunker'). It took us one evening to record all of the backing tracks then another few weeks of drop in overdub sessions for vocals etc.

Running Commentary is the most obvious poppy one and in a previous life it was a less rocking more ornate arrangement that didn't work quite as well. It's more power-pop now and it suits it. We had fun on the video (coming soon) wearing silly trousers and taking over a street for an afternoon.

Buried Alive is the oldest song on the EP and has never been released in any form. It originated around 2004 and existed only a a skeletal late night demo for a long time but I always enjoyed its spookiness and thought it had a bit of potential.

Rockingham Palace Revisited started out as a drone jam which I banked thinking later on it could be reversed and used as the basis for something and that's exactly what I did. I sat up until 5am the other week recording bird song out of the window and harmonising with myself through a pedal basically trying (and failing) to do Dennis Wilson. Bring It On Girl was recorded (with Marco Rea) a few years ago for a Shindig magazine cover CD that never actually happened so I suppose it's never been released. This new version was fun to do with the whole band. It's about accidentally getting married and trying to escape an island of misery (true story). My favourite one is maybe As Hard As I Feel which is a song that doesn't make much sense really but is more of a feel and sound piece (!) than a standard song. It's like 3 and a half minutes inside my head. I can see us going down more of this route sonically than the standard guitar pop direction in the future.

4. Do you have future plans for the band? Things have happened quite quickly to date

We are now officially in album writing and recording mode. It's very exciting and I think it will be a real mix of sounds. We have the full band to play with but I also like the idea of more electronic sessions and bringing in additional instrumentation. I feel like I've made variations of the same weird pop record for the last 15-years and want to push myself production wise and experiment a bit. 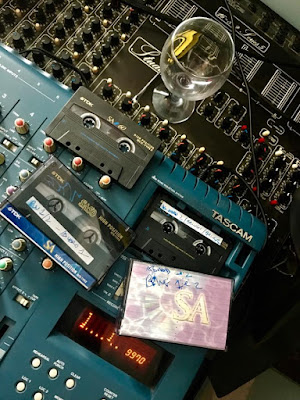 5. What kind of stuff are you listening to at the moment?

I enjoy lounge and exotica stuff, late 70's and early 80's groove stuff, especially the extended 12-inch versions of things. I love a lot of the Bollywood stuff from the 70's too and I think arrangement wise there's a lot of stuff I'd like to draw on from those genres. I obviously listen to all the usual good stuff as well and will probably f**k off all these exciting ideas and just re-write another 12 Beatles and Beach Boys songs. That's OK too!

6. You are well known for your love of The Beatles - what do you make of the Sgt Pepper 'makeover'?

It's mostly a worthwhile endeavour but there's a few things I wasn't so sure about, like panning the lowery organ part of Lucy In The Sky With Diamonds. What was all that about? When it becomes someone who has nothing to do with the original music creation and production taking liberties like that then I think they need to have a word with themselves. The 2 bonus CD's of outtakes is where it's at for me.

7. Do you have a favourite Beatles album? Is it possible to choose just one?

I love different albums for different reasons! Love them all. White Album has probably been the most influential though as it was a favourite for a long time as it made it OK to put out a whole bunch of wildly varied stuff on an LP. It's like a catalogue of brilliant production sounds.

8. How do you write your own songs?

When I write songs I either start on a piano, guitar, ukulele or even a Casiotone and just feel about to see if anything's there. Usually not. Sometimes things can write themselves quite quickly or you just get a wee bit that you can bank for later. I'll hear a section in my head when I'm out occasionally and just whistle it on to my phone and pick it up when I get home. That's quite good. A lot of the time I just start working on a piece of music for fun and the song comes over it later and it ends up the finished thing. It's good to not have one way of doing things and to try out different methods from time to time.

9. Is there anyone you would like to write with?

Always Stu Kidd. We always come up with something. That will happen again. Same with Nic Denholm my old writing partner from The Owsley Sunshine. We always come up with something even though he is in LA now. Duglas and Marco I'm also a fan of and enjoy working with them too so more of that would be good. Aside from people I've worked with before though I'd love to write with the Radiophonic Tuckshop guys. There's a lot of scope there and I hope they all contribute to new material and it's not just my hackneyed old ideas! I really enjoy collaboration and I'll write with anyone if it's fun and fruitful. It usually is.

10. What can we expect from your live shows?

Silly trousers and weird loud pop songs. We want to become a bit electronic so we'll gradually ass new songs and instruments. We'd like to do more festivals and have our own dancing troupe. It might happen. We're having fun creating and we hope we can entertain people with it. If no-one likes it and we still have fun that's the main thing.

Radiophonic Tuckshop play the Hug and Pint on 30th July to celebrate the release of their Running Commentary EP via Last Night From Glasgow on 28th July. Tickets and ltd edition physical EP HERE 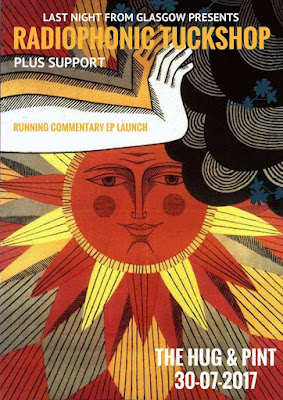