Don't Let Me Down has been my favourite Beatles song for a long time now. Probably since my late teens or early 20's. There are many, many others I love - Got To Get You Into My Life, Tomorrow Never Knows, I Saw Her Standing There, Something, Here Comes The Sun, Strawberry Fields Forever, I'll Follow The Sun, Two Of Us......

However, at least for today, I thought I would write why Don't Let Me Down is my particular favourite. 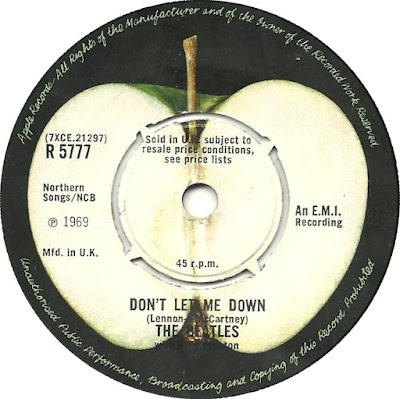 In a nutshell, it is the bluesy, soulful rawness that is evident from Lennon's count-in (on this version) that brings in Billy Preston on organ, beautiful guitar by Harrison and Lennon's rich voice. McCartney and Starr lock in to a groove and create a solid platform for the others.

Lennon is so head over heels in love with Yoko Ono that he had to say it in 4 words rather than the usual 3. Lennon lays himself bare, committing himself completely and urging (pleading with) Ono not let him down. It is soulful, powerful and emotional. Lennon leaves the listener with no doubt.

The middle eight is possibly my all-time favourite, Lennon really goes for it and I love the melody and flow.

Don't let me down

This is my favourite Lennon vocal performance and he is singing a love song like no other - he sings to Yoko in the choruses and his friends and the world in the verses, telling his tale, so good he had to tell someone.


By the last choruses Lennon is shouting 'hey' and 'whooping' as he really goes for it, his vocals are raspy and raw, Billy Preston plays some exquisite organ and just listen to Macca's bass.

The rooftop version (above) is my favourite; The Beatles last stand. They look fantastic - Lennon with his classic long hair, middle parting, side burns, round granny glasses and fur coat; McCartney in black suit, shirt and brown shoes complete with beard; George somehow making green jeans, converse and a fur coat look the coolest outfit going, Ringo looks a little cold and stoned in his red mac.

There are smiles - look at the way they all look at each other at times. They not only look fantastic, they sound AMAZING. If I ever get my hands on a delorean, some plutonium (or the knowledge of where and when a bolt of lightning would strike) and a flex capacitor - then I would head back for this show rather than the Cavern Club, Shea Stadium or Hamburg.

It's a tantalising glimpse of how good they still were - despite the differences between them at this stage. 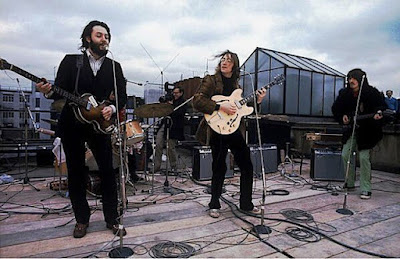