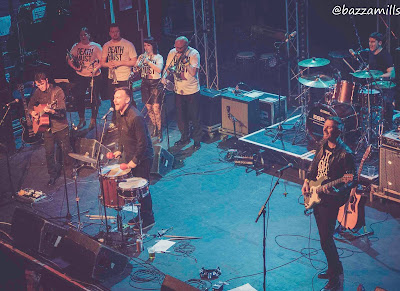 I first heard of the band named Dead Man Fall a few years ago when they somehow managed to get their song Bang Your Drum involved in a big way on the Craig Ferguson Show in America. The results (noted in the interview below) were nothing short of staggering for a young unsigned/DIY band from Scotland.

That success is only part of their story. Like every band or artist I am friends with or have spoken to; there are challenges, frustrations and thankfully moments where you are reminded why you do it.

Despite hearing about them back in 2014 I never managed to see them live until May when they supported their friends Colonel Mustard and the Dijon 5 at their Academy show. I was thoroughly impressed and said as much in blog review.

I dug deeper and what I have heard mixes a celtic melancholy with euphoria, heart and soul with hope  and dreams. They are impressive. I should have checked them before now!

The band have released a string of singles over the last few years, check this Spotify playlist;


I got in touch with the band to find out more about their history, what makes them tick and to find out what else they have planned ahead of their headline show at the wonderful St Lukes in Glasgow on Saturday 5th August. TICKETS HERE

Check their most recent video below for What's The Point which, for me, mixes Doves with Hot Chip.

1. How did Dead Man Fall form? Where and when?
DES: I intially started DMF in my own bedroom in Cumbernauld. I was drumming in another band called Odeon Beatclub and was writing tunes in the background. Once that all came to an end in 2013 I started pushing forward with the songs on my own. I had recorded a few songs to get things going then gradually got the guys involved by letting them hear the recordings and the kind of sound I was pursuing. We all went to school together and had been in many other bands, but never in the same one. The name Dead Man Fall comes from a game we used to play out in the street, sometimes I think it makes us sound a bit darker, almost like a goth or metal band but It's grown into itself.2. Did you have a sound in mind when you formed, songs written?
DES: In the early days the sound was very electronic based. I would program beats, synths and all that then start to put real instruments and vocals over the top of that. It started to go in the way of the bands I had grown up listening to such as Joy Division and New Order as one of my older brothers always blasted that out when we shared a room, combined with the bands I was starting to listen to round that time such as The Rapture and Hot Chip. I had about five songs written before anybody else joined. Nowadays songs come from myself in the same way, but also from jamming as a band in the Studio. That's exactly how Bang Your Drum came about so it's helped to add a different element to our sound. 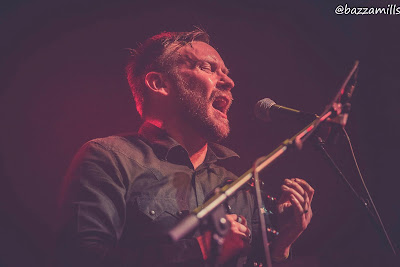 3. You received some incredible exposure in America, how did that come about?
VINNIE: It all started from me sending Craig Ferguson a tweet with our video for Bang Your Drum which I just hoped he would retweet to his 2 million followers.  He then set up his own tweet saying “another great band from Glasgow” which included our video.  Then about 5 minutes laterhe followed us and sent us a DM asking us to come over and play on the Late Late Show. I nearly passed out when that came through.  My hands were shaking when I was trying to phone the guys.  Anyway to cut a long story short we never got the Visa but he then asked if he could use our song for his final episode. We of course said yes.  When we seen how it was used it blew our mind.  He had all these A-List celebrities lip synching to our song and then a live performance in the studio after that with guys like Steve Jones from the Sex Pistols on guitar.  It was mad.  Then about two days later we went to number 1 on the American iTunes Rock Chart, number 1 on US Amazon digital downloads, number 2 in Canada and around number 25 in the uk.  Our social media exploded.

4. Was it frustrating not to be able to get over there afterwards?
VINNIE: Like you wouldn’t believe.  A lot of time and money was wasted to not even get a sniff.  It took up so much of the band’s time so we looked as if we were doing nothing for a while.  We also couldn’t get a Visa this year to go over and play the Firefly Festival in Delaware.  The whole American visa process is a farce.  It’s just a big money making industry in it’s own right.
5. What else have the band achieved to date? What has been your favourite live show to date?DES: A highlight was playing the Tbreak stage at the first time T in The Park headed to Strathallan. I would't say that was my own personal live favourite. We played The Record Factory and King Tuts within about two months of each other, and both of them were rammed, hot and sweaty. It was also the first gigs were we had people singing the lyrics back to the tunes. Our recent support slot with Colonel Mustard at the O2 was a brilliant show although we had a few stressful technical difficulties up on stage. Gareth our Drummer loved that one! Mainly because the audience were great but also he thought it was a buzz wondering what was going to go wrong next....My Bass decided to cut out mid song(s), My acoustic guitar slipped out of tune with new strings the day before. Gareth's bass drum beater also flew off mid song, he had to run and grab another kick pedal and screw it on before the beat was supposed to come back in. He managed to do it though! 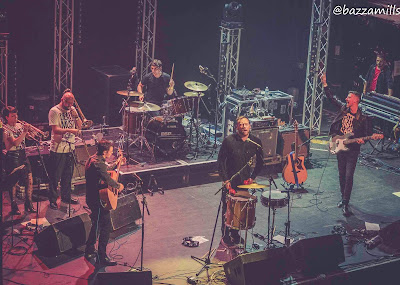 6. What have you been up to most recently?
VINNIE: We’re just back from Amsterdam last weekend after going over to film our video for our next single Andy Warhol.  We filmed it all ourselves and got a lot of good footage.  We were all dressed as Andy Warhol although we could have easily been mistaken for Tim Burgess.  It got a bit messy later on.  I lost my mind then lost my phone.  Luckily most of the footage was on Gareth’s phone.  It was only minimal footage on mine although some of it would’ve been good stuff.  It was a great trip though.  By that I mean the trip to Amsterdam. 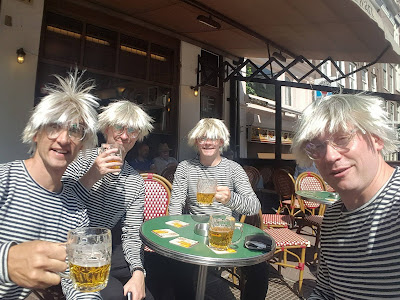 7. What have you got planned?
DES: We really need to hit the festivals next year. We're playing a brand new scottish festival 'Argyll Gathering' down in Helensburgh in August. It's a cracking line up with Colonel Mustard and the Dijon 5, The Lafontaines, Mickey 9's and Bwani Junction playing too. We're also playing a Musicians against Homelessness show in the Drygate in September but after that we're going to be applying for every festival we can. When we play to a new crowd more often than not we really win them over. I would like to think that the set we can blast out is more than deserving and suitable for a number of festival stages.
8. What music are you all listening to at present?
VINNIE:  I’ve become slightly obsessed with Arcade Fire of present.  I had been wanting to see them for years and got to see them at the Corn Exchange only last month.  It blew me away.  Now I’m just watching clips of them on Youtube and stuff like a little teenage girl.  It’s not healthy.  The past few weeks I’ve been jumping between them, LCD Soundsystem, Nick Cave, Radiohead and Coldplay….and I don’t care who knows that, I love them.
Gareth’s just been listening to the song Everything Now by Arcade Fire, Kev has been listening to Suuns.
DES: I probably don't listen to as much new music at the moment. Today I had on AM by the Arctic Monkeys. It's one of the rare albums I never ever skip a song on. The other day I was delving back into The Prodigy reliving the glory days. Sometimes I'll stick on older stuff like Marlena Shaw and Motown stuff, Ain't No Mountain High Enough by Marvin Gaye and Tammi Terrell must be one of my favourite tunes ever. 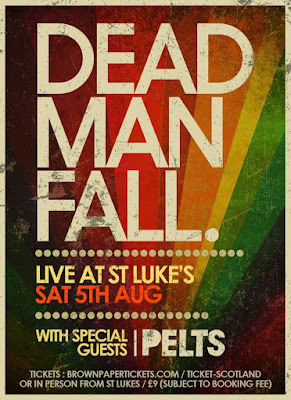