I Heard It Through The Grapevine

Cover version of the month #27

Marvin Gaye, Gladys Knight, Creedence Clearwater Revival and The Slits
cover I Heard It Through The Grapevine 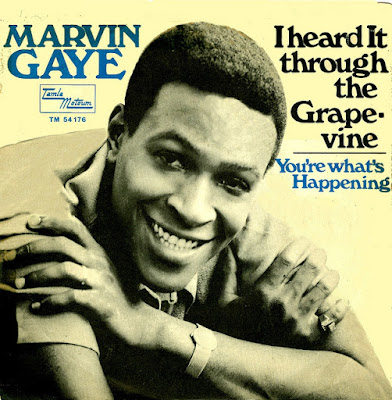 I Heard It Through The Grapevine is one of the most famous and loved songs ever to be released by the legendary Motown Records.

3 of their biggest stars recorded and released the song between September 1967 and October 1968; beginning with Gladys Knight and the Pips. The song became an instant hit, reaching number 2 in the charts and deservedly so.

Everything about the song is exceptional - the story of hearing of a lost love, the groove, the beat, the organ.....

The Gladys Knight and the Pips version has a stunning vocal - Gladys talking directly to her lost love and telling of how she is just about to lose her mind, pleading for him to listen.

The song was originally recorded by Smokey Robinson and the Miracles. Smokey has/had an incredible voice but for me this version doesn't capture the hurt that the song portrays.

The song was then recorded by Marvin Gaye in the Spring of 1967 but wasn't deemed a single so it was sidetracked on to his In The Groove album.

It was only after the Gladys Knight version became a hit that DJ's also began playing the Marvin version on radio, so Motown put it out as a single and it reached number 1.

The Marvin Gaye version is the definitive version. He captures the song in a way that Gladys Knight (who had to change the lyrics ever so slightly) and Smokey Robinson don't. He lives it, or he lived it, you hear it in his voice. It is sensational, rising at all the right moments, hitting notes others can only dream of. Check this incredible a cappella version. His band get the groove and they play it with an edge that the song deserves and demands.

Gaye may have recorded the definitive version, but my own personal favourite is the mind-blowing 11-minutes and 11 seconds version by Creedence Clearwater Revival that I discovered in my teens on their Chronicle Volume 1 (best of) album.

It really did blow my mind; the way the band lock into a groove, John Fogerty has the soulful voice to deliver the song, the guitars and the way they head off on a 8-minute jam that takes the song into previously unexplored territory. Gaye's version ends at 3-minutes and 12 seconds, just as the Creedence version really gets going with an explosive guitar solo.

Fogerty comes back in for a chorus and then the guitar is really unleashed, all the time backed by a rhythm section as tight and funky as they come.

The drums are outstanding throughout - from 5-minutes on they are let loose with the guitar with just the bass and rhythm guitar keeping the groove. I recall hearing this for the first time and then playing it to one of my best friends (remember this Reddy?) to marvel at it together.

Doug Clifford on drums may well deliver my favourite drums ever on this version of a Motown classic. He ups it at 6 minutes and 48 seconds and then just keeps it going, hammering his symbols, making up fills, sounding like he is having the time of his life.

Fogerty joins in and at 8-minutes and 20 seconds he finds a brilliant playful riff and his sensational band keep on going. Fogerty then comes out of that groove and slows it down slightly at 9-minutes and 9 seconds, his band still lost in the magical groove they have found.

The rhythm groove is allowed some breathing space, I like to imagine Fogerty just standing back and enjoying the groove. The song is faded out - how long did it go on for?! Is there a longer recording?!

Many other artists have recorded I Heard It Through The Grapevine. The Slits version, below, captures the song in the heady days of punk and has an explosive raw quality to it.

However it is the Creedence version that grabbed me - and it still does. Hope you enjoy.

A list with links to previous cover versions of the month is noted below.

Labels: best cover version ever., cover version, creedence clearwater revival, Gladys Knight and the Pips, I Heard It Through The Grapevine, marvin gaye, Motown, Smokey Robinson, The Miracles, The Slits