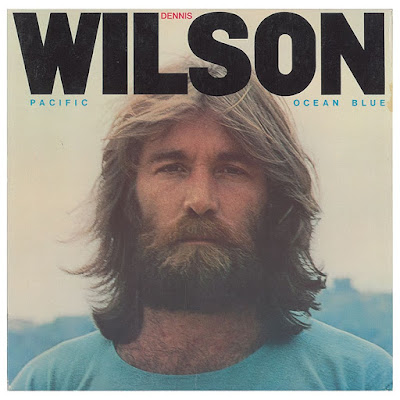 Pacific Ocean Blue is an album that I return to regularly. It is like a fine wine, getting better with every passing year....and I find more in it every year....like it grows with me. (the Spotify link is at the end of this blog).

Wilson's voice is incredible; beautiful, yet hurt and broken at times, rich and raw but also soulful and soothing. The lyrics pull you in, the guy has loved and lost, he still loves and he wants to tell all. River Song and Rainbows are my favourites, just sublime.

Released in 1977, Pacific Ocean Blue was the debut album by Beach Boy Dennis Wilson (indeed his only album as the follow up Bambu was unfinished at the time of his death in 1983).

Two of the best songs from the sessions for the album were unreleased - the stunning Only With You, one of the best love songs you will ever hear - and the beautiful instrumental Holy Man.


One of the best love songs of all time 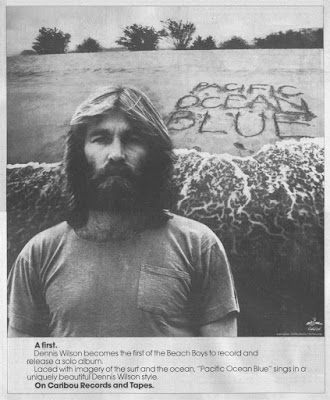 Dennis had written Only With You for The Beach Boys Holland album, but the lead vocals were taken by Carl. The rich rawness of Dennis' vocal on the Pacific Ocean Blue album take it to another level.

Incidentally, this was the song that turned me on to Pacific Ocean Blue. Norman Blake from Teenage Fanclub recorded it for a tribute album Caroline Now - The Songs of Brian Wilson and The Beach Boys. That and I think Bobby Gillespie mentioned the album in an interview.

The opening piano riff to River Song that leads to Dennis backed by a gospel choir sends a spine tingling shiver of joy every time I hear it.

Dennis' voice is throaty, raspy and soulful as he talks of being struggling to breath in the city and longing for the river; this leads to a glorious break before a beautiful middle eight (below) before the faded ending that sounds like it could otherwise have gone on forever with Dennis urging You've got to run away, you've got to run away

It breaks my heart to see the city

River Song is simply stunning, the perfect introduction to Pacific Ocean Blue, but over too soon at 3 minutes 38 seconds. You just have to go back and listen again - it is that good. And just to check Dennis really does pack all those changes and soul into that short space of time?

Pacific Ocean Blue has so much to offer. Wilson has the blues (bad!), losing himself in music and singing of it in songs like Dreamer. Just wait for the break to

Be warned, your heart may ache and break. Moonshine will move you and just wait for the incredible lyric; It was you who said there won't be tomorrow, you said you love me now in another way 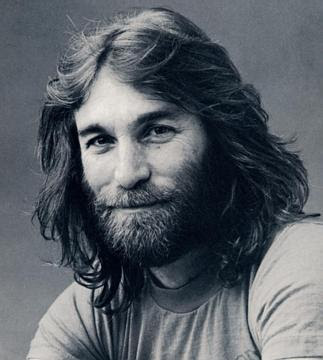 Thoughts Of You will break your heart. Just listen to Wilson's soulful voice straining, breaking and sounding so fragile and true over piano right from the off. The melody is absolutely gorgeous.

The song then takes off on a psychedelic trip before coming back to the original melody and Wilson's incredible vocal.


Loneliness is a very special place
To forget is something that I've never done
Silently, silently you touch my face

Wilson puts his heart out on Time, talking of being the type of guy who messes around before singing I love you, I really do with incredible feeling and soul. His voice is sensational, the break into the hold on takes things to another dimension and it sounds like Wilson is giving himself advice.

Did I mention heart ache and break? Farewell My Friend will rip your heart out. It was the song played at Wilson's funeral following his death at the age of just 39 following years of alcohol and drug abuse that eventually saw Dennis homeless.

Rainbows is one of my favourite songs, all of a sudden Wilson sounds positive and full of love. The surging melody and build to And I want you to know, I love you, I love you so leads into the glorious second verse with the backing vocals just lifting things higher. 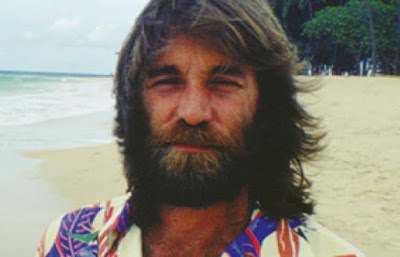 The album finishes with the appropriately named End Of The Show. Just listen to Wilson's voice in the thank you very much section. Pure emotion, pure soul.

Rather incredibly, the album sold less than 5,000 copies upon release in 1977, quickly becoming out of print and a cult album. The 2008 deluxe double edition CD of Pacific Ocean Blue and Dennis' unreleased follow up Bambu shone a light on a remarkable album and that light deserves to shine.

The 3 additional songs added to the Pacific Ocean Blue CD were Tug Of Love, the aforementioned Only With You and the truly stunning instrumental masterpiece Holy Man. Wilson had recorded vocals but deleted them as he felt he couldn't get the melody quite right. The music stands up on its own.

I'll write a blog on Bambu another time, but for now, please dig in and treasure this masterpiece.

A true masterpiece indeed. I also return to this heavy underrated record often. Thanks for the unreleased songs.

Walter just said what I would've.