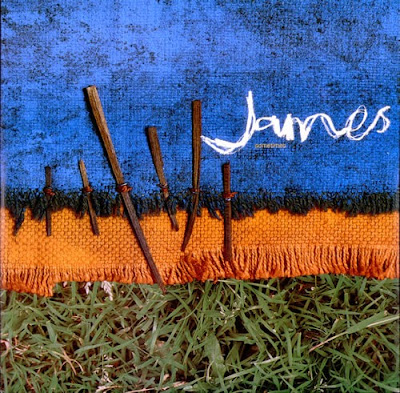 
When Sometimes by James came out I bought it on 12-inch vinyl and on CD. My Mum then heard me playing it and then asked if I could buy her the cassette single for the car. So our household had it on 3 formats.

James were riding high on the back of the Goldmother (1990) and Seven (1992) album, resulting in them being invited to tour with Neil Young. On return they went into the studio with Brian Eno, a producer they had wanted to work with as far back as their debut LP Stutter (1986).

The partnership worked, resulting in not only the Laid (1993) album, but also the double album Wah Wah (1994) that came from free form jams with Tim Booth adding vocals later on.

Sometimes is such a beautiful song. For me it captures the band and Booth jamming; free flowing lyrics over a driving and somewhat ferocious acoustic guitar lead to a head over heels romantic chorus.

The song allows a 7-piece band like James to open up and go with the flow, and oh how they go with the flow. Check these incredible live videos, firstly BBC footage from Glastonbury and secondly fan footage from a concert in Athen where the crowd just keep singing the chorus, Tim Booth join in, then he starts dancing and the band come in with some synth and it turns into a little rave for one glorious minute. Spine tingling.

Read on for the full lyrics and links to other songs in the Trust Me series.

The rain floods gutters
And makes a great sound on concrete
On a flat roof, there's a boy
Leaning against a wall of rain
Aerial held high
Calling come on thunder
Come on thunder

It's a monsoon
And the rain lifts lids off cars
Spinning buses like toys
Stripping them to chrome
Across the bay, the waves are turning into something else
Picking up fishing boats and spewing them on the shore


Then he crumples
Drops into the gutter
Cut strings
Legs twitching


There's four new colours in the rainbow
An old man's taking polaroids
But all he catches
Is endless rain, endless rain

1. Something On Your Mind by Karen Dalton
1A. Crimson and Clover by Tommy James and the Shondells
2. I Am, I Said  by Neil Diamond
3. Where's The Playground Susie?   by Glen Campbell
4. If You Could Read My Mind by Gordon Lighfoot
5. Gimme Some Truth by John Lennon
6. Gone With The Wind Is My Love by Rita and the Tiaras
7. In The Year 2525 by Zager and Evans
8. The Music Box by Ruth Copeland
9. The Ship Song by Nick Cave
Posted by everythingflows at 09:08