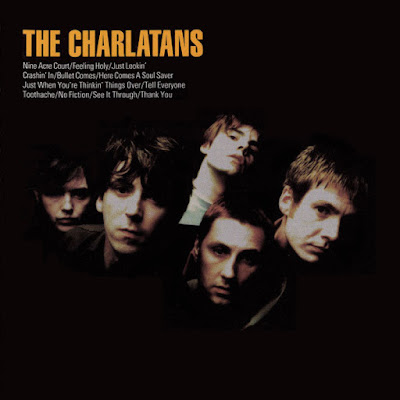 I've reminisced about the blisteringly hot summer of 1995 on a few occasions over the last month or two.
T in the Park absolutely baked and I remember a dust storm when Black Grape and The Charlatans played the main stage. There was a lot of excellent music around to soundtrack the time and later that month The Charlatans would release their eponymous album.

The band had barely paused for breath, the LP was released only 17-months after Up To Our Hips and with the run of singles off both albums, it seemed pretty seamless. That is something The Charlatans have always had, particularly through the glorious 90's - consistency. Quality and quantity.
The Charlatans was originally going to be called The First Shag In Ages! Which would of course have been an excellent title, but on reflection, the eponymous title is a definitely more classy!
Lets revisit the album, a melting pot of songs, grooves & jams. The Charlatans have always had a lovely sense of looseness about their work, but on this album in particular, it's showcased in a beautifully raw way, more so than anything before or since.

Nine Acre Court opens the album and there is a groove and urgency to the track that the band really had in 1995. I always remember the band opening their Knebworth set with this song. Emotions were running high on stage and off.

They take it up a notch with Feelin' Holy. Tim Burgess lays the band's drug intake bare in his Tellin' Stories autobiography and there is no doubt what he is on about here. The band gel superbly on this LP, there is a raw live feel to much of the album and a sense of energy, purpose & belief.

One drop, can make you feel how I love

One sweet buzz, can make you feel how I feel 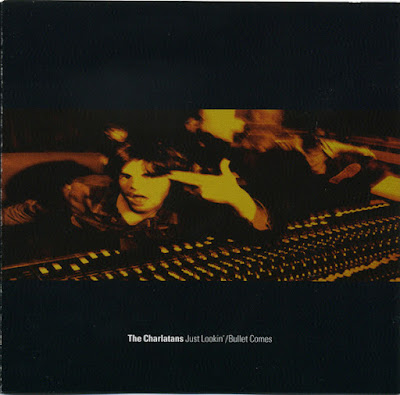 Just Lookin' has a super cool vibe to it, the band know they are on form - you can feel it and you can see it in the video and footage from their appearance on Later with Jools. It's super loose, the band are locked in a groove and Burgess sounds fantastic. I love when the beat cuts out allowing him to sing;
I bet you talk about freedom
Then throw it to the sea
You better smile on for my sweet dreamer
You'll never shake it away from me
The closing 45-seconds capture The Charlatans at their best, Jon Brookes gives things an added kick, Mark Collins is in the zone - lovely! 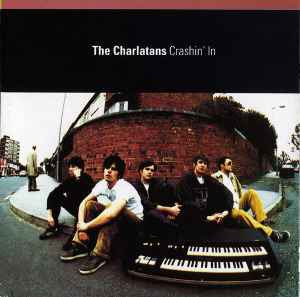 Crashin' In is simply sublime. The sound of a band smashing it. This is one of my all time favourite Charlatans songs and my favourite ever TV performance by the band was them tearing through it on The White Room. Just look at Tim looking on in admiration at his band and Jon Brookes on drums in particular. They are on fire. Did I mention Mark Collins being in the zone? He's all over this album, guitars pushed to the fore.
Crashin' In official video
Crashin' In on the White Room

Then the classic Charlatans hammond sound takes over for Bullet Comes, the beats are heavy, Burgess starts with a whisper, building to ask what you gonna do when the bullet comes round? And then giving the advice to live it like you love it
It's a great groove. When I look back to this era and this year, The Charlatans were capturing a loose live sound on record like no other band at the time. At 3 minutes 28 seconds you can hear Burgess mumbling something, which makes me think this was captured live. The last 90-seconds are the sound of the band lost in music and Burgess urging live it like you love it.
Talking of grooves, Here Comes a Soul Saver rides in on one, Burgess sounds sweet, the organ is just sublime, everything gels beautifully for the instrumental and then Tim comes back in it's the sunshine of your life, can you feel it when it's right?
A real favourite. Check this live performance from the Phoenix Festival in 1997. 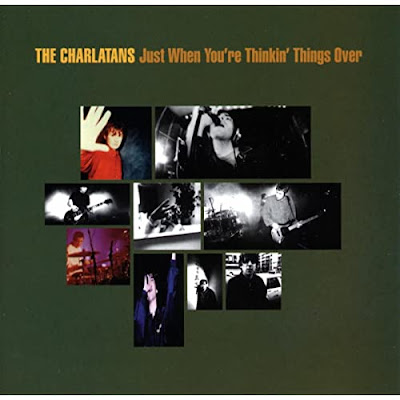 The loose Stones-y sunshine vibe of Just When You're Thinkin' Things Over sounds just as fresh today as it did back in 1995. You look good when you're heart is on fire, it's a matter of taste yeah! is one of my favourite Charlatans lyrics. There is plenty of time over the 5-minutes for the band to groove, the first instrumental starts quite slow and then builds with Mark Collins really fizzing on guitar, building it up and then letting it fall back into the shuffling Stones-y riff & rhythm. The last minute is the band in full flight.
Official video
From Stones-y to stoned. Tell Everyone has a lush, dreamy, slow & stoned feel to it. Toothache is a dirty, loose n raw jam with such a menacing groove that it attracted a remix by The Chemical Brothers, who released their debut album Exit Planet Dust in that glorious summer of 1995. Then we're into No Fiction, The Charlatans are totally on it.
A sense of escapism comes across on See It Through, it takes a while to get going, and then there is a flowing vocal  melody underpinned by Rob Collins on hammond.
I want to free all the monkeys
Don't want to live in the zoo
Thank You closes the album, a funky psychedelic instrumental, save for Burgess saying a few words, beginning by saying thank you, as if talking to fans.
I've really enjoyed revisiting the album and hope you do too.
A great little documentary came out on the band via Granada as they were recording the album. Check it out below.

Labels: 20th anniversary, album, blog, documentary, eponymous, live, review, T in the Park 1995, the charlatans, The White Room, Up To Our Hips, With The Charlatans