The power of music is more important than ever in this crazy world we live in. I feel fortunate to have enjoyed two nights in a row listening to Michael Head & Gerry Love singing songs of escapism, love, life & dreams.
Douglas MacIntyre's FRETS Concerts have blossomed over the last couple of years, bringing songwriters out to his charming hometown of Strathaven, deep in the Lanarkshire countryside. Strathaven is a lovely town, but it's also very hard to get to via public transport. So people have to make a little bit of extra effort to get there. I think that adds to the sense of occasion. Along with the fact that the venue is a gorgeous country hotel. And also it brings a little sense of escapism ... from the norm ... from reality. We all need that right now!
Michael Head was once memorably described by the NME as being 'a lost genius and among the most gifted songwriters of his generation.' If Head was lost for a while, he has been found again. Dear Scott, his most recent album, may well be my album of 2022. Every time he tours he seems to increase the size of his audience. Word of mouth is getting around. It will be interesting to see what venue he plays next in Glasgow after selling out Saint Lukes.
On Friday night I arrived just in time for the end of The Kingfishers first song. Douglas MacIntyre seems to be in almost as many bands as Stu Kidd, so it's almost inevitable that the two of them are now in one together. The duo chose to play a set of Buffalo Springfield covers and they played them beautifully; 3 Stephen Stills songs and 3 Neil Young songs. Mr Soul and Bluebird were real highlights and I was reminded what an incredible song For What It's Worth Is. MacIntyre & Kidd sang and played with ease. I really enjoyed their set.
Support on Saturday night was via Jim McCulloch who has played with many bands through the years, as well as releasing under his own name and under the Green Peppers. Jim played a short set that included a song from Isobel Campbell's excellent Ballad of the Broken Seas. Jim plays throughout the album, but contributed one of his own songs, the gorgeous instrumental It's Hard To Kill A Bad Thing. Jim added some vocals and it sounded beautiful. Opening song Chorus Of Lists was a fast flowing melodic gem and closing When I Mean What I Say received a very warm response. 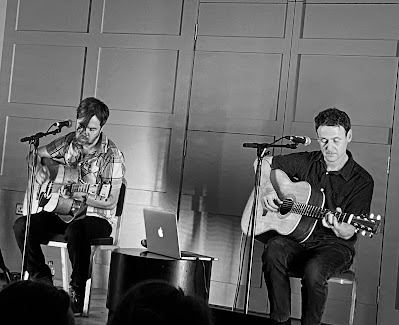 It's been almost 3-years since I last saw Gerry Love when he played a Lightships show as part of The Great Western.  Oh how I've missed his voice and songs. This weekend, Gerry was only backed by Noel O'Donnell on guitar & harmonies, with the addition of a laptop that played a low keyboard drone to back the songs.
Ah the songs!
Gerry Love inspires devotion and he received a huge welcome as he came on to the stage each night, between songs and he received a standing ovation from most of the crowd.
The setlist varied slightly across both nights. I bumped into Noel in the bar before the second show and he told me Gerry appreciated that a few people were coming both nights.
From memory (I never take notes when reviewing!) Gerry played Star Sign and Ain't That Enough on the Friday night, but not on the Saturday. Hearts melted. Gerry & Noel harmonised beautifully. Hearing the songs stripped back made me appreciate them even more.
Sweetness In Her Spark was absolutely sublime. Love on tip top romantic form. Take The Long Way Round was played both nights and I have to admit I got a little emotional hearing it.
Pull the subway to the station
For that golden light sensation
Gerry played a new song that sounded as perfectly formed as his long loved classics. It flows superbly and his voice is sounding better than ever. I spoke briefly with Gerry afterwards and he is looking really fit and well.
Sometimes the world it spins it round
And I can't see it through
Sometimes I need to close my eyes
When I look for you
Someone posted a video of this song on the Teenage Fanclub Fanclub Facebook Group and someone commented I'd listen to this boy till empires crumbled. He spoke for everyone.
On Saturday Gerry played a cool cover by a New York street artist. Do Your Thing by Moondog. It's well worth checking out. He also played the gorgeous Silver & Gold from his Lightships album.
Closing with Sparky's Dream on Saturday, Gerry Love reminded everyone in the audience of his treasure trove of songs that can simultaneously tug on heart strings and make you punch the air in delight.
Lets hope there is news about a Lightships or release under his own name very soon. 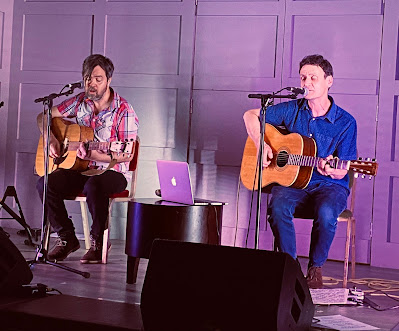 On to Michael Head who has been winning hearts through his songs since the mid-80's with The Pale Fountains, then with Shack and now under his own name with his Red Elastic Band. 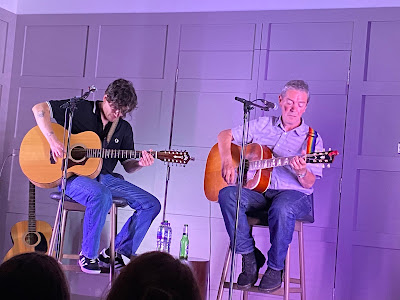 A sizeable group of scousers had followed their Pied Piper up to Scotland and I have to give them a very special mention as they generated a fantastic atmosphere.
Head was quick to acknowledge his appreciation of the crowd, venue and everyone at FRETS on both nights. He seemed to be delighted to be playing in such a lovely setting. On Friday Michael said he'd mostly be playing songs from his Dear Scott album and that they could be played as a 2-piece, 5-piece or 18-piece. And then he got started!
What an absolute treat to watch this guy up close and personal! Backed by his band mate Nate on 12-string or acoustic, Head played his acoustic super tenderly at times, before absolutely battering it at others. And he never re-tuned once!
Broken Beauty (written with his daughter) is a delightful song. Head's voice is so dreamy, so naturally melodic. Kismet (lead single from Dear Scott) has a chorus that rises and falls beautifully.
I mentioned the sizeable scouse contingent that were up for Friday's show. They came into their own (along with the rest of the crowd) when Head played Meant To Be from Shack's Here's Tom With The Weather album, singing the horn section with real gusto. It was incredible, Michael and Nate looked at each other as they jammed the furious ending. The crowd sang on and so they started playing again. Check it out on Twitter HERE A real spine tingling and heart warming moment.
Head also played the sublime As Long As I've Got You and Byrds Turn To Stone from that album. Majestic examples of his songwriting skills.
Further evidence of his genius was delivered in the form of Comedy from Shack's H.M.S. Fable album. The way Head (and a large section of the crowd) sang the line when you cry it pulls me through was as soulful as I have ever seen or heard.
On the Saturday night Michael also got his sister up to sing the Shack song Daniella. What a voice! It was a beautiful moment.
Just to go back to Head's guitar playing. I was spellbound by the way he could be playing furious rhythm one moment and then gently plucking a few strings the next. The way he arranges his songs is stunning. That comes across on record, but to see him play in this stripped back form really highlighted how clever he is, not only with his lyrics, storytelling and melodies, but with the arrangements.
It was a genuine pleasure to be at these two shows. I hope that it's not too long before they are both playing in or around Glasgow again. And hopefully Gerry starts recording some new songs soon. 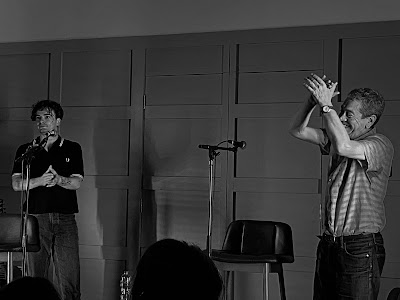 Great review wish I had been there