What a joy to watch Edwyn Collins, a master in the craft of songwriting, in such a beautiful setting last night. The gorgeous sunshine helped create a real festival vibe; t-shirts, shorts, summer dresses and shades had everyone smiling, the whole bandstand seemed to be glowing with positive vibes.

Clare Grogan, performing under the name of her band Altered Images, enhanced the vibe. Clearly delighted to be playing to a packed Bandstand, 2-years after she was initially scheduled to play with Edwyn.

Wearing a sparkly silver dress while tottering and dancing on high platforms, Grogan delighted the crowd with hits like I Could Be Happy, while mixing in new songs written with Bobby Bluebell and Bernard Butler from the forthcoming Altered Images album. The pure pop sound was blissful in the evening sun. 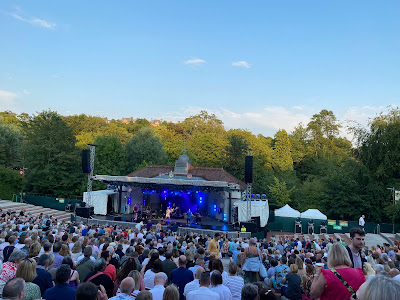 Don't Talk To me About Love got the whole Bandstand on their feet to dance and sing, an emotional Grogan was close to tears as she thanked everyone after. Released almost 40-years ago, Grogan highlighted that if you'd told her back then that she be playing it to 2,000 people in Kelvingrove Bandstand then she wouldn't have believed you.

Happy Birthday was beautiful, fun, catchy and euphoric pop music. And the crowd responded en mass again. Grogan wished everyone well and said she was off to get a drink to watch Edwyn, urging us to do the same.

At 9pm Edwyn's band took to the stage, followed by Collins himself, dressed in a super sharp suit and white shoes. Ever the mod. The crowd stood and cheered as one, a warm ovation for a truly beloved performer.

Collins directed his band straight into the pounding northern soul influenced Losing Sleep. We were standing in the very back row (before going down the front later) and I took a minute to just take it all in. What a setting for live music! Glasgow at it's very best. 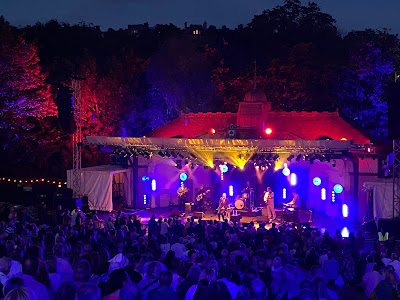 Then it was into Falling & Laughing, the debut single by Orange Juice, released back in 1980 when Collins highlighted that he was 20. The Chic influenced groove is timeless, Collins poetry is beautiful
I'm not saying that we should build a city of tears
All I'm saying
Is I'm alone
Make Me Feel Again is one of my favourite songs by Edwyn. Ultra romantic, the way you turned your head, when I called your name. A sublime melody.
You can check the setlist below. Wheels Of Love was a real highlight, Dying Day was simply stunning, Simply Thrilled was simply thrilling and we decided to head to the front just in time for the start of Felicity with the crowd heartily singing the backing vocals.
Edwyn's son William came on stage to sing the brilliant pop song Into Your Eyes, another real favourite of mine. Edwyn sang the verses and then William came in to sing the soaring chorus.
And if you wanna go
Then I'll let you go now, you don't have to stay
Sometimes I get tired
And I know you've got to find your own way
I see it in the sky
I see it in your eyes
Edwyn proudly gazed at his son and then the two of them locked eyes in a a father and son moment to cherish. I got a little emotional. What a song! 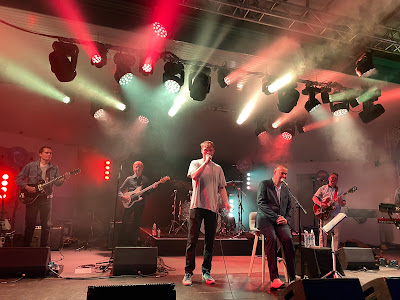 Rip It Up was an absolute delight, the atmosphere down the front was electric with an age range from teenagers to a couple who may well have been in their 70's. Everyone was dancing and singing, escaping reality for a blissful moment. Edwyn felt it too, rising to his feet and waving his walking stick.
Don't Shilly Shally went down so well that the crowd were still cheering as Edwyn introduced A Girl Like You, so he had to pause and introduce it again. The ferocious guitar riff over super cool bass and beats was like an electric bolt through the audience, everyone sang the riff.
Returning for a sublime slow burning Low Expectations and a rip roaring Blue Boy, Edwyn and his band took a well earned bow to rapturous applause. What a night! 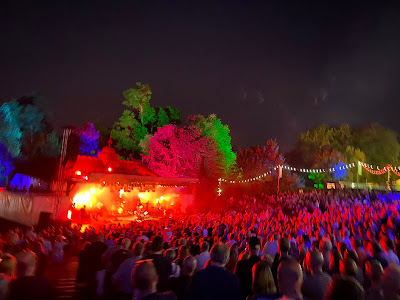 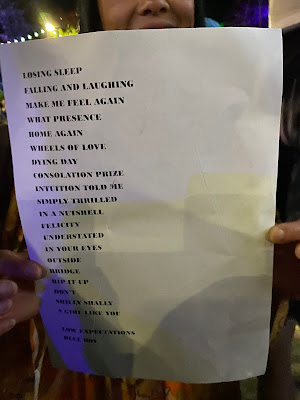