My friend Gordon Reid has written a few guest blogs before - including one on Prince at the Hydro.

Gordon contacted me and asked if he could write a guest blog on one of his all-time favourite bands who were in the middle of playing their farewell tour; set to include a show at St Lukes in Glasgow.

I admire Gordon's passion and dedication; how could I refuse?

It`s not you , It`s me. I`m not really in the right place for a relationship just now. I think we should just be friends.

In early September fans of Augustines received the equivalent of that “Dear John” letter via Twitter and Facebook when the band announced that the current tour would be the last.

They were quite clear that they haven`t argued or fallen out, still love each other but the challenges for artists in the modern music industry are so hard now. This is something Murray and I spoke about a few years ago when discussing new bands and record deals . Spotify might be a wonderful thing for fans and bigger artists but its hard to see how it helps the little guys and without new music coming through ………… however that argument is for another day.

My wife Heidi, discovered We Are Augustines back in 2011 and introduced me to them. It was love at first sight / listen for me and I have been hooked completely ever since. We have seen them every time they have played Glasgow , travelled through to Edinburgh and booked festivals just because they were playing. I once shouted a conversation with them behind a tent at TITP where I`m sure they never understood a word I said and just politely nodded and smiled at me. I`ve stuck with them through a name change as they returned to their original name Augustines. I`ve given them a bottle of single malt whisky as a gift at the Queen Margaret Union  in Glasgow and met Billy in the bar at Broadcast when he was doing his solo show at the start of the year. It was my first gig after my mum passed away and I took comfort in music as I have done all my life.

From Rise Ye Sunken Ships through Augustines to This Is Your Life I have bought and consumed their music. This is what it is like when you find a band who speak to you and it becomes a connection although I`m basically a stalker in this relationship.

The hardest part of the marriage came on Thursday night at St Lukes, Glasgow . The gig had a set list but went on tangents through the night , someone shouted down from the balcony and Billy went off singing New Drink For The Old Drunk acapella. 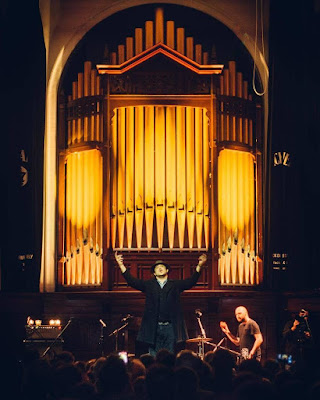 Rob and Eric came out to speak to the crowd, it became like a planned break up speech that rambled as other parts were thrown in but the crowd didn`t care. They were raucous, the music was loud and I didn`t want it to end because I knew what the end meant.

One part stood out for me and probably shows what music means to many. We met a friend, Fraser, at the gig and I knew that one particular song meant a lot to both of us. Without going into detail, when they sang Philadelphia I just reached over and put my arm around the daft bugger and gave him a cuddle that we both needed. Music brings out emotions that we struggle to control, Heidi was in tears several times as were many standing close to us . I sang every word all night but couldn`t find the voice to sing Landmine, it just became to hard for me to do.  The writing on the back wall at St. Lukes says “ RISE” and it seemed appropriate on the night .

So we saw then at the start, rose with them as they grew and then went through the wringer as they told us it was all over and walked away into the dark night.

I loved them then, I love them now and I`ll love them for always .
Posted by everythingflows at 14:03

A lovely tribute to the power of music