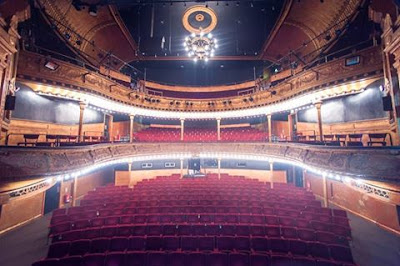 The Citizens Theatre is a beautiful venue in the Southside of Glasgow, just a short walk from the centre. The magnificent Victorian Theatre is looking to start putting on live music (and also to raise funds for the Theatre Redevelopment Fund), so decided to ask a few people to curate some special nights under the banner of The Citz Sessions.

The first night was curated by Ann McDonald from The Shop Assistants, although Ian Smith, my friend and co-founder of Last Night From Glasgow, was also involved. This delivered a brilliantly eclectic line-up.

As Ian had a front row seat I thought I would ask him to write a blog on Friday night at the Citizens.


Citz Sessions - curated by Ann McDonald of The Shop Assistant

So on Friday Night I attended the first of 3 Citz Sessions concerts, specially curated events run to raise funds for the Citzens Theatre Redevelopment Fund.

The evening began with 4 songs from Annie Booth, Annie spends some of her time as a member of the fabulous Edinburgh band Mt. Doubt. Those who know me, will know Ive been raving about their debut album all year. I'm also a big fan of Annie, her songwriting talents belie her years, part Sandy Denny part Christine McVie - both fragile and commanding at once. She walks that dreadfully tricky line where contemporary folk meets traditional, her voice demands complete silence and the audience duly oblige - its a stunning start to what will prove to be a genuinely wonderful evening of music.

Next up is Fennela (Mairi Fennela Whittle to be exact). Mairi is the daughter of a good friend of mine and is a classically trained musician, who truly understands the voice as a musical instrument. She begins with a frankly staggering rendition of My Funny Valentine, her effortless jazz stylings bring comparisons with Billie Holiday and  Cleo Laine, it is however - in my opinion - when she drags us into the darker world of her songwriting that she truly shines, her closing track I Will Not Win much more Martha Wainwright or Sharon Van Etten than anything that came before - its a change of style from much of her set but as the chap behind me in the audience said "that was worth the entrance fee alone"

Third up - our very own - Emme Woods, Emme brought a full entourage - Barry James O'Neil (Kassiday) on Keyboards and Vocals, Neil McKenzie on Trumpet and TTV's very own Jamie Logie on Guitar. The band looked dashing suited and booted to compliment the sophisticated surroundings. Emme (Morgan) was on fine form, the change in this artist over the 10 months that I have known her is staggering. She is now a commanding front woman with a voice to die for. In Barry she has found a perfect foil both as a songwriter and as a performer, they wrap around each other beautifully and the added colour provided by Neil and Jamie turned the Citizens into a David Lynchesque Desert soundscape for 20 minutes. Their cover of God Only Knows was a particular highlight and brought some shade to what was otherwise the heaviest set of the evening. 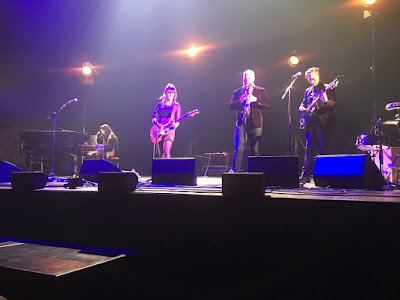 View from the front for Emme Woods

A small break for the bar was next before we were treated to the occasionally bewildering but always delightful world of Frances McKee. Referencing a song from Sex with an Ex and the presence of Eugene Kelly in the audience, she quashed our curiosity "Never - only ever professional" "I shagged everyone else in the band though" she said before "Only Joking".
No performance from Frances would be complete without the odd forgetten lyric or misplaced note but that has always added to the charm for me. She remains one of the City's if not Country's most important song writers full stop.

Now came what I personally had been waiting for. When asked to get involved with this event I pitched an idea that would see all the acts performing with only a grand piano, clearly this was not to everyone's liking but to my absolute delight TeenCanteen grabbed the opportunity and took the stage adorned in black. It was a nice, if cruel touch to put Debs (so used to hiding behind the drums) front and centre. We were treated to reworking of several TeenCanteen classics (yes you can say classics after only a few months) and a Shop Assistants Cover Version. The opening - Sirens - has been one of my favourite songs for over 2 years now but on Friday night, it took on a whole new life as Carla's lead vocals wove in and out of the frankly heartbreaking accompaniment provided by Sita, Debs and Chloe. Kung Fu Heartbeats - just four vocals, handclaps and finger snaps was another highlight from a cracking night in a wonderful venue. 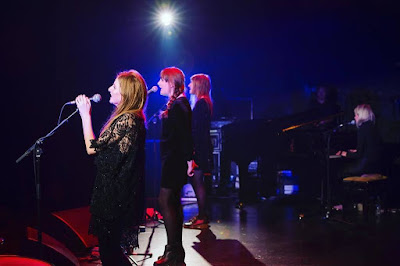 TeenCanteen - harmonies and a Grand Piano

Another very short break before the final act, I have to say I was both excited and fearful of what Clare Grogan and Altered Images might turn out to be. The new band, a three piece all girl combo were tight and funky as hell and Clare's vocals were heard long before she was seen, it took a loud Wegie "I'm behind you" for the audience to turn around and see our local Diva atop a chair and reclining in a Marlene Dietrich stylie. She reached the stage and delighted us with a stripped back, lively and note perfect journey through early 80's pop. I Could Be Happy and Happy Birthday were unbridled joy but it was Don't Talk To Me About Love that reminded the audience of what a talent she was and on this performance still is. 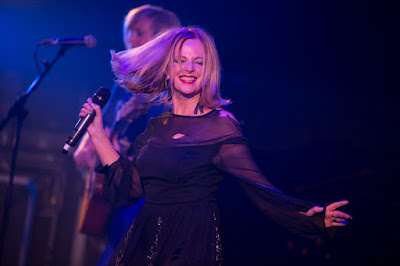 Claire Grogan captured in full flight
Posted by everythingflows at 13:00