Considering their lack of game/stage time over the last few years, it hasn't taken long for Teenage Fanclub to get ring ready again. Last night, in the beautiful setting of the intimate Islington Assembly Halls, they delivered a blistering set of old faves mixed in with some choice cuts from their new album Here, out on Friday and reviewed HERE.

Start Again got things flowing, Don't Look Back was dropped in early to a great reception, the band were gelling, smiling and having fun....as were the audience.

The setlist was fantastic; Norman, Gerry and Raymond taking it in turns to sing one of their songs like they were almost trying to top trump each other. About You was as glorious as ever, so simple, so pure. I Don't Want Control Of You brought a tear to my eyes as I thought of my daughters back home.

The new songs held up well, slotting in with ease. Raymond's Hold On and Norman's Darkest Part Of The Night sounded fantastic.

Ain't That Enough generated a huge reception, arms were aloft and the chorus was being bellowed back at the band. It was fantastic to see the band away from home and to witness the response they were receiving from adoring fans. There were people with their kids, it was great to see. 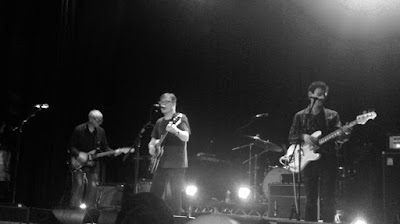 Thin Air and I'm In Love sounded sublime and Raymond's Your Love Is The Place Where I Come From just gets better with each and every passing year. Some of the songs are like warm blankets, comforting and soothing.

Sparky's Dream had an urgency to it while The Concept was glorious. Dave McGowan was behind keys/hammond most of the night but when he came down to join Norman, Gerry and Raymond he helped to create a wonderful 3 pronged guitar sound.

Watching and listening to Norman and Gerry singing together, Raymond stretching and bending notes, listening to the extended harmonious outro, I felt a sense of pride in my favourite band, the boys from Bellshill coming down and smashing London, Everything I love and have loved about Teenage Fanclub was on display and the new songs only deepen the love. 25-years and counting.

ENCORE- I Need Direction, a fast flowing Can't Feel My Soul with Dave taking centre stage as Norman went to play keys and then of course, the incredible Everything Flows.

If you're going to Edinburgh or Manchester this week then you are in for a treat. If you don't have a ticket for the winter tour yet, then get one.

Special thanks to Terje, Ruthy, Denver and team - fellow Teenage Fanclub Fanclub members, for their company and stories. See you at the Barrowland Ballroom and the ABC! 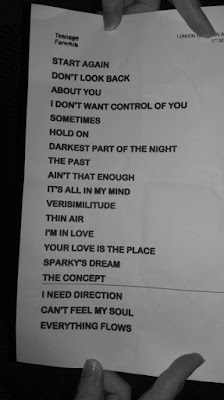 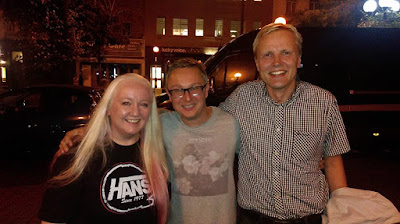 'Start Again' reduces me to tears everytime I hear it. I need to steel myself before I catch the band in November. Great review.