Tim Burgess is an energetic and creative soul; always on the move, always moving on, embracing the times, the sounds and opportunities; 12 albums with The Charlatans, numerous EP's and singles, working with The Chemical Brothers, Ladyhawke and others, 2 solo albums, Tim Peaks coffee and diner that tours festivals, O'Genesis Record label, 2 acclaimed books, a compilation album and now a 3rd album with a little help from Peter Gordon....Tim's fantastic use of social media keeps you up to date in the modern day and age, but looking back, he's always been creative, industrious and productive.

Tim talks of liking to be pushed outside of his comfort zone in his latest book Tim Book Two - Vinyl Adventures from Istanbul to San Francisco. The opportunity to record with Peter Gordon presented itself to Tim and it great to hear of Tim rising to the challenge. This subsequently led to the album Same Language, Different Worlds released today on Tim's O'Genesis Records. 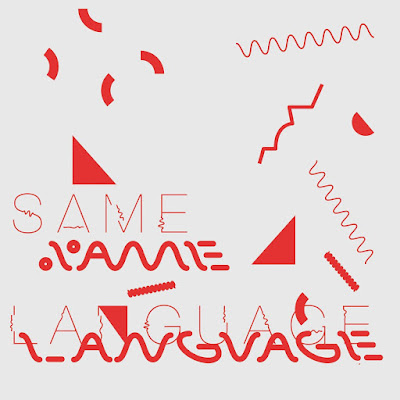 Peter Gordon is equally prolific and open to working with others; ranging from jazz and opera through to influencing James Murphy and LCD Soundsystem.

Same Language, Different Worlds is an album recorded by two men in their late 40's and mid-60's. There is a worldly feel to the lyrics and the music is beautifully balanced between traditional and futuristic. The vast majority was created online with each artist sending each other ideas and building and bouncing off each others. It's how things happen in 2016 - you meet, but then spend large amounts of time communicating online.... demonstrated perfectly with this album.

There is something hugely refreshing about the whole album as it sounds so spontaneous and free flowing. Kind of amazing as Tim and Peter apparently only got together in a studio on one occasion. The album was largely created by Burgess sending acoustic demos to Gordon who returned them in a completely different form. The two met at a warehouse back in 2012, with Tim being a fan of Gordon's work with Arthur Russell and the Love Of Light Orchestra amongst others.

The album begins....with Begin. Probably the most structured song on the album. It is bright, breezy, beautiful and it makes me smile every time I listen to it. The guitar riff is like a mini Nile Rodgers and Tim sings....

Say is kind of hypnotic. Dreamy is a word I am likely to use a number of times in this blog!

Love Is All Around Me is incredible! 6 minutes and 10 seconds of electronica, jazz and Tim pouring his heart out. It's modern day blues and soul for 2016. Synths bubble and pulse.

Miss you every day
Miss you still
Always have
Always will

The instrumental following the above lyrics is glorious; freeform electronica jazz stretching out over funky percussion. Beautiful stuff.

Being Underguarded is trippy psychedelia. Burgess is in fine poetic form throughout this album. Let loose to go with the flow.....and be unguarded.

Ocean Terminus is ushered in with powerful warm chords and Tim singing the title. The music is dreamy and the album title comes from lyrics used in this song. 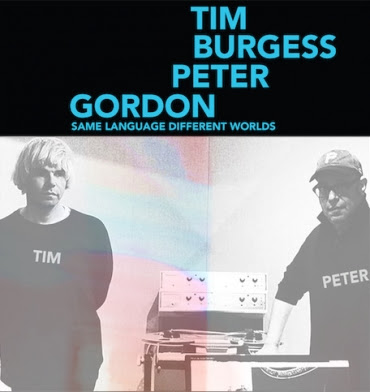 At 12 minutes and 17 seconds long I have to admit to being immediately drawn to Temperature High to see what Tim and Peter have come up with. I wasn't disappointed. Gordon creates a high tempo (but not in your face) groove over shuffling percussion while Tim sounds like he is dreamily ad libbing (not sure if he did or not). He finds a hook around 3-minutes in with we're under the same sky. Gordon is then allowed and inspired to take the song on for a lengthy journey.

The psychedelic, futuristic, dreamy free flowing nature of the album continues with Like I Already Do a. The song is a duet with Tim's partner Nik Void. The dreamy vibe goes space age around 6-minutes and 30 seconds in and it surely can only be a better of time before Tim and Nik produce more music together. 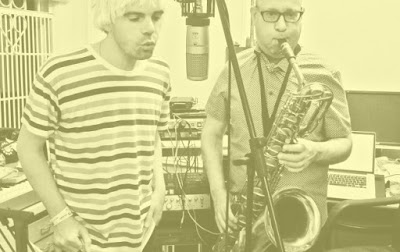 Tim and Peter in the studio - amazingly it only happened once!

Space jazz opens Tracks Of My Past in an uplifting manner allowing Tim to reminisce about his past. Just after 3 minutes 30 seconds piano and saxophone meet to create something quite glorious. The way the song breaks down to the outro is superb.

So what could close an album as eclectic and free flowing as Same Language, Different Worlds? The answer is the blissful Oh Men. The intro has a kind of happy and warm glow to it, enhanced when Gordon's saxophone comes in

Started reading your excellent review, paused to buy the album halfway through and was listening to it by the time I got to the final sentences. What a world we live in.