Cover version of the month #16 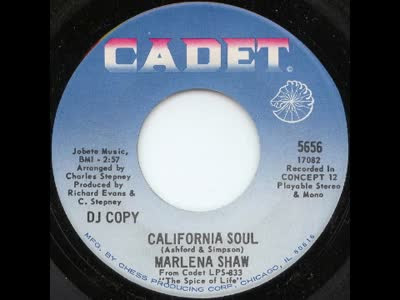 I have to say that I always enjoy sitting down to write my monthly Cover Version of the Month blog. As well as sitting down to listen to music with my headphones on, I tend to discover loads of facts about, and additional versions of, the song that I choose.

This month is no different. California Soul is a song I have been in love with for decades. I have been fortunate enough to witness Marlena Shaw perform the song on two occasions, both at the Renfrew Ferry in Glasgow.

The first time was so long ago that the Ferry was on the other side (South) of the river. It had fallen into disrepair and was sloped to one side....probably slowly sinking! I have witnessed many incredible responses to songs at shows in Glasgow, but the rapturous reception to California Soul on that evening remains the best. It must have been a 10-minute ovation, the crowd just kept cheering.

So I always knew about Marlena's version. And I also knew about Marvin Gaye and Tammi Terrell's version; one of many stunning duets that the pair sang together until Tammi's death from a brain tumour - the single was released shortly after her sad passing.

I thought that was the original as the song was written by Ashford and Simpson, the talented songwriting duo behind several Marvin and Tammi gems like Ain't No Mountain High Enough, You're All I Need To Get By and Good Lovin' Ain't Easy To Come By.

In actual fact the song was originally released as a b-side!!!! Yes a b-side! By a Motown group called The Messengers; a b-side to a song called Window Shopping in 1967. I thought I had better check this song out if it relegated California Soul to the b-side! It's OK in a harmless early Beach Boys kind of way, but no California Soul!


The original is really the template used by The 5th Dimension who issued it has a single in 1968, then Marvin and Tammi in 1969 and by Marlena Shaw late that year on her Spice Of Life album. They just ramp it up a bit, the original is just a little too slow and lacks the urgency that the others bring to it.

The 5th Dimension bring in a Mama's and Papa's and Sly and the Family Stone kind of feel to it, I think it's only when Marvin and Tammi come in that the true potential is realised.

With Marvin and Tammi uplifting strings and a classic Motown beat kick in from the off, Marvin and Tammi's voices deliciously combine and entwine and then they each take their turn to take the song on. Interestingly their version was also a b-side; to The Onion Song. 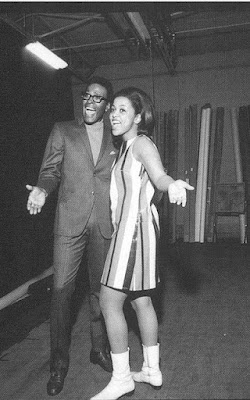 As much as I love the Marvin and Tammi version (and virtually everything they recorded together) it is in the hands of Marlena Shaw that the song finds its definitive owner. The urgency is ramped up with the strings and the groove, Marlena's voice is effortless - soaring, injecting a bit of urgency when required. Listen in at 1 minute 16 when the strings take off for a ride and Marlena says in the background 'ooh it feels good'.

At other times she laughs into the mic, clearly enjoying the song, the feel and the soul. The closing 30-seconds are sensational as strings, brash, groove, beats and Marlena all come together to take the song to a glorious conclusion.

So this months cover version of the month is California Soul - it's a beauty and I have learned something about it. Hope you have too!

15. I Wish I Never Saw The Sunshine