The View are on fire

Every now and then I ask a friend to write a guest blog. I always enjoy reading about friends passion for music on social media and it often turns me on to artists I may never have checked out for myself.

This morning my friend Gordon Phipps, bass player in Vigo Thieves, sent a text to say he was at the Barrowland Ballroom for the second night running to see young veterans (10-years and 5 albums in but still in their late 20's or early 30's) The View and asked if I would like a guest blog review.

Gordon is one of the biggest music fans I know. Equally at home in the Sub Club or at Electric Frog, catching a new band at King Tuts, or one of many acts ranging from the likes of New Order and the Roses through to First Aid Kit and Sister Sledge. His passion shines through and I have shared many a great night out with him.

So lets see what Gordon has to say about The View at the legendary Barrowland.

The View at the Barrowland Ballroom, September 2016 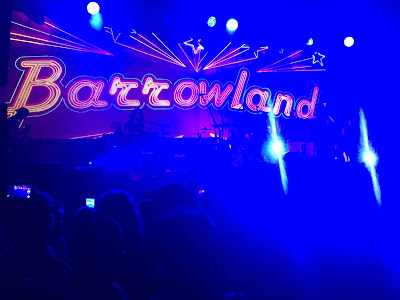 Ten years ago these boys went pretty much from the school bus to the tour bus. A decade on and it's a night to celebrate their terrific debut album Hats Off To The Buskers.

I arrived just in time to see a blistering set from The Law. The reformed Dundonians seemed to have a new zest for performing live after an extended break. The Chase and Milk and Honey were particular highlights for me and singer Stuart Purvey seemed to be having the time of his life on stage.

Next up was a tribute to The Lapelles who were set to make their Barrowland debut supporting The View tonight. Tragically their singer Gary Watson passed away a few weeks ago, leaving the band and the Glasgow music community shattered. So it was a fitting tribute that the band still got to play the hallowed stage. Introduced on by Kieran Webster, the band were joined by their friend Gianluca who filled in Gary's vocals. This must have been the toughest gig the boys have ever played, however ,like true professionals and friends they absolutely smashed it and it was a fitting tribute to their late band mate. 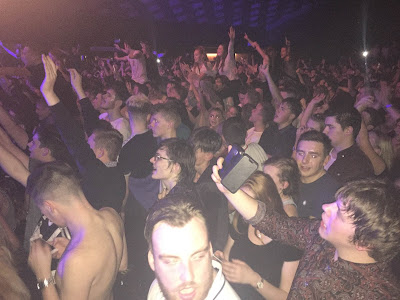 The View walked on stage to massive cheers from the crowd. Apparently the show sold out in 25-minutes, highlighting their popularity ten years and five albums down the line. They kicked off with Comin' Down, the opener from Hats Off To The Buskers and rattled their way through the album in order.

Kyle (still only 29) looked a picture of health, which in the past you couldn't always say. Every song was treated like an old friend and every word sang back to the stage. Highlights for me were Superstar Tradesman, The Don, Face For The Radio which nearly took the roof off and Wasted Little DJ's which practically shook the floor to pieces

After playing their debut the band went off for a well earned break. Kyle then returned to play a beautiful version of Tacky Tattoo of their Cheeky For A Reason album. Straight after this the full band returned for a sensational encore including Grace, Tragic Magic, How Long, the Rennie powered Sunday, Shock Horror and Double Yellow Lines.

It is a long time since I was down the front pogoing about in a soaking, sweaty mess, but I was there last night because watching The View live will do that to you. Whilst down there I bumped into Paul Grieve) former manager of The View and The Law and current manager of Model Aeroplanes). I doubt you will see many managers down the front at the Barras but it shows the passion and the love he has for this music, just like the rest of us. 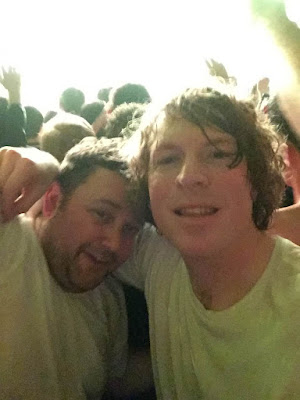 Paul and Gordon
Posted by everythingflows at 12:54