Peter Hook and The Light at Glasgow Barrowland 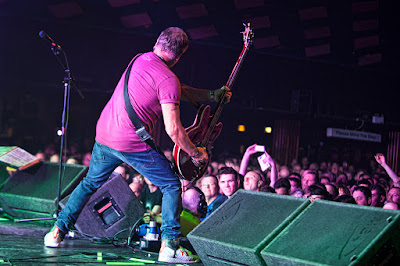 After almost 3-hours on stage legendary bassist Peter Hook removed his instrument and then peeled off a soaking t-shirt, gave it a careful and considerate wring, and then threw it into the adoring mass of fans chanting 'Hooooooky'.

Bare chested and with a few tattoos, he beat his chest and saluted the crowd. He looked like a warrior, in many ways he is one. He's taken on more than a few battles in his time and there were moments on stage at the Barrowland Ballroom last night where it was crystal clear that he was playing as if his very life depended on it.

Where does this 60-year old veteran get the energy and the stamina from? Well, towards the end of the lengthy show, the evidence presented itself. The audience responded to the sheer energy of Joy Division songs like Transmission and She's Lost Control and Hooky somehow took it up a level, using his bass like a weapon to unleash those bass lines that won hearts all over the world.

The answer is that there is no bigger fan of Joy Division and New Order than Peter Hook himself. His mission is to travel the world playing their back catalogue to fans of all ages. That catalogue brought him to Substance, New Orders incredible compilation album, originally released in 1987; compiling all of their 12-inch singles and b-sides to that point alongside new single True Faith. 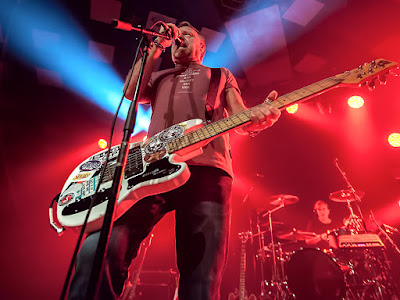 It took a few songs for things to ignite, but once the flame was lit, there was no going back. Ceremony was delivered at breakneck speed, sounding sensational. Hooky patrolled the stage and fired the bass riff down the throats of the audience.

Everything's Gone Green still sounds futuristic all these years down the line and Temptation is one of my favourite songs of all time. I abandoned my wife and friends to run into the centre of the crowd for some mad dancing and pogo-ing, lost in the music.

Blue Monday was a delight, a young couple in front of me danced like they were in the Hacienda in the Second Summer Of Love and looked like they were too. To my left there was a Dad with two teenage daughters who had been glued to their mobiles for the first few songs, now they were dancing with their Dad and like everyone else in the Barras.

Hooky is backed up by a cracking band including his son Jack on second (and sometimes duelling) bass, Andy Poole on keyboards, Paul Kehoe on drums and David Potts on guitar and vocals.

Potts guitar playing was exceptional throughout and his vocals suited some songs more than Hooky's deep voice (I'm sure Hooky would be first to admit that).

The Perfect Kiss was utterly outstanding, intro, verses, choruses, outro....and one extended instrumental allowed Hooky to catch a deserved breath while leaning against a speaker. Bizarre Love Triangle was as majestical and magical as always and True Faith proved to be the most popular New Order song of the night, generating a huge reaction with the crowd singing their hearts out with their hands in the air. 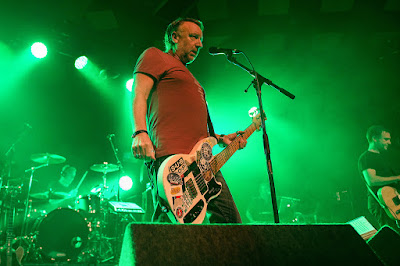 There was time for An Ode To Anthony H Wilson to be played before the band came back on to begin the Joy Division set. This was delivered with pace, menace and incredible force.

These Days was a highlight for me, while many of the older heads around me lost it to the likes of Warsaw, Leaders Of Men and Digital. My favourite song by Joy Division remains the beautiful Atmosphere, so dark, yet so uplifting, reaching for the stars for answers.

Hooky told us they had one more to play and then we could all f**k off home, launching into an epic Love Will Tear You Apart that threatened to take the roof off the Ballroom. The band brought it all back down at one point to allow the crowd to continue to sing the chorus over and over. Hooky looked emotional and had to compose himself before delivering the final verse and chorus.

This was a brilliant night, a celebration of the music of Joy Division and New Order. That is Hooky's mission and this was easily mission accomplished.

A final word on the great man himself. His passion for the music and energy and stamina to deliver such a lengthy set was fantastic to witness and hear. This isn't a show, it really is a celebration and celebrate we did. 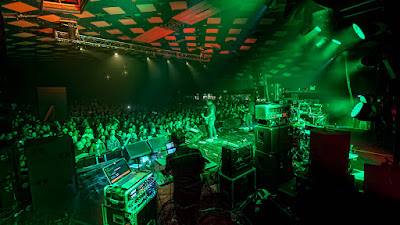