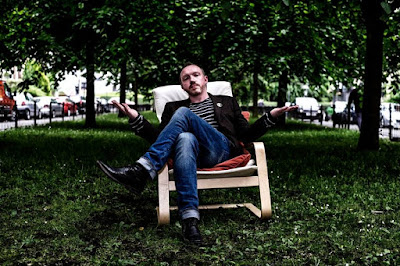 Stephen used to scribble things down, record things on a dictaphone, capture things at band rehearsals, spend hundreds of pounds on studio time, be elated when things worked and frustrated when things didn't. Being prolific is great in many ways, but by the time his band had rehearsed and recorded the songs, Stephen had dozens more to play with.

In 2015 Stephen got an iPhone6+. This is not a blog about an iPhone6+, it is about Stephen Solo. However the iPhone6+ plays an important part; leading to the creation and recording of Pii (short for Phone it in) that was released on Last Night From Glasgow earlier this year.

Pii may well be my album of the year. It is eclectic, eccentric, psychedelic, gentle, dreamy, beautiful, funny..... I hear elements of The Beatles, Talking Heads, Damon Albarn, Boards of Canada, Hot Chip......and Limmy.....and most importantly....Stephen.

Crying Because is one the most beautiful songs I have ever heard. You can watch the video at the end of this blog. Soundtrack To Unfilmed is a widescreen cinematic dream. Behind Your Eyes mixes the crazy with the sublime. There is so much going on in Pii, there is so much to love and as you'll find out from the interview below - there is so much freedom.

I had a wide ranging conversation with Stephen regarding the album and you can read all about Pii in Stephen's own words below. It makes me love and appreciate this wonderful album even more. 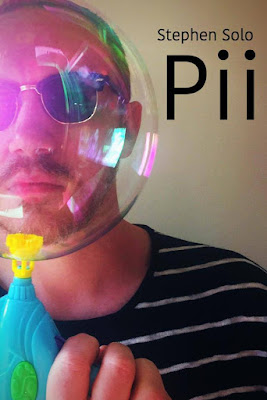 The phone stuff started with little experiments using iPhone and it's version of garage band. But it was too fiddly to use on a small screen, kind of a hassle. I've got over 400 phone demos on the dictaphone app and I'm always having to export them and the time it takes to go through ideas and make them real was just impossible.

I can always produce a fully formed and usually good idea by just doing it...it's like there is no writing involved. That's happened with the band a few times too and there's that magic moment when everyone combines without thinking.

I've always known I had the capacity to produce things in a 'throwaway' fashion and that it's always a little more enjoyable than 'working' on a tune. But I started doing it more when I got the bigger iPhone6+ and just that little screen and finger space led me to doing little videos and cartoons in the same fashion - quickly, intuitively and no thinking....once more it was more enjoyable than writing a script to a song. 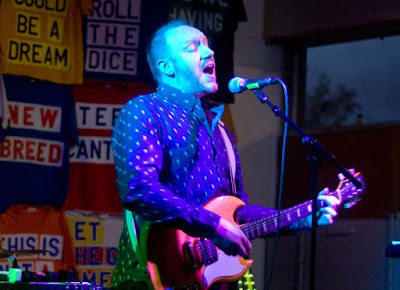 The first app that got me into the zone was 'amimoog' which is a version of the classic moog synth and in just playing with a sound I'm usually already composing...if i find a sound I just get into it and see what it wants to do rather than thinking about what I want. I found certain apps can be linked to garage band through a separate program called 'audiobus' ad this acts the same way as if you were to plug in any instrument in a real studio and put it through the computer. There's always a bridge program to link things...so once I got that I had a look at what other apps could be linked together and essentially set up a virtual studio in my phone with a set up that I liked.

I got a few vocal effect apps including one that mimics the sound of specific microphones and a drum app called 'funk box' that emulates all the classic drum machines from the 80's. I find that if I get a beat I like and a synth or vocal sound set up, I'm into a song so fast that it writes itself.

Over a few nights I would wait until the wife and baby were in bed and just GO. I gave myself the rule of no writing, no stopping, no coming back to it. A tune had to be done in one session from start to finish or when I was tired or had to go to work and this instantly gave everything a special feel or sound.

Behind Your Eyes took me about 2-hours and was done sitting on the floor next to the plug point as the phone was charging. I did the vocal bent over with my head behind the couch so I wouldn't wake anyone up....I had the first verse beat and sound and set up the vocal effect and pressed record. The first words that came out of my mouth were the first take and that's what is on the album.

I then just got another sound and played some chords with a different feel and in the same way 'Behind your eyes, I'll be waiting' was the first thing to come out of my mouth. No idea where it came from but in retrospect it has a theme and means something to me now. Weird!


Behind Your Eyes - Stephen Solo

Freaks was in the same spot in the living room bent over as the phone as charging! Might even have been the next night. I was tickled pink.

Think Of The Stars was done in the office at work waiting on people arriving for a workshop. I did the chords first on the animoog and was thinking about The Beatles song Because. I then removed all the keyboards for the intro and gave it the shape...then people arrived at work and the song was stopped. I did the second half at home and just experimented not worrying about how it fitted. The end section is just me with acoustic and the closest thing lying around was a ninky none train from In The Night Garden, the kids show. It makes a cool sound when it drives around so I held it in one hand and the phone in the other and drove it around.

Tattoo Faced Man was done in the car during torrential rain after a school workshop in the East End. You can hear the rain hitting the car roof. The rain didn't stop for days and you can hear the same pelting rain at the end of When You're A Human as I did he vocal wandering around the house and standing at the open window.

Crying Because was done in one take and the entire song too me almost as long as it takes to listen to it... I went for a shower (it was first thing in the morning) and worked out backing vocals in the shower. So the whole thing was done in about an hour. This is a song about my little boy who used to cry all night. I was trying to imagine the baby monitor translating his cries.