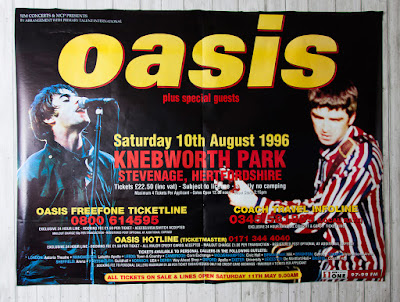 It is 20-years since I travelled from Glasgow down to Knebworth to see Oasis with one of my best friends, Elliott. We bonded over Oasis in 1994 and went on a rollercoaster ride with them.

Knebworth came a little over 2-years since I first saw the band supporting The Boo Radleys at the Tramway in Glasgow. In that time, Oasis had won over a nation with songs, soul, humour and a work ethic that put others to shame. They embraced it; the gigs, the parties, the lifestyle. From the Tramway in April 1994 to Knebworth in August 1996, it was quite a ride.

Oasis came along at just the right time for me - I turned 18 in the January of 1994 and during that year I was fortunate to catch them live on 5 occasions; at the Tramway, the Cathouse, in a tent at T in the Park which remains one of my all-time favourite gigs and twice at Glasgow Barrowland Ballroom......Twice as Liam walked off stage during the first gig after losing his voice. Noel played on and urged us all to keep our ticket stubs and they would be back. They were as good as his word.

Fast forward to 1996. Oasis announced that they were going to be playing huge shows at Loch Lomond in Scotland and Knebworth in England. Here are my memories...and some pictures dug out from an old album that was gathering dust in my loft. 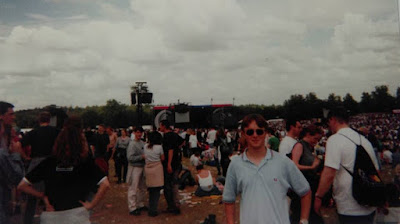 I remember tickets going on sale on Cup Final day. A crowd of us went down to my friend Scott's to drink beer and watch United v Liverpool. I was trying non-stop to get through to the ticket phone lines - either for Loch Lomond or Knebworth.

Being a United supporter, I celebrated a double that day. Cantona scored just minutes before I got through to the Knebworth line and I booked 2 tickets for the Sunday (Saturday was sold out), also booking return bus travel from Glasgow.

The whole nation had been trying to get tickets, they could have put on 10 nights at Knebworth. There were only 2 and my mate Elliott and I were going. 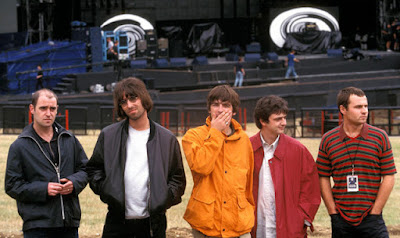 Oasis Knebworth press call  - could have brushed up a bit!

We travelled overnight by a bus which left from George Square. I think it left at 2am. Back in 1996 I was working in an office on Woodside Place up by Charing Cross. I had access to the office, so after a few drinks in town, Elliott and I went there for a couple of hours to hang out before getting the bus! I seem to remember us being ridiculously drunk. If my boss had known.....

We arrived down early mid-morning and there was time to hang out before gates opened. There were bootleg t-shirts galore and touts selling tickets for a fiver! Knebworth was the middle of nowhere so there wasn't exactly a queue of people looking to buy tickets on the day. 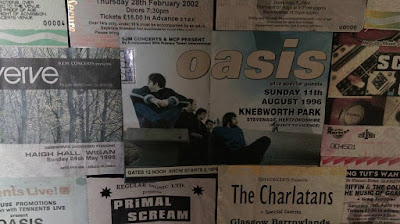 My Knebworth ticket is at the centre of my ticket collage

On entering the site, the first thing that struck us was the size. Looking back I wish we had run straight down to the front to get into Pit 1 (more on that later). But for the time being we did what most 20-year old Scot's would do....we headed for the bar. 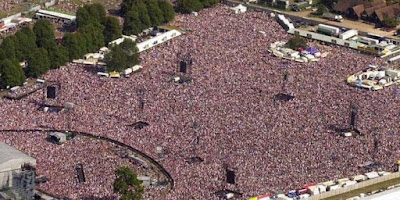 Try getting out for a beer in that crowd!

Knebworth was hopelessly ill-prepared for 125,000 people. There were only a handful of bars and a couple of rows of food stalls/vans. And if you were stuck in the middle of the field then you had no real chance of getting out.

The queue for the bar snaked on for what seemed like miles. No real concern for 6ft 4, good looking and charming Elliott. He simply waltzed up to near the front and charmed a couple of girls to let him in and no-one else was going to argue.

Elliott came back with four beers each and we lay in the early afternoon sunshine and guzzled them down, promptly falling asleep in the sun to the mellow vibes of Dreadzone. 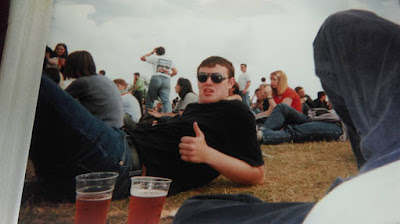 Elliott - got the beers in!

So yeah, I vaguely remember Dreadzone who had a great song called Little Britain. I don't remember Cast or Kula Shaker at all, I think we were content to just hang out and drink beer at that stage as we were so far back. Or maybe we slept for longer than I thought! We had travelled through the night and polished off a homemade Supersonic (gin n tonic) as a carryout. I have no recollection of those bands at all.

The Charlatans on the other hand, have been one of my favourite bands since 1991. They had very sadly lost hammond/keyboard player Rob Collins only 2-weeks prior to Knebworth in a car accident. Emotions were running high and the band issued a statement saying they would be playing Knebworth with Martin Duffy from Primal Scream standing in, ending it by saying We Are Rock!

A super charged Charlatans blitzed Knebworth. We moved to down the front of Pit 3 (the back section where the majority of the crowd were). There was a moat before Pit 2, full of security, no chance of jumping sections.

It felt like we were about a mile back from the stage, watching tiny Charlatans rocking out, but we had the big screens to help us. Come In Number 21 and Feelin' Holy sounded huge and Tim Burgess was singing his heart out. He later admitted that he didn't know if it would be their final show or not. 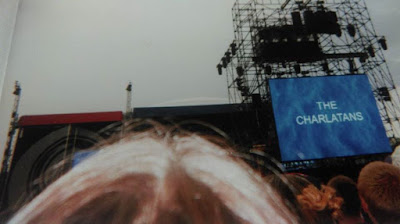 Great view for The Charlatans....

After watching The Charlatans we were determined to get closer to the action. Everyone was sat down chilling and we started picking our way through the crowd to the side, eventually reaching the section where there were some burger vans.

We found the entrance to Pit 1 and brazenly tried to just waltz in, only to be rejected and ejected by a couple of burly security guards. We went for a burger and then Elliott tried plan B; spotting one of the security guards on a break he asked if there was any way he could get us into Pit 1 - closest to the main stage.

He said to meet him back at the burger van in 10-minutes. We waited, we were not going anywhere.

The security guard arrived back with a coffee cup in that coffee cup were loads of wristbands - our golden ticket to Pit 1. £20 each was the fee, we would both gladly have paid double.

Elliott handed over a couple of Scottish twenty pound notes to which the security guard memorably said; 'What kind of Mickey Mouse money is this?'

We got the bands, we were going in

Entering into Pit 1 was incredibly exciting. We gazed back up the hill, looking at Oasis fans for miles and miles on end. The Manics entered the stage just as we arrived and with a disposable camera we snapped some pictures, high on excitement.

Raindrops Keep Fallin' On My Head was a real highlight of their set.....then the countdown was on for the main event. 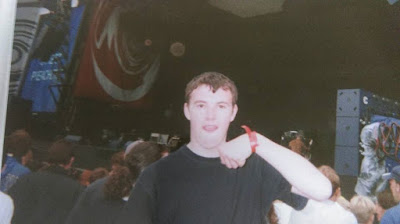 Elliott - we blagged and bribed our way into Pit 1

The gap between The Manics and Oasis was filled by a rubbish fight! Pit 3 into Pit 2 and Pit 1, bags of rubbish were flung about with innocent glee. It was crazy and quite a site. 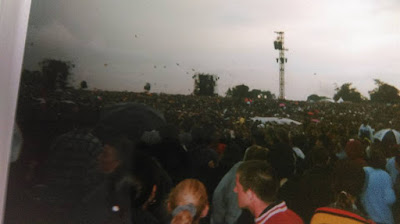 The pre-show entertainment - a rubbish fight!

The atmosphere was absolutely electric as Oasis strolled on stage. We couldn't believe we were so close to the action.


Oasis - Columbia, live at Knebworth 11.08.96
The whole gig is available on YouTube

Liam - 'I thought it were Knebworth man.'

Noel changed the intro to Columbia to include a euphoric and uplifting guitar section with Liam asking the crowd if they were 'Mad for it' before launching into the groove. The place erupted. The memory of that opening still sends tingles down my spine.

The band were incredible. Noel's guitar sounded huge, Liam sang his heart out and was in a playful mood. When Noel was singing he wandered around near the side joking with security guards and swinging from camera cranes. He looked like a star in an XXL Arran jumper and shades! 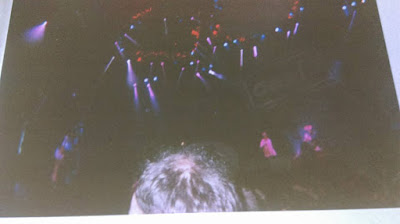 I remember Elliott hoisting me on his shoulders during Morning Glory and still being able to pogo due to the fact that we were so charged with elation at being there. I looked around and behind me at 125,000 people going crazy. It was an amazing feeling.

It was one sing-song after another. Whatever, Wonderwall, Cast No Shadow dedicated to Rob Collins, Don't Look Back In Anger, Live Forever.....

The band were incredibly relaxed. Joking like this was a normal show for them! Liam was only 24 at the time, totally living the dream and loving every minute.

Two new songs were played with It's Getting' Better Man sounding incredible, the chorus seemed to go on forever. I still think it is a very under-rated song in the Oasis catalogue, although I prefer the live version.

John Squire from the Stone Roses came on for the encore. Absolutely shredding his guitar during a glorious Champagne Supernova that went stratospheric; we were there when the band were at their highest high. Squire then went crazy on I Am The Walrus. It was a special end to a special event.

We ended up being just a couple of rows from the front at the end and Elliott actually had his hand on Liam's tambourine as he walked along the front before he handed it to someone he had promised it to.

It was all over in a blur (pardon the pun), it flew by. It was just one anthem after another, a truly incredible performance by a band not only flying, but soaring. So much of that day remains fresh in my mind 20-years on. I dare say that Elliott and I will be reminiscing in another 20-years time. In many ways, Knebworth was the event of our generation.

We stayed back to let the crowds out, resting against the barrier at the front watching fireworks overhead to the strains of Hey Jude. 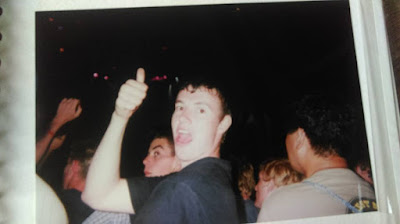 I was 36 at the time and went on the same day as you. When we got within a 20 mile radius of Knebworth, we tuned the car radio into Radio Supernova, before parking in an industrial estate and walking what felt like miles to the venue. As I was driving, I didn't drink at all, which I'm quite glad about having read your description of the queues.
The Charlatans were absolutely outstanding and the other supports were also very good, with the exception of Kula Shaker who I could've lived without.
There was a palpable sense that this was Oasis' moment, even as it was happening, and their performance was indeed imperially magnificent. One of my strongest abiding memories is of shuffling generally in the direction of the exit during 'Champagne Supernova', with a light drizzle in the air. To this day, whenever I hear that song, I can still remember the damp fug of 100,000 sweaty people in the rain.
Great post and photos.

Thanks very much - yeah it was quite incredible. I still get excited listening to the bootleg cd and watching stuff on YouTube.

Great post. I remember finding The Charlatans more powerful than Oasis - I think because of what they'd just been through with the death of their keyboard player and just having the guts to step up and play.

I was in Pit 1 as well, I remember standing close to the back of it where there was quite a bit of space and having a near perfect view of the whole show.

I was there that day too, right at the front of pit 2.
Amazing day, one I will never forget x