The Super Furry Animals won and warmed hearts in Glasgow last night with a set that was spine tinglingly beautiful and soulful at times, and pure psychedelic fun at others.

Taking to the stage in forensic overalls, it was kind of apt. Never a band to go through motions or to use standard sounds (in music or voice), Super Furry Animals use instruments, effects and the studio like a laboratory to see what they can create. Experimentation can lead to some wonderful results.

There were many highlights; the reaction from the crowd during a glorious rendition of Hello Sunshine was incredible. The band had paused and were about to continue but the crowd took over with a huge cheer and the cheer kept going. The band looked visibly stunned.

The Furries dug deep into their extensive and eclectic catalogue; Slow Life opened the show in style, (Drawing) Rings Around The World was all Beach Boys harmonies over a psychedelic punk groove, Do Or Die was fun and uplifting and Ice Hockey Hair was sublime.

Hometown Unicorn was great fun and the my own personal favourite SFA song Juxtaposed With U was totally lush; warm strings pouring from the stage and over the crowd. The setting of Kelvingrove Bandstand was made for a band like Super Furry Animals. 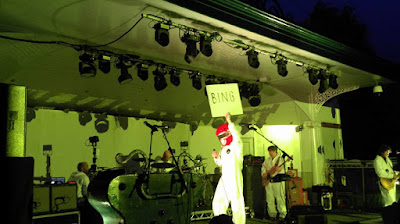 Bing Bong was bonkers. Gruff put on a red lobster style helmet after announcing he was going to sing through his right eye and needed the helmet for protection.

Golden Retriever was another standout for me, although the whole set was joyful. The Man Don't Give A F**k ended things in style, developing into a huge techno tune with the band all going off and coming back on in their yeti costumes.