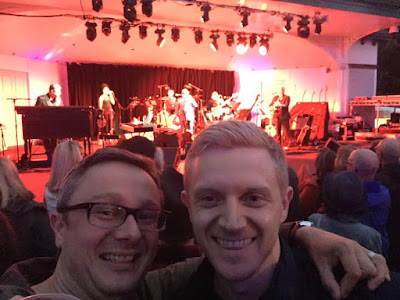 Near the end - with my brother Ross down the front

Talk about a game of two halves!

The first half of Van Morrison's set in the stunning setting of the Kelvingrove Bandstand in Glasgow was a little.....bland. Think jazzy lounge band.

He might have opened with Moondance but it was far from marvellous. It was all a bit...well a bit boring and a bit like they were going through the motions.

The Glasgow crowd was polite and seated....that didn't last for long. A few people got up to dance and Van the Man looked noticeably upset, bringing someone on stage to usher the crowd to remain seated. 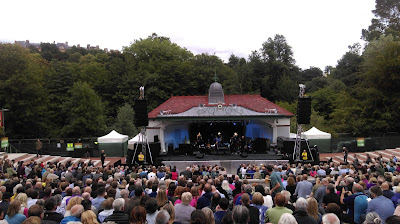 Walking in just in time for Moondance opening the show

It was a Thursday night, the start of the weekend, an outdoor gig, drinks were flowing, a legend was playing....people were not going to remain seated all night long!

Things changed, a raucous Baby Please Don't Go ignited a previously bog standard set where the band and Van going through the motions. Van and the band kicked on to segue into Don't Start Crying Now and an utterly sensational Here Comes The Night.

The band were all session musicians, as tight as you wanted, but it was later on that they came into their own; cutting loose on some great tracks. The drummer looked like he was 18 or 19, imagine cutting your teeth with a bonfide musical legend!

People started to dance - drunk, stoned or just enjoying the music, the Glasgow crowd started to exert themselves on Van and his band. There was no way on earth they were going to sit down through his show. Sometimes We Cry was a real highlight at this point.

There was also no way on earth that Van was going to smile or remotely look like he was enjoying himself. But he gave us some clues. Brown Eyed Girl is a wedding staple and one of his most famous songs but he rarely plays it live.

After a few words with his band it was trotted out. Van didn't seem to know all the words but it didn't matter, everyone else did! The place erupted. Suddenly everyone was on their feet. Previously it had been a drunken few, now it was the whole amphitheatre and it transformed the show.

Jackie Wilson Said (I'm In Heaven When You Smile) followed and the place was going crazy. I can't imagine Van and his band having a reception like this in a long, long time. The space at the front was filled with people dancing, singing and taking selfies in front of the legend.

Arms were in the air, people were hugging, dancing and singing. This was heaven and we were all smiling!

Real Real Gone followed with Van Morrison singing his heart out. We couldn't see behind his shades but he must have been enjoying the reaction from the Glasgow crowd.

The crowd kept singing GLORIA and the band kept on playing. Van was long gone but the band responded to the crowd and played their hearts out. Unlike Van, they were smiling! They jammed and raised it, dropped it and gave everyone solo's. It was a great moment.

So yeah, Van Morrison at Kelvingrove Park - memorable. but the second half when Van, band and crowd cut loose was what made it. 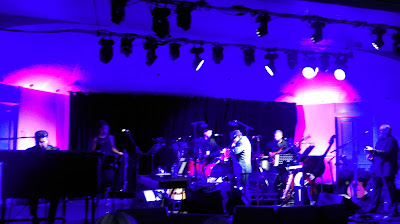