Saint Etienne and The Pastels at the Art School 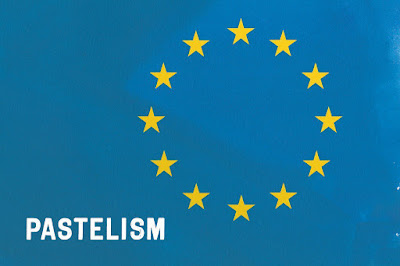 Last night The Pastels and Saint Etienne clearly nailed their REMAIN EU colours to the mast and they were all too aware that they were playing a show as voting around the UK came to a close. Sadly that flag is flying at half-mast today.

Things were running late as Saint Etienne’s train up to Scotland had been hugely delayed, meaning they only arrived into Central Station at 6pm. Load-in, soundcheck.....

The Pastels took to the stage to cheers and Stephen Pastel was quick to thank people for coming and then voice that the referendum results were weighing heavily on his mind.

The 6-piece line-up (two guitars, bass, drums, keys and flute) started with the (largely) instrumental Slow Summits, the title track from their latest album. The contemplative and reflective song was a perfect opener, certainly giving the audience a chance to think about the night and decision ahead as The Pastels weaved their magic.

Songs from the album made up the majority of the set, Night Time Made Us was a particular highlight with the band gelling together to create something quite gorgeous.

The 6-piece became an 8-piece when they were joined by an extra guitarist and Tracy Anne from Camera Obscura for a delicious romp through Nothing To Be Done. The pace quickened and it sounded sublime.

Tracy Anne departed and Stephen strapped his guitar back on (after a little mis-hap) and the 7-piece line-up of The Pastels had 3 guitars creating a wonderful Velvets meets Spector wall of sound for a stunning version of Baby Honey. Originally released in 1984, the song zips with zest and an electric energy. It was great to see the band play again. 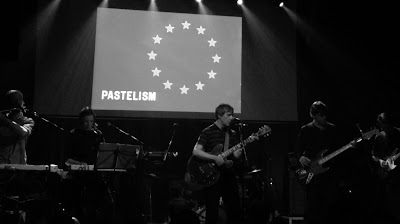 Saint Etienne were a 7-piece for the night. Pete and Bob were set up behind banks of equipment at the back, someone on keys was at one side of the stage, then there was someone on viola, a backing singer, guitarist and multi-instrumentalist. And then the gorgeous Sarah Cracknell on vocals.

Nothing Can Stop Us opened the show and the band were sounding good. There was a slight technical glitch afterwards, Sarah engaged with the audience but as it dragged on she ended up in fits of giggles before we were back on the way.

The set mixed classic singles with some new(er) album cuts and singles. The audience lapped it up as the band showcased their fantastic mix of pure, melodic, catchy, clubby and cinematic pop. 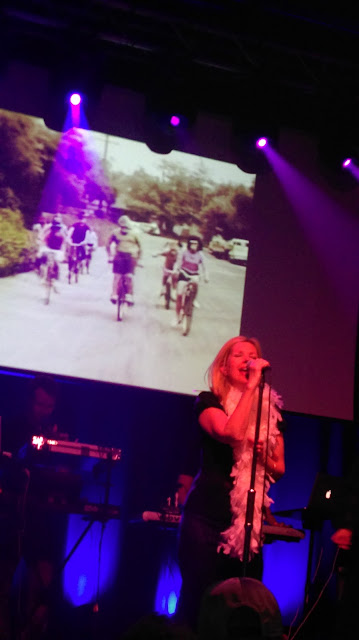 You’re In A Bad Way was the very first Saint Etienne 7-inch record that I bought, away back in 1993. It still sounds fresh, fun and joyous.  Tonight was a highlight from later day Saint Etienne that will definitely see me delving into some of their more recent albums. It was glorious.


The acidic pop of Like A Motorway was probably my highlight of the night, bubbling synths, beats and a dreamy Sarah Cracknell vocal - sublime.

The Saint Etienne cover version of Neil Young’s Only Love Can Break Your Heart (that I previously blogged about here) was just perfect, the old synth sounds still sound timeless, futuristic and Young’s lyrics will always ring true.

The encore started with a beautiful rendition of Hobart Paving, with Sarah Cracknell in fine voice. The poetic lyrics paint picture and it was a stunning performance with Sarah really shining.

Pete and Bob came back on and then it was on to pure pop with He’s On The Phone with the seemingly never-ending chorus that flowed and flowed and flowed, as we all danced, sung and raised our hands in the air. The blissful pop removing the referendum result from our minds.....for a while...