Belle and Sebastian at GUU

Belle and Sebastian didn’t roll back the years last night, they celebrated them, all twenty years of them. They celebrated them with some of their closest family, friends and fans in a location that was even closer to their ‘home turf’ than the celebrated Kelvingrove Bandstand show a couple of summers back.

The band were asked to get involved with the West End Festival which was celebrating its 21st anniversary. As Belle and Sebastian are celebrating the 20th anniversary of their classic Tigermilk and If You’re Feeling Sinister (nicely referred to as the ‘Red’ album by Stuart) albums, the band set about planning a series of events that culminated in 3 nights at Glasgow University Union Debating Chambers. 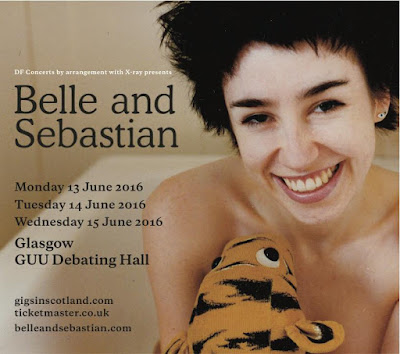 Prior to that we had the Train In Vain punk workout with Stuart, a series of films at the Grosvenor Cinema in Ashton Lane and a Sunday Social event at Oran Mor with some of their favourite local bands.

Last night (Tuesday) was the second of the 3-nights in the stunning yet intimate venue. A band called Life Model were the support and the 3-songs I caught at the end of their set will definitely encourage me to seek them out online and I’d like to catch them again. A 4-piece with 2 boys and 2 girls, they looked the part and sounded scuzzy and old school indie.  Rather nice.

On to the main event though. A string and horn section took to the stage and then the band ambled on and played a short instrumental (F**k This Shit), with Stevie on mouth organ, before Stuart joined them, strapped on a guitar and they were off and into possibly my favourite Belle and Sebastian song - Dirty Dream #2.

The last time I had seen the band live was at the Hydro when Stuart and Stevie were probably 50 feet apart. Here they were almost touching each other and the chemistry was fantastic as they bopped, shimmied and stamped in time to the beats. 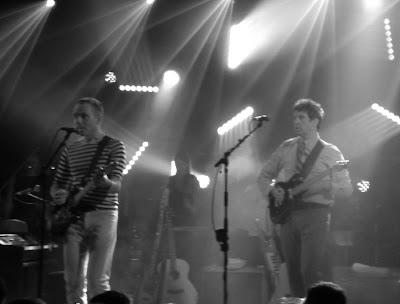 Step Into My Office Baby was even more joyful and playful than it is on record. Beautiful melodies, twists, turns and flows and the band in sensational form with the string section lifting things even higher.

Stuart has an incredible ability to make even the largest venue (Bandstand/Hydro) seem intimate. He didn’t need to reach deep into his bag of (natural) tricks to create intimacy last night, but his between song banter, nods to friends in the audience (including his vicar) and desire to get people up on stage for a couple of songs only heightened the atmosphere. It was friendly, a celebration of his band and it was great fun. 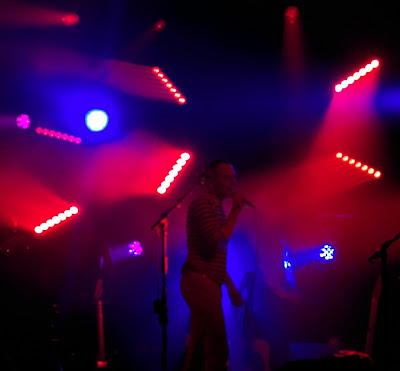 Highlighting the fun aspect was when Stevie and Stuart discussed whether the Glasgow Uni Union or the QM Union had the best laundry. Stevie told of sneaking in to use their laundry by pretending to be a student!

Stevie is my favourite guitar player. He makes it look easy and he makes it look fun. The whole band were in sensational form last night; super tight.

Dog On Wheels was probably my personal highlight of the night. The song has such a beautiful feel to it, a couple of chords, the soaring sing-a-long trumpet, the poetic lyrics and a classic Belles melody.

I’ll be publishing another couple of blogs in the near future on 20-years of Belle and Sebastian, one will be a guest blog by my friend Joanne who is heading down to see the band at one of their Royal Albert shows at the end of the month.

Belle and Sebastian are a truly special band and it was lovely to celebrate their music, from the start to the present, in such a stunning and intimate venue in the West End of Glasgow.