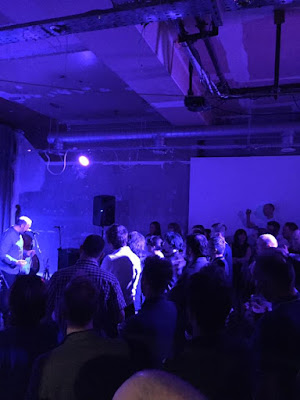 Well..... I’m not quite sure what I was expecting or hoping for from the launch party of Last Night From Glasgow Records last night, but I’ve been buzzing all day and I really don’t think it could have gone any better.

You can read my blog from March on co-founding the label. Rather a lot has happened since then!

Our first four releases are sorted;

TeenCanteen - Say It All With A Kiss, album

We also have acclaimed Scottish photographer Brian Sweeney on board as artistic director. Brian has shot the cover art for the first two releases and is currently editing videos. I’ll be blogging about both as soon as they are ready for release.

We have also surpassed our target of 100 members! We were going to cap it at 100, but the interest levels are high so we’ll review at 125, but will definitely cap at 150 for management and admin purposes! 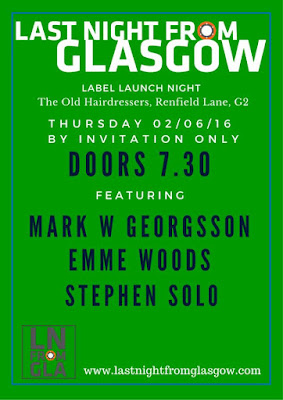 Doors were at half seven on a scorching day in Glasgow. Entry was free, invite only, I did wonder if people would just go to a beer garden or a park, but no, at 7.45pm people started to trickle into the brilliant loft space up the stairs in the Old Hairdressers and we were on.

One of the many magical things about last night was the fact that so many people came on their own. It was a members only night (with the odd guestlist place for friends of the artists). We could manage a few plus ones, but couldn’t accommodate one for every member.

This created a great atmosphere. People were introduced to each other, talked about how they found out about the label, where they were from, their taste in music. It was lovely to watch and be part of.

One girl Kerry told me that she had felt disconnected from the music scene since becoming a Mum almost 3-years ago and joining the label had made her feel part of it again. The six of us who formed the label naturally roped in some friends at first to get things going, but now it is purely organic and growing by word of mouth. So it was brilliant meeting people we had only previously spoken with online and hearing them talk so enthusiastically about our idea and venture.

Ian, Ross, me, Joe, Andy and Stephen - the ‘board’ of LNFG Records

The six of us, Ian, Ross, Stephen (not solo), Andy, Joe and I got up at the start to thank everyone for their faith in us and our idea for the label and then it was on with the show.

Stephen Solo was on first. I’ve known Stephen for 7-years and I had never seen him so nervous. We’re releasing (not officially until August but you can buy it now) an album he recorded on his iPhone6 called Pii. Stephen pretty much made it up as he went along and never intended for it to be released, let alone played live.

So Stephen introduced himself and his worries about his performance. He then promptly sent jaws dropping and spines tingling all over the room with a truly stunning 5-song set. The crowd responded warmly and Stephen delivered. 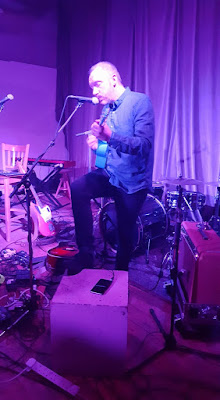 There were many brilliant moments from last night, but one that will live long in the memory was Stephen’s performance of Crying Because (Love Is Everything) which was utterly gorgeous. Backed only by a ukelele and a little bit of effect on his voice, Stephen produced a moment of emotional genius.

Watching people congratulate Stephen afterwards warmed my heart. Hearing that someone told Stephen’s wife Hayley that the £50 membership for the label was worth it just for that performance was incredible.


So I mentioned there were many brilliant moments from last night. Another one was the fact that no-one spoke during songs! Maybe the odd whisper, but you could listen to and enjoy the artists! I’m amazed at going to gigs where people constantly talk through a show.

Next up was young Emme Woods who used to release under the guise of Something, Someone until she recently bought an electric guitar and sent us her first demos.

Morgan (Emme) played her first set with an electric guitar and cleverly created little riffs which she looped to create grooves, delivering a beautiful heartfelt set that again gathered a great response.

Morgan had the confidence to play a song that she had only just written and she also delivered an ABBA cover version (SOS), stripping it back to the bare bones to let you hear the dark lyrics beneath the shiny pop song.

Morgan’s single will be out in July before her headline show at King Tut’s on July 25th. 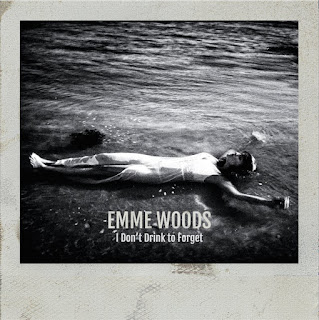 Headlining the show was Mark W Georgsson, our first release OUT TODAY

Prior to Mark coming on, I had the pleasure to say a few words to thank Brian Sweeney who then premiered the video to accompany the single. It is beautiful and I’ll be blogging on the single and the video as soon as it is ready.

Brian also said a few words; highlighting how the label is encouraging artists and creativity. It is a genuine pleasure to have him on board.

Mark had pulled together a 6-piece band to back him. Their soundcheck was wonderful, the band were shit hot and could jam away no problem, creating a brilliant loose country vibe. 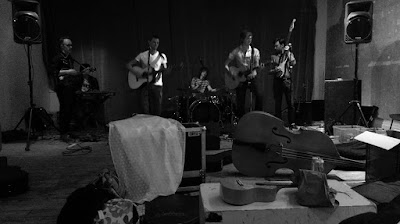 Mark and friends in soundcheck

Tino, Michael and Robbie from The Bar Dogs, Richard and Dave from The Strange Blue Dreams and the gorgeous Katie McArthur to duet on the single.

They looked the part, a double bass for some songs, a violin, Mark and Tino interacting superbly on guitars. And they sounded the part, delivering a set that ranged from beautifully sparse ballads to blistering country rock, with the odd Americana gem in between.

And then there was time for everyone to mingle and chat some more. The support and feedback about the label and the night was pretty mind-blowing.

I've just downloaded iStripper, so I can watch the sexiest virtual strippers on my desktop.