4 dates with The Boss 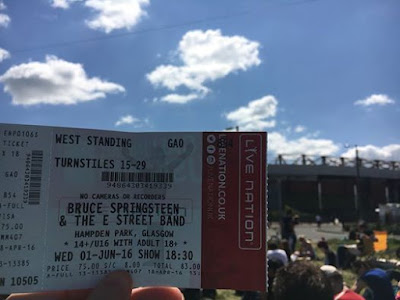 Away back in 2002 I became friends with Ian Pilbeam, a fellow Manchester United supporter and music fan. We signed up to do a trek in the Cederberg Mountains in South Africa for Maggie’s Centres and hit it off in the lead up to, during and after the trek. There were laughs, tears, beers by the campfire at night and lots of chats as we kept each other going. It was a magical and inspirational trip that really led to me changing career to work in the voluntary sector. I’m pleased to say that we are still friends.

Over the last couple of weeks I have been enjoying Ian’s social media posts on his pilgrimage around the UK to catch Bruce Springsteen live on four occasions. So I thought I would ask him to write a blog....and he duly delivered on the train home from London....here it is....

4 shows, 132 songs, 57 different tracks, over 13-hours on stage, Santa Claus Is Coming To Town in May in a rainy Manchester; no-one else does it quite like Bruce Springsteen. That’s why they call him ‘The Boss’ and the four UK dates I was privileged to attend over a magical 11-day period were testimony to the endurance, creativity and sense of occasion of this musical leviathan. 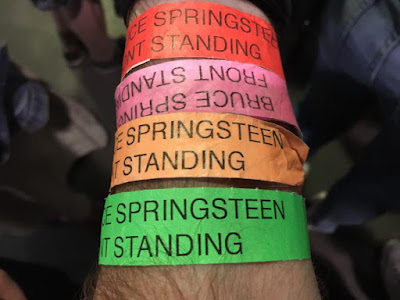 Four years ago I had never seen Springsteen live. I was a fan but for some reason had never got round to it. But the first show was a game changer. I had never seen an artist hold a massive crowd in the palm of his hand for over 3-hours.

Backed by a stellar line-up of musical heavyweights in the legendary E Street Band, with nephew Jake Clemons now wielding the saxophone following the sad passing of his Uncle Clarence, the whole band wind their way through his diverse catalogue, much like a review band, conducted by their inspirational leader.

Be it rock classics such as Born To Run or Because the Night, soul covers like Shout, the gospel tinged City of Ruins, stadium anthems like Badlands and The Rising, or 80’s pop classics such as Dancing In The Dark and Glory Days, this musical legend has quite an armoury to choose from. And he uses it to the full, throwing curve balls a plenty, accepting sign requests for songs and involving the audience all the way through each show. The Boss knows how to party. 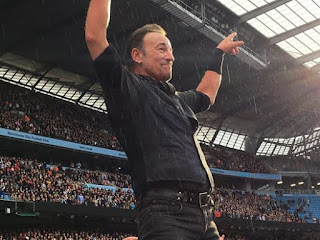 Bruce in the Manchester rain

Springsteen is not afraid to dive deep into his catalogue, starting two of the shows at the piano playing early album tracks unaccompanied and finishing each show with just his guitar, mouth organ and the lusty audience for either This Hard Land or Thunder Road, returning to the folk poet ground that led him to be declared as the future of rock and roll over 40-years ago,

And a word for the band of devoted fans, many of whom have travelled round the world to see him over many years. As a late convert it was a joy to spend so much tome with some wonderful people in the long hours of queuing for the pit. And to share some of the unforgettable on stage moments, brought to an overwhelming crescendo by the majesty of his powerful masterpiece of Jungleland resounding around a sold out Wembley Stadium on the final gig of this UK leg of the River Tour 2016. 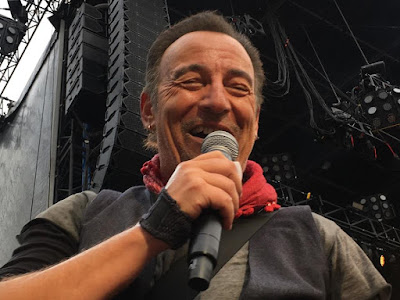 Worth the wait in the queue!

This was preceded by a tribute to the recently passed Mohammed Ali Tougher Than The Rest.

Some might say it is The Boss who is the Greatest and I for one would not disagree.