Neil Young at the Hydro 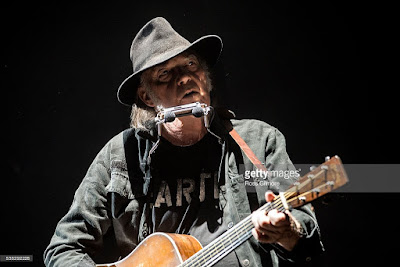 The man in black, photo by Ross Gilmore, Getty Images

Neil Young came into Glasgow last night, backed by his new young band Promise of the Real (who include 2 of Willie Nelson’s sons) and delivered a truly incredible 2.5 hour set.

Anticipation was high in the bars in the Finnieston area of Glasgow that has been transformed by ‘the Hydro effect’. Bars and cafes squeezed tables and chairs on to the pavements of the west end of Argyle Street to make the most of the glorious sunshine, there was a fine selection of Neil Young t-shirts from across the years and I even bumped into some old school friends, one of whom I hadn’t seen in over 20-years!

We could see Neil’s band hanging out behind the Hydro as we walked over the bridge to the venue. Any thoughts of the top tier being closed for the night were banished as the venue was a near sell out to see the maestro play.

Young has always had a close affinity with Glasgow and there was a hushed anticipation as the lights came down, before a spotlight picked out 2 people walking across the stage throwing what looked like chicken feed/corn or something across the floor.

While this was going on we didn’t notice a silent figure, dressed in black, slink to an organ. The spotlight dropped, a new one shone on Neil Young sitting at the organ and he began to play After The Gold Rush. Young changed the lyrics to say look at mother nature on the run in the 21st century, highlighting that the concerns he voiced in the 70’s are even more urgent now.  Much of Young’s new material voices his concerns for the state of the planet.

The audience response was incredible, there were loud cheers when Young played his mouth organ. Young rose from the organ and strapped on an acoustic guitar as he strode to the centre of the stage and then he played one of my favourite songs from his exceptional catalogue - Heart Of Gold.

Mark and I looked at each other in astonishment. What an opening! Mark had been yearning for Young to play some acoustic stuff and he was about to be truly spoiled. We couldn’t have asked for better seats, in the club section, centre stage behind the sounddesk. What a view. 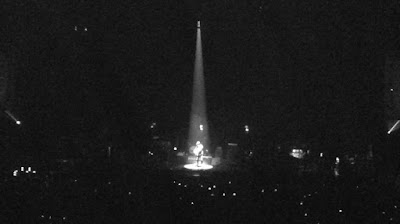 The Needle and the Damage Done was spine tingling, Young looked timeless, dressed in black with his wide brimmed hat pulled down to create shadows, he could have time travelled from the 70’s. The cameras strained to find the light to show his face on the big screens, when it did we were treated to smiles and the sight of an artist in full flight.

The setlist below highlights what an incredible set it was, with lots of material from Harvest.

A near 20-minute version of Down By The River might have blown the roof off an older venue, Young’s band were super tight and super loose, the best kind.

There were 3 electric guitars, creating a beautiful raw and powerful sound, playing with each other, giving each other space and locking in for riffs and grooves. The bass kept it all together, allowing the guitars and drums to really go for it when required, also allowing them to drop out and leave lots of space at others. It was a joy to watch such talented musicians. 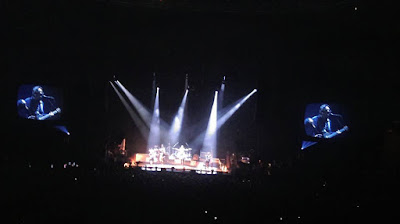 Neil and his band locked in a groove

There were 4 part harmonies that raised the hairs on my arms and sent tingles down my spine. The young band looked so happy to be playing with Neil, the drummer didn’t have a mic to join in the harmonies but cameras caught him singing a-long.

Interviews with Young highlight that his band have learned 100+ songs and that they don’t have a setlist, they just make it up as the go. There was evidence of this as they quickly got together between songs to decide what to play next. They made a mockery of the huge venue ‘Quite a place you got here Glasgow’ by all standing and facing each other at times, just lost in the music, they could have been playing in Sleazys basement given the fact that they were so close together at times - vibing off each other.

Young is 71 in November this year, there are legends that come to Glagsow and you think ‘oh i’d better go and see them, they might not be back’. Young shows no signs of letting up, he continues to release material regularly and his new band seem to have lifted him, he looks strong and full of energy.

The full setlist is noted below. I hope to see Neil and his exceptional band back in Glasgow in the not too distant future.

I travelled down from north Aberdeenshire after my son saw a post on Facebook that a pair of tickets were up for sale by someone local to us, so I bought them, the best purchase I have made for sometime. Neil Young and the Promise of the Real we're just awesome, and I cannot cannon t wait until the 10th June when the travel to Leeds to see "The Big Man" again.

Will be worth the trip again Jerry, last night was amazing. Thanks for reading and for your comment.

Great review Murray, unlike some - see The Telegraph's!
I went with my 18 y.o. son (along with some of my 50 something mates - hard-core Neil fans to a man), and despite only recognising one song (Heart of Gold), he loved it.
Down By The River was monumental!