Didn't Know What I Was In For 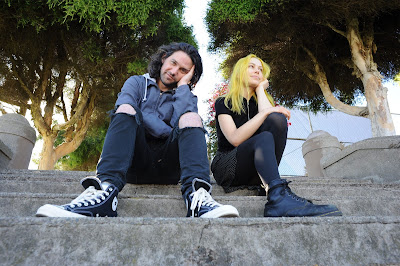 
I'm a little late to the party, but this week I've really fallen for the songs and talent of Phoebe Bridgers.

Bridgers has just released Punisher, her follow up to her 2017 debut Stranger in the Alps. In between times Bridgers formed the band boygenius with Julien Baker and Lucy Dacus, releasing a self-titled 6-song EP on Matador Records. Bridgers also wrote and recorded an album with Conor Oberst under the name Better Oblivion Community Center

I've been blown away by Bridgers, I've not listened to anything other than the releases mentioned above all week. I'll be blogging on her latest album very soon. Probably everything else as well!

In the meantime, I've really fallen for Didn't Know What I Was In For, the opening track on the Better Oblivion Community Center album. I can't recall falling for a song quite so hard in some time.

A warm acoustic strum ushers us in and pretty soon Bridgers voice is weaving its spell. The lyrics tell a tale quite beautifully, the melody feels familiar, it flows so sweetly.

Oberst joins Bridgers on the third verse beginning I didn't know what I was in for, when I signed up for that run followed by the stunning line there's no way I'm curing cancer, but I'll sweat it out.

The songwriting is clever and compelling, the vocals and melody demand you listen (in a nice way), the playing and production are so warm, really capturing something magical.

Trust me - check this song out and everything else Phoebe Bridgers has released. Links to the previous 11 songs featured in the Trust Me series are at the bottom of this blog.

I know the girl who owns a boutique in the city
Selling clothes to the fashionably late
Says she cried at the news but doesn't really
'Cause it's too much fun, it's too much time
And too much plastic money to be made

I didn't know what I was in for
When I laid out in the sun
We get burned for being honest
I've never really done anything, for anyone

To fall asleep I need white noise to distract me
Otherwise I have to listen to me think
Otherwise I pace around, hold my breath, let it out
Sit on the couch and think about
How living's just a promise that I made

1. Something On Your Mind by Karen Dalton
1A. Crimson and Clover by Tommy James and the Shondells
2. I Am, I Said  by Neil Diamond
3. Where's The Playground Susie?   by Glen Campbell
4. If You Could Read My Mind by Gordon Lighfoot
5. Gimme Some Truth by John Lennon
6. Gone With The Wind Is My Love by Rita and the Tiaras
7. In The Year 2525 by Zager and Evans
8. The Music Box by Ruth Copeland
9. The Ship Song by Nick Cave
10. Sometimes by James
11. I Walk The Earth by King Biscuit Time
Posted by everythingflows at 14:56