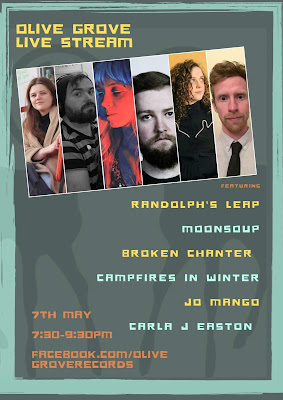 Ahead of a 2-hour live stream from the Olive Grove Records Facebook page tomorrow (7th May) at 7.30pm I thought I would ping label leader Lloyd an email to see how he was getting on.

There has been rather a lot going on in the Olive Grove world, a label benefitting from the monthly Bandcamp days where the site waives its fees; June 5th and July 3rd are the next dates where this is due to happen. This monthly focus is really helping labels and artists in these unprecedented times and music fans are being incredibly supportive.

Be sure to check out Olive Grove via their bandcamp site and also via their website and don't forget to tune in on Facebook on Thursday.

Firstly, how are you doing?

Getting by thanks. Although I think I might have exhausted every conceivable walk from my house.

And how is the label and your roster doing? You seem to have had a busy few weeks with a crowdfunding campaign for one of your artists, the bandcamp sales and Randolph's Leap being prolific ...

We all seem to be doing OK, I've tried to check in with everyone at some point, just to see how they're doing. I'm regularly whatsapping Carla (J Easton), David (Broken Chanter) and Adam (Randolph's Leap). Plus I was on a Zoom call with all of the Leapers a week or so ago, which reminded me how much I miss hanging out with them all.

As you've already alluded to, Pete from Randolph's Leap had the massive misfortune of losing his flat to a fire a few weeks after lockdown kicked in. I can't imagine what it must be like going through that at the best of times, but having it happen during a worldwide pandemic was just horrendous. Thankfully though, both him and his pet hedgehog escaped safely and he had some great friends who took him in and looked after him. Thanks to a crowdfunder organised by a few of us, we managed to raise over £11k for him. Considering we'd hoped to raise a couple of hundred quid, we were all really blown away by the number of people who wanted to help him out. He's a lovely, lovely man, so it was great to see all the message of support. Plus there were loads of folk there to help him with things like clothes and lending him a bike. He seems to be getting back to a form of stability, he's got a flat of his own to stay in. Plus Frida the hedgehog doesn't seem to be traumatised by the whole experience.


As for Adam from Randolph's Leap, that man never fails to amaze me. What with writing and recording not one, but two albums in lockdown, coupled with the numerous brilliant videos he's come up with, it's been brilliant to see just how creative he can be. Plus the reaction he's received has been ace too, he's definitely bee a breath of fresh air over the past couple of weeks. On top of all the stuff he's been sharing publicly, there's also a new full band Randolph's Leap album which has just been finished off. It sounds incredible, it really captures the joy that the band exude. When it might see the light of day is another matter, but when it does arrive into the world, your ears are gonna love it.


Talking of people who are creatively brilliant, Carla J Easton has been doing some amazing things too. The video for her new single Get Lost was all filmed in her flat, but it feels like it was done in a proper big studio. There's also a session track that she's recorded for the Scotsman, which features four of her, which has to be seen to be believed! We are just about to order vinyl for her new album too. We are looking at getting something really pretty made up for it, which I'm quite excited about. 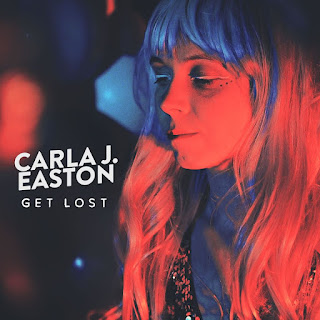 One of the main reasons we are going to be able to do something that bit more special is down to the two days in which Bandcamp waived their fees. The support we received from them has really helped, I think a lot of people are wanting to make sure that wee labels and (DIY/independent) artists can keep going and it's really helped to inspire me to want to keep doing this. So for any of you who bought anything from us recently, thank you, it means the world to me.

How is Olive Grove adapting?

I'm not sure if we are adapting, for me I am working from home and doing homeschooling at the same time, so the label hasn't always been at the forefront of my mind. I guess I am being more reactive to the creativity of others, which has actually been really good for me personally. I don't think like I;be had to drive anything, folk have just been getting on with it and I've been trying to help out when I can. I guess the big difference at the moment, is that it feels like a much more level playing field. It's been great to see everyone wanting to support each other too.


You celebrate your tenth anniversary as a label this year. I guess your plans might have to change?

Yeah we had a few ideas up our sleeves, but that's all been put on hold for now. Doing a live show to celebrate in any capacity seems unlikely, plus being able to release something out of the ordinary will be tough if folk can't get to a studio to record. So if anyone has any suggestions I'd love to hear them :-)

Can you tell us about any release plans for this year?

We have Carla's new single, Get Lost coming at the end of May, with an album to follow at the end of August. We are also going to be rereleasing Woodenbox's first album, the Home and the Wildhunt on vinyl in July. After that I am not sure, if I can shift a few more copies of the Archipelago EP's, then I hope to reinvest that back in doing something else.


And after 10-years, what does the future hold? You seem as passionate and as driven as ever.

I honestly don't know. I don't have as much time to do it as I used to, but I now have loads of great folk on board to help me out. I also have a much better group of peers around me now. Having folk like Neil at Scottish Fiction and Ian at LNG has been great. Having someone who can act as a sounding board, or who just understands what you're going through is invaluable.