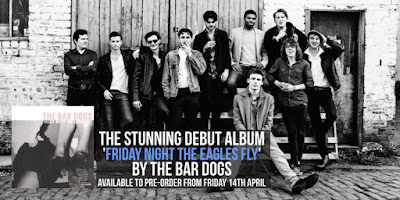 
The Bar Dogs are a young 7-piece rock n roll band who have been tearing around Glasgow since forming in 2015 and this coming weekend they release their debut LP Friday Night The Eagles Fly on Button Up Records.

One of the brilliant things about this record is that it sounds like the band are having real fun, it sounds like they are playing live. It's rock, it's roll, soul, raw, pure and heartfelt. Just look at the picture above, they look like gang that have come together through a love of music....and that really comes across on the LP.

The opening track is ferocious and the pace rarely drops. This is the blue collar rock n roll soul of Springsteen via Glasgow. At under 3-minutes long, Running doesn't hang about, a count of 1-2-3 and the band are flowing from the off with Mario Feraud's saxophone lifting things and John Gerard O'Neill's rasping vocals setting the scene of dead end jobs and dreaming of the weekend. It immediately demanded a second listen as soon as it finished. 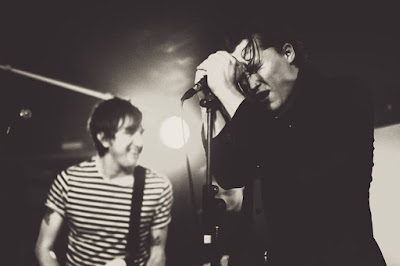 Things slow down for Dream The Night Away, but the gutsy soul is still there and it is at the heart of every song on the album.

Sorry was a single back in March and it is brilliant rock n roll soul. On this kind of form The Bar Dogs sound like the best bar band in Glasgow and one that should consider upping sticks and heading to New York City (or New Jersey) as soon as they can afford the air fares. Having recently read the epic Springsteen autobiography, I think of scenes he describes, playing bars and wanting to generate a reaction. I apologise if I reference Springsteen a few times in this review, but listen to the album and you'll totally see where I am coming from.


Can you keep up the pace? Cause next out of the traps is Heart Shaped Feeling and the band fly through it at breakneck speed. The piano holds it all together but is also allowed to let rip.

And they don't let up - Coco is an absolute belter. The band rip and roar through it, the song flows, the drums pound ferociously.  These guys know how to play and John O'Neill sure knows how to sing his heart out.

Glasgow Saturday Night is crying out to be a future single. Sax and piano give this song a beautiful undercurrent but the beat remains as up temp as ever. The break down for all the girls say and all the boys say section is sublime and then it just all goes gloriously crazy. 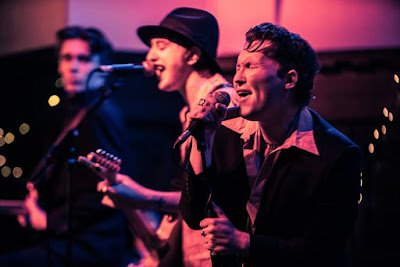 It's not all 100 mph stuff though, just listen to the gorgeous Want You To Want Me complete with Celtic strings and a stunning piano intro.

Did I say heartfelt earlier? Well The Bar Dogs can also be ultra romantic soppy bastards in a lovely way. Just listen to What A Woman for evidence.

A delicate and gorgeous piano riff ushers in the closing track Freedom. O'Neill contemplates life, love, friends, nights out.....and then the song picks up to the kind of rock n roll pace that you'll have grown accustomed to through the course of the album.

Friday Night The Eagles Fly is gutsy, ballsy, 100 mph rock n roll soul. I don't know of any other Glasgow band that can play like this, write like this or sing like this.

The album is out on Record Store Day and the band then have a launch party at the 13th Note on 6th May. If you want a hot, sweaty, loud rock n roll basement show - this is is going to be the hottest one in town. 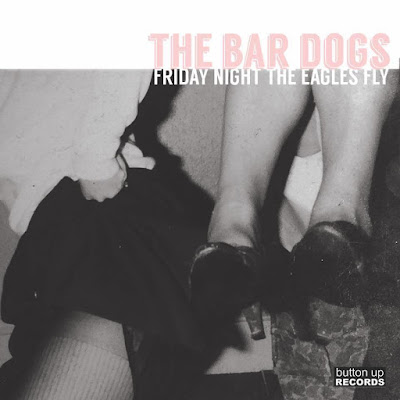