Last night in Glasgow, Last Night From Glasgow Records celebrated our first birthday bash at Stereo in the heart of the city, with performances from BooHooHoo, Medicine Men, Emme Woods and Sister John. The evening was compered by Stephen Solo, we had quality tunes from label DJ Phil Redfearn and creative director Brian Sweeney was on hand to capture the event on film. Label members shared the sense of celebration and everything came together to create an incredibly positive atmosphere. We had done it; 12-months in the bag, a treasure trove of releases and bundles to look forward to.

So much had happened in that time. And now, here we were....

The upstairs bar in Stereo was already busy when I arrived just before 6pm and it was fantastic to see a queue of people snaking down the Stereo stairs for doors opening at 7.30pm. 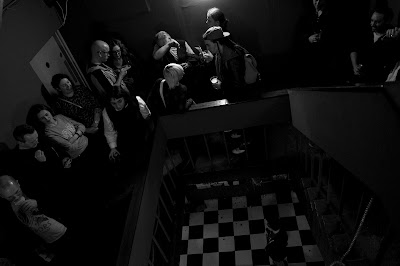 Sister John were signed to the label towards the end of 2016, before we had even seen them play live. I had personally only seen them at the LNFG Xmas bash when they played cover versions. Their demos had really heightened my sense of anticipation and their live set was a joy. Swapping instruments with ease and delivering stunning 3-part harmonies. Amanda McKeown has a voice that can swoop and soar, one that can send shivers down your spine and one that can warm your heart. Come and check them out at the Old Hairdressers on Sunday 23rd April. 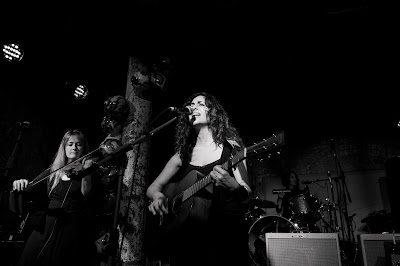 
Emme Woods has been with the label almost from the start, watching her develop has been a joy. A conversation with guitarist Jamie Logie revealed that Morgan (Emme) has songs pouring out of her and plans for a mini-album have changed to a full album. I think of catching Emme for the first time at our launch party last June, she had barely picked up an electric guitar before. Now her cheekier grin is even cheekier, she has a swing and swagger when she plays, her voice has grown stronger, her songs are richer, playful, soulful, imaginative and confident. Emme has 2 big showcase shows coming up in the near future at Wide Days in Edinburgh and the Great Escape in June. Watch this bird soar. Her set last night was a delight, the confidence to throw in You Really Got A Hold On Me spoke volumes and recent digital single I've Been Running was even better live, the key change to the chorus with stabbing horns was uplifting and delightful. 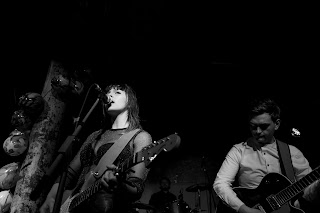 
Next up were Medicine Men, led by the charismatic Ian McKinnon. Opening with Show What You're Made Of set the tone for the rest of a ferociously energetic set. Sleeping With The Light On had a real groove, Bruised Peach was delivered with fire with McKinnon hammering home the fall in love again, fall in love again refrain, while Eggshells was simply stunning, a beautifully written song with a strong melody and one that just builds and builds. Set closer Out Of The Light was a triumph blending Chemical Brothers with Primal Scream, it was great to look around the room and see heads nodding approvingly. Medicine Men's debut album is officially out in May, but look out for something on Record Store Day. 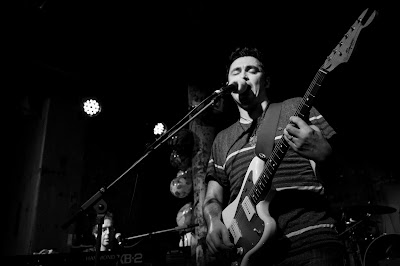 
It was Boo Hoo Hoo who headlined, bringing their infectious electro art pop to Stereo and getting people dancing like it was 1989. They are armed with more hooks than Rocky, they have fun on stage and off and their album is going to rammed with glorious pop music. The bass on Mould Me almost demands a dance,  Fire was sensational and Dreams Tonight was a euphoric delight, the bit where the synth kicks in to lift the song even higher is incredible. At the end they got one of their energetic friends to come down by the stage and dance along and it just lifted the feel good atmosphere even higher. 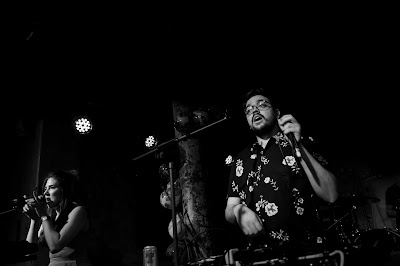 There was just time for Stephen Solo to come on at the end to play what has become the labels anthem - Crying Because. This tender beauty was sung with heart and soul, you could have heard a pin drop and the closing refrain Love Is Everything is one that we proudly have emblazoned on the sleeve of our new LNFG t-shirts, designed by 8-year old Levon Smith. 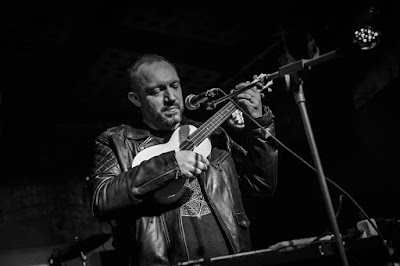