Derek Watson of The Banter Thiefs has organised a brand new music festival to promote the best local musicians as well as some of Scotland's raft of emerging talent.

The festival launched last night, using a number of venues across Derek's home town of Motherwell and continues tonight (Saturday) and tomorrow. The Electric Bar and Jack Daniels are the main hosts before the festival moves to Starka and the Railway Tavern on Sunday.

Derek's worked exceptionally hard to pull a multiple venue, 3-night festival together and my good friend Gordon Phipps headed along to check it out last night and he discovered his new favourite young band. 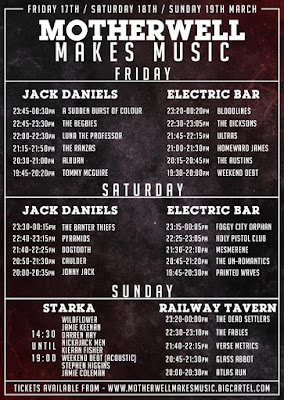 I Headed along to the first Motherwell Makes Music festival held over a couple of venues in the town this weekend. The first act I seen when I got there was the closing song of Tommy McGuire who performed a nice cover of Fleetwood Mac’s The Chain utilising a loop pedal to play the main riff while he played the lead part beautifully on an acoustic guitar.

Next up were Alburn who turned the volume up way past 11! The grunge/punk/hardcore quartet performed a few songs from their upcoming debut album. Every song was delivered with venom and passion and seemed louder than the last! Keep your eyes out for their debut album which will be released on 7th April.

The Ranzas had travelled all the way from Ayr to play the festival and treated the crowd to some infectious indie tuneage. Backed by a few fans they had brought through the band treated the crowd to an infectious set of indie pop tunes. Singer Lyle Kennedy looked like a young Kyle Falconer in his impressive jacket and he had a voice to match. Bass player Murray Brough had bass lines reminiscent of Flea and the Chilli Peppers. All round a good show from the boys from the seaside town.

I knew the next band were from Wishaw which obviously had me sitting up in my seat ready to see what they had to offer and holy fuck they did not disappoint! Luna The Professor absolutely blew me away! This band are only 16-18 and played better than most bands I’ve seen at double their age! They opened up with a blistering track and then followed up with brand new song Tonight which is a future dance floor smash with its catchy hook laden crescendo of a chorus! And the hits continued at a frenetic pace each song as good as anything I’ve heard on the radio recently. They’re understanding of vocal harmony at such a young age is incredible and leads to some beautiful moments between singer/guitarist Johnny Irwin and bass player Dave Mcnally. Defintely a band to watch out for! 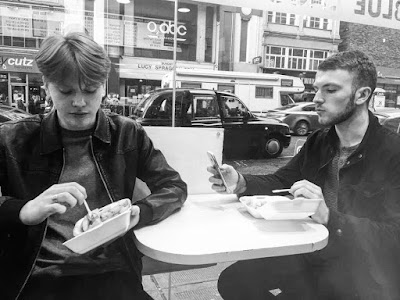 Finally a band I am very familiar with having seen them a number of times over the years was The Begbies. I may have seen them a few times but they seem to be ever changing and maturing and the addition of the two saxophone players was a genius decision that really sets them apart. Kicking off with the brilliant single Sleeping Dogs Singer Gary led the band through a set of their own brand of skindie (ska/indie) hits. Other recent single Stay Young, Stay Free sounded tremendous as did they’re older stuff including one of my favourites Ashleigh. They are sure to be festival favourites this summer and should have a 5 track EP out later this year so keep an eye out for it!

Last but not least was a band of incredible musicians called A Sudden Burst of Colour. This instrumental band attracted the biggest crowd of the night and were reminiscent of Pink Floyd in parts.  The band played some beautiful music and equally bounced off each other musically. I never thought a band with no singer could hold the attention of a Friday night pub crowd but it’s a massive credit to the band’s talent and song craft that every one in their stayed to the end and seemed to be in some sort of transcendental grip of the band.

Amazing night of music all round and amazing night for the local music scene. Let’s hope to see more of this in the future!
Posted by everythingflows at 13:51