Runaway by The Velveteen Saints

I've blogged about the Velveteen Saints a few times over the last year; they are one of the young Scottish bands on the current scene that get me excited - looking good, sounding good and growing in confidence.

They've just finished a European and UK tour with The View. Last month they released a video for their glorious fuzzy electric guitar pop song 'Runaway'.

'Runaway' lodged in my head on first listen as I recognised it from some live shows; the verses are simple and catchy, the chorus arrives quickly and there is a fuzzy guitar solo. The video is grainy black and white footage of the band in the studio, playing the legendary King Tut's Wah Wah Hut and shots from around Glasgow and some old pictures.

I've mentioned Jesus and Marychain before when I've written about the band and when you check the song and video you'll understand why. Velveteen Saints know how to write a brilliant guitar pop song. Check it out. 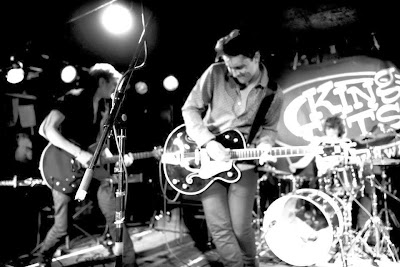