Last night was a joy. Edwyn Collins played an intimate show at Mono in Glasgow, we were just a few rows from the front and got to witness one of Scotland's finest at close hand.

London Mississippi were the main support act, with Edwyn's young son Will playing bass. The 3-piece played well, delivering a high energy set of guitar power-pop with loads of soul and attitude. Dropping in a bit of Whitney Houston's 'I Wanna Dance With Somebody' towards the end of their set. A song that may or may not be titled 'Stay' was a real highlight.

Mono is one of my favourite venues (indeed places) in Glasgow. Tucked neatly out of the way but still within walking/stumbling distance of trains and the city centre, it has a unique vibe, laid back to the max, fiercely independent, supporting the arts and it has a great record shop to boot.

I didn't need any proof that Mono represented an intimate show, but evidence presented itself to me when I nipped to the loo just before Edwyn was due on and found myself taking a pee just along from the great man! There are no backstage areas at Mono!

I can't remember the exact setlist order, but here is what went on.

We had tucked ourselves in three rows from the front, so we had an excellent view. Edwyn's band took to the stage before he came on stage to a huge ovation. Sitting on an amp he introduced the opening song - 'Falling and Laughing', his debut single with Orange Juice, released away back in 1980. As openers go, this was up there and it set the tone for a wonderful set that drew from his extensive back catalogue and this years fantastic 'Understated' album.

Edwyn introduced his band who were absolutely sensational from the off. 'Dilemma', '31-years', 'Understated' and a gorgeous 'Forsooth' from the current LP all slotted in with ease next to songs that Edwyn has been singing for over 30-years.

'What Presence', 'Felicity' and 'Blue Boy' thrilled the crowd and Edwyn looked just as pleased and happy to be singing them. 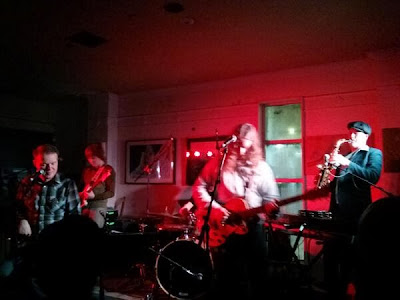 There were a number of times throughout the show when I reflected on Edwyn's lyrics - very positive but also reflective on life and death, even the early stuff. I guess they take on a new perspective following his brain haemorrhage in 2005. This was a life affirming gig in more ways than one, there was such warmth in the room.

There were some emotional moments when Edwyn rose to his feet and tried to move his microphone up on the stand but needed his tour manager to help. Even more so in the encore when he tried to do this with his mouth, lost in the moment of the music.

'Losing Sleep' was brilliant, a pounding Motown drum and a song that just seems like one long chorus. 'Ghost Of A Chance' flowed superbly, highlighting the brilliance of the band and the genius of a songwriter that Collins is.

'Rip It Up' was a buzz, I took the time to look around the room and everyone was grinning and dancing along. It has to be one of the best pop songs ever produced by a Scottish artist, if not the best. It was then followed with 'A Girl Like You', the searing guitar sounded incredible.

Edwyn came back on and announced that although he was born in Edinburgh he was home again, playing a lovely version of 'Home Again' back by acoustic guitar and keys.

'Don't Shilly Shally' sent the crowd out into the winter night with huge smiles on their faces. This was a stunning show from an exceptional artist. The added bonus is that I get to do it all again at the re-opening of the Glasgow School Of Art in the new year.
Posted by everythingflows at 14:46