On Saturday night Lynn and I ventured into Faktory in Byres Road to see the relaunch of Flash Talk, one of the most promising new bands on the Scottish music scene.

The band had issued some teasers in early 2013, posting a couple of DIY videos that ripped scenes from classic films to tie in with their widescreen cinematic sounds. They then disappeared as quickly as they arrived, bunkering down to record an album so they were ready to fly when they launch for real in 2014.

The 5-piece opened with the incredible 'Synthesise', which, as the title might suggest, is full of huge synths and also the best guitar riffs I've heard in a while. The band are impeccably tight, yet loose with it.

'Synthesise, when I'm feeling down you sympathise'

The song breaks down beautifully at the end and there are some 3-piece harmonies for the section. 'Woah-oh, every time you touch me' section.

'Automatic' follows and takes influences from Bowie through to Kraftwerk. There is another killer breakdown towards the end.

'Miracle' slows things down, all moody synths, allowing the singers stunning vocals to take centre stage. The 3-piece harmonies lift the song along with huge synths for the chorus.

The 5-piece (vocals, guitar, bass, synths and drums) play other songs that they don't introduce. One contains a section 'everybody light a fuse' and is pure brilliance. There are glances of recognition among the people in the room that they you don't come across a band like this very often. 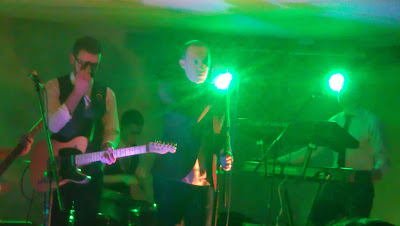 'Land Of The Lost Cause' sears and soars. Singer Stephen Farrell has a voice that you don't get to experience very often - capable of delicate whispers, strong enough to take songs and melodies to exceptional levels.

Hooks, soaring choruses, stunning breakdowns and exceptional musicianship -keep an eye out for Flash Talk in 2014.
Posted by everythingflows at 03:38