I recently discovered a small independent/DIY label in Glasgow going by the name of Mecca Holding Co with the slogan 'the plan is, there is no plan.'


The small label is run by Warren McIntyre who also has a band The Starry Skies. My sister recently gave me a loan of his bands debut album alongside one by Roy Moller who has also released an album on Mecca (to be reviewed later).


'Ask The Animals' mixes garage, psychedelia, punk and guitar pop to excellent effect. The band are clearly tight and Warren must have an excellent record collection to delve into for influences. 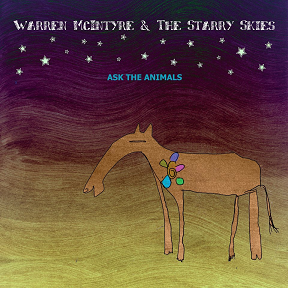 The opener and title track mixes garage and psychedelia with hints of Love coming through at times, especially when the trumpet kicks in.

'Baby you've gotta know, nothing can kill a dream, watch the empire burst at the seams'

'Let Love Come Back To You' is my favourite song from the album. Warren's voice sounds a little tender, the groove is completely different from the first song; the hooks are clearer, it is a great pop song. The trumpet appears again, lifting the song at all the right places along with some chiming guitars.


'Disappearing Darkness' slows things down and there is some gorgeous work on the steel guitar from the start. The backing vocals on this are glorious, the perfect combination of country and gospel.

I wonder where you are tonight, as I sit here under the electric light,
With the shades drawn to stop the daylight from getting through
Let it through, let it through

'How Many' comes across as a loose jam before 'Time Alone' kicks in with fuzz toned guitar, rediscovering the country vibe from 'Disappearing Darkness'. The arrangement on the backing vocals is fantastic again.


'Now Comes Autumn' is another fave of mine from the album. The feeling in the playing, production and hushed vocals makes it a real stand out and yet again the backing vocals are stunning. Warren has a real knack for arrangement and his guitar solo is beautiful leading into the most stunning part of the album, everything slows down...

Now comes Autumn, I remember
A thousand words I could, never tell her
So many pictures that have faded
Now things seem less complicated

It is one of the most beautiful songs I have heard in a long time. Check out the video below.


'Through The Black' picks up the pace considerably with a driving beat, soaring trumpets, and again their are echoes of Love, particularly with the trumpet solo and searing guitar before the final chorus.


'Catapults' has a weird shuffling military style beat and feels a little out of tune with the rest of the album.


'Secrets' is garage punk, exploding into life with a brilliant riff and Warren stirs his melting pot of influences with psych guitar and some gospel style vocals aiding the chorus and hooks; one which is pretty apt at this moment in time for bankers and politicians everywhere.

Closer 'For The Dark Is But A Star' reminds me of the Polyphonic Spree? That kind of soulful vocal mixed with loads of backing singers. Unfortunately I didn't get to the bands album launch at Stereo a couple of weeks ago but I look forward to hearing this live some time soon.


A good end to the album which displays some real stand out tracks and I would certainly recommend checking it out. You can preview some of the songs via their soundcloud page.