Their songs incorporate sunshine pop, girl-group harmonies and multi-melodies and last week they played their debut gig as a full band at Henry’s Cellar Bar in Edinburgh, having previously road tested a few songs at a few open mic nights and Art events across the city. 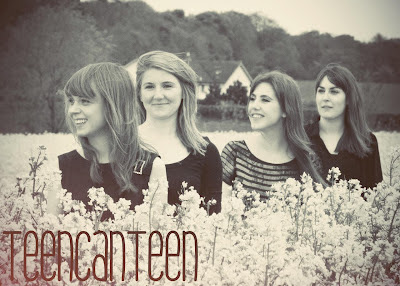 TeenCanteen formed out of the ashes of Futuristic RetroChampions and like the Retro Champs they are split between Edinburgh and Glasgow with Carla Easton who wrote the FRC songs and played keyboards adding lead vocals to her repertoire in her new band and Sita Pieraccini going from lead vocals to playing bass (which she had never played before) and backing Carla on harmonies.
Carla and Sita are joined by their friend Emma Kullander on guitar and vocals and Carla’s best friend since High School, Deborah Smith on drums.
After managing Futuristic Retro Champions I have made a conscious decision not to manage my sisters new band and it has been pleasing to watch them develop so quickly since the four got together for their first practice session. I think they had 6 practice sessions before booking some studio time at 45-a-side records in May with money left over from FRC’s and they spent it well, recording 4-tracks in 2-days and taking 3rd day to mix and master.
TeenCanteen is a much more organic sound than FRC’s. The fact that Sita had never played bass before and that this is Emma and Deborah’s first band (both had never been in a studio) just adds to the sense of innocence and a welcome rawness (so much music is just too polished these days) on the recordings that should be released in late summer. The EP also features guest appearances by Eugene Kelly (Vaselines/Eugenius) on guitar and backing vocals, Duglas T Stewart (BMX Bandits) on vocals, Roy Moller on guitar and Daniel Wilcox on violin.
Anyway, you can watch a short 4-minute film about the recording of the EP over on their vimeo channel at www.vimeo.com/teencanteen
Lets get on to the live show; 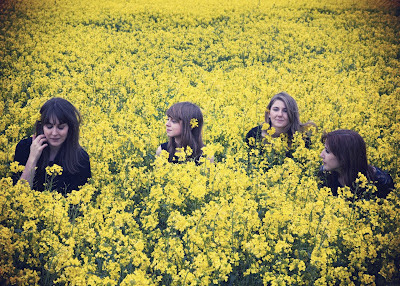 People piled into Henry’s from 7pm, aware that TeenCanteen were on at 8pm. There were plenty of familiar faces from the FRC days and a good few new faces as well which was nice to see.
The girls shy humour shone through from the offset and it was smiles all round as they went into the opener 'You're So Analogue', the tale of a girl who is up to date with her Social Media falling for a guy who is more into his books.


'I think that you're so analogue, because you don't even write a blog'
and
'I log on 15 times a week, but you never show in my news feed.'
'One More Night' continued the good vibes before ‘How We Met (Cherry Pie)’ which was a real stand out, the chorus flows better than any I have heard for a long time;
Like rain that falls without a warning, on a sunny morning, this is how we met
Like sugar in my cup of coffee, apples dipped in toffee, this is how we met
Like snowfall showing in the summer, with massive claps of thunder, this is how we met
Like missing puzzle pieces meeting, with joys of seasons greetings, this is how we met
'Atlas' talked of falling in love and running off to visit the Star Wars set in Tunisia, yet also being happy just going camping in Scotland. The flowing vocal melodies are probably going to become a bit of a trademark for TeenCanteen. 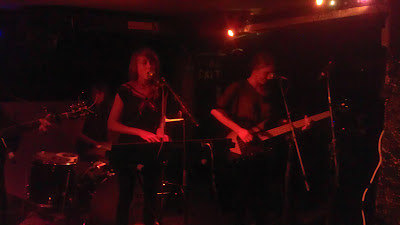 'Fireworks' is one of the first songs that Carla wrote for her new project and it has already been recorded by the BMX Bandits for their forthcoming album. The TeenCanteen live version was very different with Deborah abandoning her drums to share a mic with Emma for excellent 4-piece harmonies.  Duglas T Stewart was in the crowd and he joined in with a kazoo solo at the end.

Emma then took over lead vocals for the verses of 'It Could Be Beautiful' before all 4-girls came in with the catchy chorus;

Go on an say you'll be my man, you know I'm willing and I can

Before Carla surprised everyone in the crowd with a Scottish rap that referenced Katie Perry and contained the line;

'Don't you wait an hour before you text me back,
cause that is so High School and I am so over that
'Under My Cover' was the last song of the night with BMX Bandit Duglas T Stewart called up to the stage to guest on vocals. Duglas also sings on the recorded version. It was all endearingly ramshackle with Duglas looking genuinely moved at the opening lyrics;
Sometimes I need to realise, the reason why I'm alive, maybe I could be special
You can find a VERY lofi demo version of the song at www.soundcloud.com/teencanteen
That was that, the band had no more songs and had to politely refuse the audiences attempts for an encore. That was until the host for the evenings entertainment Lach (a beat poet from NYC and legend of the antifolk movement - involved in the first releases by the likes of Beck and the Moldy Peaches) asked if there was any way they could play one more.
As the band were clearing up around her Carla played some warm chords on the keyboard a few times and then started singing...it was a lofi cover of Kylie's 'All My Lovers' and it was genius. Sita joined in on backing vocals and tambourine and the other girls also joined in when they knew the words. Lach got up behind them and got the crowd clapping along. They somehow pulled it off, transforming an electro pop song into a total lofi heartburner. A great moment. I hope they go on to record a version. 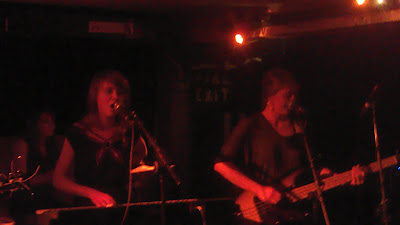 I look forward to the bands first release and some future gigs, they already have some festival appearances lined up.
Posted by everythingflows at 04:09

This all sounds very exciting! I've recently fallen in love with "BMX Bandits in Space" and my research into the origin of the wonderful song from that album "Fireworks" has brought me here.

I'd love to hear the TeenCanteen EP, is it still available and if so, do you know how a Bristol based enthusiast could get hold of it?