What goes on in Amsterdam stays in Amsterdam. A phrase uttered by many over the years and seemingly one that the Stone Roses are sticking to as well. If there was a fall out between Ian and Reni at the end, causing them not to come back on to play traditional closer ‘I Am The Resurrection’, then it is staying in-house; good management!
Anyway, I had waited 21-years to see the Roses. I reckon it was 1991 when I first fell in love with them. When my friend Lynne who lives in Amsterdam called me 6-weeks ago to say she had two spare tickets for the show then it just felt like destiny. Flights were duly booked (as were babysitters) and my wife and I set out for 2-days/1-night in the ‘dam.
I have never been so excited about a concert. Our flight from Glasgow at 9am on the day of the concert contained a fair few fellow Roses fans. We checked into our hotel early, got a power nap and then heaed into town to meet Lynne and her friend Cooper, who had flown out the night before. Lynne told us of reports that Mani had been ‘in the area’ the night before drinking a Babysham mixed with Jaggermeister! We had a few beers and headed to Lynne’s flat which is pretty central, meeting he boyfriend Dave who has exceptional taste in music as we chilled out Amsterdam style. I was still hyper though!
We caught a tram and a train to the venue. Amazingly it wasn’t sold out and the touts were getting stung big style outside with the £60 tickets going for half that price. We got in and were greeted by the merch stall where I got a limited edition print of the concert poster and we stored that and our jackets in lockers – very modern/American High School. 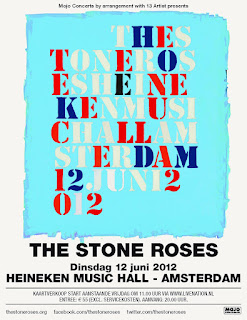 With drinks bought (using a token system) we entered the venue and enjoyed some brilliant songs in the build up to the Roses entrance; Voodo Ray by A Guy Called Gerald, some classic soul and ska, Strings of Life and then Stoned Love by The Supremes (rather appropriate for Amsterdam)........enter the Stone Roses. We were down near the front stage right (Squire's side).
They bounded on to stage, full of energy and excitement, sharing feelings and emotions with the crowd. Adored kicked things off, the classic rumbling bass from Mani, some high-hat action from Reni who seemed to be sporting dreadlocks under his bandana, it all kicked off and any worries about Ian Brown’s voice were out to rest as he started;
‘I don’t have to sell my soul, he’s already in me.....I wanna be adored’.
The crowd sang along in lusty unison, smiles broke out on stage and off. The band looked great, Squire in a vintage blazer, Ian started with a hoody which he quickly lost, Mani was in a funky 60's style shirt and Reni in a Brazil 70 style Roses top with a lemon as the badge and Roses 12 on the back - potentially the most popular item at the merch stall. 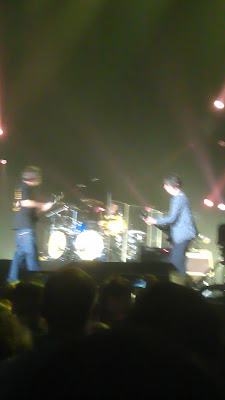 Sally Cinnamon kicked in, the classic riff was sung along, Brown swaggered around the stage from left to right, Squire turned to face Reni, the band looked tight. The closing section 'then I put the letter back' flowed superbly.
'Sent to me from heaven, Sally Cinnamon, you are my world'.
There was more chiming guitar pop perfection to come in the shape of Mersey Paradise that caused a mass outbreak of dancing and pogo-ing, I could barely believe my eyes and had to stop myself singing at times so I could listen to everything. Squire was coaxing extra little riffs out of his guitar and was on fire throughout.
Ian asked who was from Amsterdam to a little cheer, then who is from anywhere else to a huge cheer.
Sugar Spun Sister slowed things down just enough for us all to catch our breath before a gorgeous Where Angels Play before the most astonishing run of songs I have ever experienced in my 19-years of gig-going.
It started off with the cool shimmy of Shoot You Down, Brown's voice mixed with Reni on harmonies superbly, it was a joy to my ears, something I thought I would never hear or see live and certainly not 10 rows from the front (I'd get even closer near the end). The closing section just highlighted (for me anyway) the band at their best, flowing effortlessly, gelling together.
Now this time has come, it'll all work out
And when this thing is done, it'll leave no doubt
And when you've had your fun, will you all walk out?
I'd love to do it and you know you've always had it coming
It was sheer brilliance and it didn't stop as Mani and Reni started to jam, allowing Squire to change guitar and after a couple of minutes the jam went into Fools Gold, queue a load of Bez dancing all around me. It went on for ages, this was the 12-inch version x 2, or so it seemed, band and crowd lost in a moment of stone cold funk.
The funky jam continued as the band played a delicious full band version of Tightrope, a personal favourite of mine.
Are we etched in stone or just scratched in the sand, waiting for the waves to come and reclaim the land?
The band were showing off now as they kicked into Ten Storey Love Song, that glorious chiming intro soared towards the heavens and....well I cried, tears of sheer joy mixed with disbelief and smiles as Ian came in;
When your heart is black and broken and you need a helping hand
When you're so much in love you don't know just how much you can stand
The Roses are back, the best band in the world, my favourite band of all time and my heart was beating in time, full of love and happiness. This was a special moment for me.
They went straight into Waterfall and it sounded like it did in my dreams, Squire coaxing loads of riffs at the end and Mani and Reni locked in a groove, that brilliant little bass line, Reni all over his kit and even twirling his drum sticks at times, the groove went on and segued into Don't Stop, an unexpected bonus. This was a band full of confidence already, only their 4th show back and they were pulling off things like this with ease. 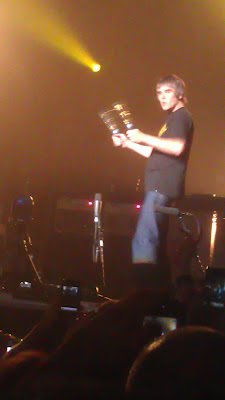 Then came my personal highlight from the night; This Is The One in all its technicolour glory, it truly sounded magnificent and lifted things even higher causing me to grab my wife by the hand and lead her into the centre, a mere 3 rows from the front. We were bouncing, pogo-ing, hugging stangers, this was real music to my ears, this was the one, the one that we had all been waiting for, some for years. Even now as I type I am getting tingles at the memory of how good this sounded and how lost in the moment we were.
Then it was the sheer pop rush of She Bangs The Drums, Mani firing the bass intro down our throats at top speed as Reni and Squire came crashing in to lead us on a glorious 3-minute pop trip.
.....there are no words, to describe the way I feel
The stunning run of songs continued with Made of Stone, Brown looking every inch the King Monkey, stolling around the stage, Squire the guitar god coaxing extra riffs and sounds out of his guitar, Mani grinning from ear to ear and Reni holding it all together. The place was bouncing for the chorus.
Sometimes I fantasise when the streets are cold and lonely...
Then it was into Love Spreads, a funkier work out with the mantra hammered home.
And then........well at the end Mani, Brown and Squire all hugged but Reni seemed to disappear. There were a few chants for an encore but most people just stood back in awe at what they had just seen and heard and expected the Roses to come straight back on, or they were too stoned to cheer.
Ian did come on and said 'the drummers gone home, I'm not kidding, the drummers gone home'. I thought this was an attempt to get the crowd to cheer more for an encore. I didn't hear it at the time as I was trying to get a chant going but he then steps back to the mic as the crowd are boo-ing and says 'get it all out, the drummers a c*nt'.
So there was no epic finale of 'I Am The Resurrection'. It would have been the cherry on the icing on the cake. I was disappointed for about 5-minutes and then we caught back up with Lynne, Dave and Cooper and just talked about how brilliant it had been and how happy we were.
The next day Lynne and I bumped into Mani and Ian in town. Ian asked me what I thought of the gig and I just said 'it was amazing, totally amazing' and he grinned. I had overheard a conversation with a guy Ian had been speaking to prior to me and Ian said (with a smile) 'Oh glad you enjoyed it, it might have been our last gig.' Mani looked like he had been enjoying the nightlife and after posing for pics the two went back off to their hotel. 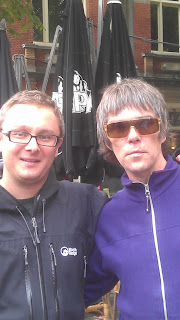 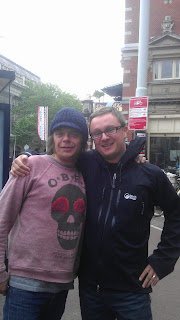 Roll on Heaton Park but that gig takes a huge pressure off for me, I could be miles back at Heaton Park, at Amsterdam I lived out a dream and finally saw my favourite band and they were on fire.

Tulips from Amstedam? Not for me, I'll take the Roses any day of the week! ;-)
Posted by everythingflows at 09:11

Thanks for reviewing the show...i was on cloud 9 the whole time as well. Wife and I flew in from California, couldn't miss seeing the Roses. The show was just amazing, band were incredible. Can't wait to see them again. Should have a pint sometime if you fancy coming out to the USA in 2013 for some shows. :)

Forgot to ask, where were the band staying or where did you meet up with them? Was trying to find them! We stayed by Museumplein.

Did you know that you can generate dollars by locking premium pages of your blog / website?
Simply join AdWorkMedia and embed their content locking plug-in.