Paul McCartney turned 70 today. I was somewhat surprised, it only seems like last year I was singing 'When I'm 64' when he turned 64.

I don’t know why I am surprised, maybe it is because Macca retains such youthful enthusiasm and energy, or maybe it is because of the music, footage and pictures from his younger days that cause him to remain that age in my mind whenever I hear his name. 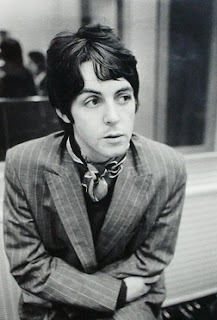 I thought I would scan through Sir Paul's discography and select 10 of my favourite Macca tunes (Beatles era). It was very hard to keep to 10 so I have listed some Bonus Tracks below.
This isn’t in any kind of order other than this song. It is almost like northern soul, the driving beat, the horns, the yearning excited vocal…the song flows superbly, I don’t DJ much these days but I always drop this one in when I do, just brilliant.

The ‘Let It Be’ album has McCartney stamped all over it. Truth be told, post-Revolver and the death of Brian Epstein, it was Macca who held The Beatles together and kept them going. Pepper, Magical Mystery Tour, Yellow Submarine, the White album, Let It Be and the song cycle on side-2 of Abbey Road were all his ideas. While Harrison stock-piled songs for All Things Must Pass and Lennon blissed out in an acid and then heroin coma with Yoko, Macca was on fire.
The reason this song is one of my favourites is because I remember buying the album on cassette as a young teenager from Impulse in Hamilton and driving back to Carluke with my Mum. I always think of that journey when I hear the song and the song itself is brilliant. Lennon and McCartney harmonising and a typically brilliant middle-eight ‘you and I have memories, longer than the road that stretches out ahead…’

From the Beatles For Sale album that has one of the best album covers of all time, The Beatles with their pristine mop tops looking all serious. The gentle acoustic song allows McCartney to show off his full repertoire of tricks; hooks, melodies, another cracking middle-eight ‘and now the time has come and so my love I must go….’
I always think of The Beatles footage from their time in Miami when I hear this thanks to the Anthology,

Macca’s song for Julian Lennon. Quintessential McCartney. This performance from the Davie Frost show is stunning.

Up alongside Got To Get You Into My Life (and also from the Revolver album) as a real fave of mine, this is McCartney’s songwriting at its best.

I fell in love with this song (and indeed that incredible song cycle from side 2 of Abbey Road) from the moment I heard it. The song became a particular favourite of mine and my great friend Reddy for the ‘out of college money spent, see no future, pay no rent’ section as that described Reddy to a T at that time. Macca at his best with his use of melody and the ‘oh that magic feeling’ refrain is surely an all time best?

Listening back to this makes me a think that it is a real ‘Lennon’ song in terms of raw guitar and vocals. It flows along at 100 mph with McCartney barely having time to get his breath before launching into the next verse. Stunning and his songwriting seemed to step up a notch thereafter.

My karaoke tune! Off the first album and a straight up rocker yet still stamped with McCartney all over it. I love the section ‘well my heart went boom as I crossed that room, and I held her hand in miiiiiiiinnneee’. We’ve all been there, love at first sight and that feeling of ‘I’ll never dance with another’.

From A Hard Days Night, the chords and melody are quite dark, a real departure from the merseybeat sound that caused screaming hoards to chase them in the film. Another sign of progress in McCartney’s songwriting. Genius at work!

Another from A Hard Days Night and one that really stuck with me when I first heard it. I remember having conversations with fellow music fans at school about the film and this song in particular, one that Martin Callan who played bass enthused about. The lyrics flow yet they also rise and fall, incredible songwriting.


BONUS TRACKS
Other honourable mentions; I’ve Just Seen A Face, Mother Nature’s Son, I Saw Her Standing There, I Will, Get Back, She Came In Through The Bathroom Window, All My Loving, Here There & Everywhere, I’m Down and The End.
And think of the ones that I have missed!
Posted by everythingflows at 06:55