Last night I went down to one of my favourite venues to witness one of my favourite artists celebrate the forthcoming release of their album ‘Light of the North’. The venue was Mono and the artist in question is the supremely talented MiaouxMiaoux, someone whom I have written about many times on this blog and I also had the pleasure of working with him for a while.
Miaoux Miaoux is essentially Julian Corrie, but he has a growing number of people helping him – Kris Fergusson on bass duties, Paul Carlin on drums and guest vocals from Anna Miles and the exceptionally cool Profisee, not to mention the backing of the seminal record label Chemikal Underground releasing his music.
The album is already picking up fantastic reviews and I really hope that as the reviews and word of mouth recommendations grow, then Miaoux Miaoux will go on to be recognised and appreciated as one of the best artists in the UK; songwriting, singing, production, guitar, synths, bass, drums, remixes…..this boy has the lot and it is beautifully packaged in his debut for Chemikal.
I arrived through the drizzle just as the recently reformed Mitchell Museumwere finishing their last song – not good! Between song music was supplied by Auntie Flo and the excellent line-up was further complimented by ConqueringAnimal Sound, long terms friends with Miaoux Miaoux and currently on the shortlist for the SAY Award with their sublime album ‘Kammerspiel’, although I would say that to fully appreciate their talents and music then you really should take the time to catch the live.
Jamie and the rather gorgeous Anneke took to the stage and urged the crowd to move forward, which they duly did. They then proceeded to play a beautiful 30-minute set that consisted entirely (or certainly largely) of new music. Anneke prowled the stage, using her voice to create wonderful sounds that conjured up references to Bjork in my mind. Jamie created melodies from a vast bank of keyboards and synths, cinematic, vast and expansive, yet also with the capability of drawing you in to make you feel right at home. One new song in particular caught my ears, starting off with lush synths before Jamie created a simple melody that threatened to go ballistic and clubby but just teased and developed into a stunning song. I caught up with Jamie afterwards to say hi and he will be announcing some great news in the near future about their next release. I hope that CAS or Remember Remember win the SAY Award.
On to the main event though. Miaoux Miaoux took to the stage and with a brief but heartfelt thanks for coming, the trio of Julian, Kris and Paul launched into their set. The trio are super tight on stage and the addition of live drums and bass has really pushed the Miaoux Miaoux sound into new territories. Forthcoming single ‘Better For Now’ sounded brilliant, Julian’s vocals were effortless, the rhythm section locked together. ‘Autopilot’ came blasting in, the squelchy synth supplemented by Kris on bass and Julian singing about love found and love lost;
‘I love you but I’m letting you go’.
The album may sound poppy but several of the songs deal with the loss of love, it is nicely balanced by those that sing of the joy of finding and being in love. All of the album (I’ll review that shortly) and the live songs show off Julian’s natural talent for melody and hooks. Old favourite ‘Knitted’ isn’t on the album but it remains a love highlight, as does the instrumental ‘Hrvatski’ which benefits from the live band jamming on it. 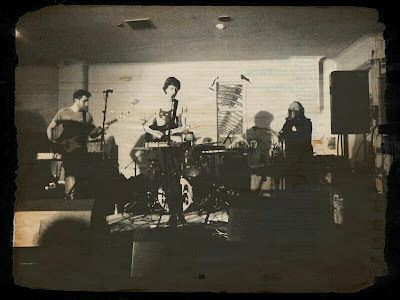 The trio had further guests in the shape of Anna Miles who sang the perfect summer pop song ‘Is It A Dream?’ and provided additional vocals on a few others, while the MC/rapper Profisee sang the delicious ‘Virtua Fighter’ that could easily find it’s way on to a Gorrilaz album. ‘Cloud Computer’ has a beautiful guitar riff that stays in my head for days every time I hear it.
‘Hey Sound’ is Miaoux Miaoux’s real party song, a real dancefloor filler, the only problem was that the cool Glasgow scenesters that made up a large percentage of the crowd were too cool to dance – shame on them. I can’t wait until this album takes off and people do dance at Miaoux Miaoux gigs.
There was no room for ‘Snow’ or the stunning ‘Stop the Clocks’ (my personal favourite from the album) but the band closed with a superb cover of ‘Theme From Great Cities’ by Simple Minds.
Get on to the album, out on Chemikal Underground on Monday.  I promise you, you won't regret it.
Posted by everythingflows at 06:54

Bluehost is ultimately one of the best hosting provider for any hosting services you require.