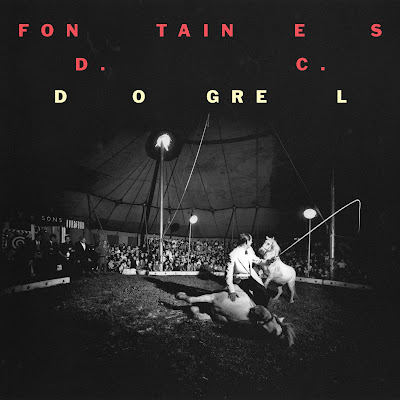 My friend Robbie has been raving about Dogrel by Fontaines D.C for months. So I invited him to write a blog. Fontaines D.C play Glasgow SWG3 on Thursday 21st November.

From the opening pounding beats of Big the album Dogrel lifts you in a tumultuous surge of dirty water, throwing you in all directions, raw guitar strings pulling you further along, guttural vocals before leaving you, somewhat unexpectedly, gently washed up with the smooth melodic sounds of Dublin City Sky. Simply put this is the best album I have heard in 2019… and for some time before that.

The album rushes along at a furious pace, it is not until we reach Roy’s Tune that it breaks rank with what has come before, a fast paced full bodied wall of sound. From the opening bars of Big you can almost taste and smell Dublin, chaotic, loud, dirty, wet, mercurial. However, it doesn’t let up as we crash into Sha Sha Sha and then lurch into the story telling of Too Real, unapologetically demanding an answer ‘Is it too real for ya?’

Described as ‘post-punk’ or punk this Dublin band appear to have produced a classic first album. The gruff narration, rapid fire drum beats, coarse guitar melt together to create the perfect combination. But what perhaps makes it work is the story telling lyrical delivery. The album demands you listen, sit up and be in awe.

Television Screens offers another slight shift in direction, although the beat is still demanding and the lyrics rich the delivery is somewhat smoother, gentler, asking us to stop and think, pause for thought. It lulls us into a soft sense of security before Hurricane Laughter smashes into you, the narration is back taking us round and round, down and down, the harsh oration to the back drop of relentless chords and riffs.

Where as what has comes before is angry and raw, Roy’s Tune tells a similar story but from a different point of view, the daily grind of the city slowly slowly slowly getting the better of you while you fight to hold on for hope and dream of something better, not becoming another cog to be used by the machine, running fast just to stand still, passed by as it dawns on you as what you wanted to be is not going to pass.